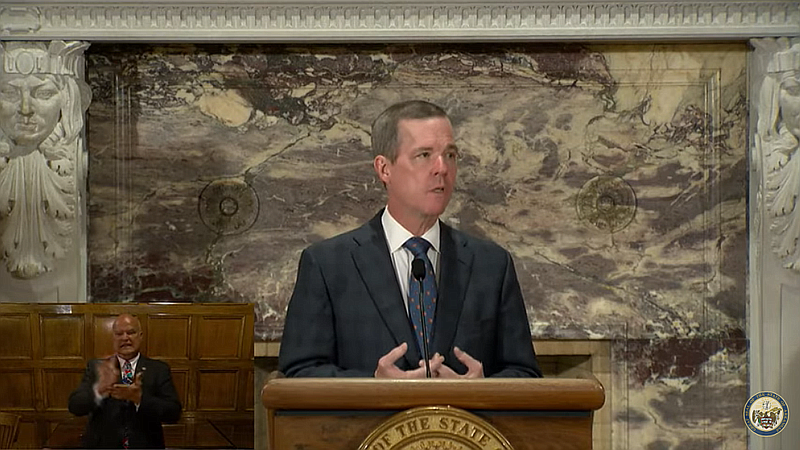 Cam Patterson, chancellor of the University of Arkansas for Medical Sciences, speaks during a news conference Tuesday, June 29, 2021.

Amid an uptick in new coronavirus cases in Arkansas, Gov. Asa Hutchinson on Tuesday urged Arkansans who haven’t been vaccinated to take precautions over the Fourth of July weekend such as wearing masks and practicing social distancing.

“My caution to all Arkansans is, yes you’re going to travel. Yes, you’re going to the lake. Yes, you’re having your backyard cookouts and celebrations. I’ll be joining in that as well, but at the same time, if you are not vaccinated, and you’re going to be participating in those activities, then please take the responsibility to take care of yourself,” Hutchinson said..

“Don’t add to the spread of the virus.”

Hutchinson spoke as the state’s count of coronavirus cases rose by 479.

While slightly smaller than the one the previous Tuesday, it was just the second daily increase in more than three months that has topped 400.

After falling a day earlier, the number of cases in the state that were considered active rose by 196, to 3,365, its highest level since March 9.

The number of people hospitalized in the state with covid-19, however, fell by eight, to 306.

The state’s death toll from the virus, as tracked by the Department of Health, rose by eight, to 5,905.

At his weekly news conference, Hutchinson said the delta variant, which first emerged in India, is becoming the predominant coronavirus strain in Arkansas.

He also acknowledged that the rewards he announced late last month for people to get vaccinated have “not been effective in greatly incentivizing people to do the vaccine.”

The Republican governor said on May 25 that people who received shots the next day or later would each be eligible for a $20 scratch-off lottery ticket or a pair of gift certificates for hunting and fishing licenses worth a total of $21.

He said the state was buying 50,000 lottery tickets and 50,000 pairs of gift certificates and could buy more if the incentives proved effective.

People can claim the rewards at vaccination clinics organized by the Health Department or the Arkansas Foundation for Medical Care or by taking their vaccination cards to one of the department’s local health units.

Meanwhile, the average number of vaccine doses administered each day, including second doses of the Pfizer and Moderna vaccines, has fallen from more than 8,000 during the week just before the incentive program was announced to just over 4,700 a day during the seven-day span ending Tuesday.

Unlike other states, such as Ohio, Arkansas was prohibited by its constitution from setting up a separate drawing for people who were vaccinated and instead had to work through the Arkansas Scholarship Lottery, Hutchinson said.

But he said even Ohio’s lottery program, which has ended, had an “initial splash and effective period of time, but then it declined.”

“I think you’re seeing that nationwide, and so we’ll be fulfilling our commitments there, but we don’t see that as something we want to continue long-term,” Hutchinson said.

He said he didn’t see a need for a change in strategy or a reinstatement of the public health emergency declaration that expired at the end of May.

“I don’t think there’s anything more that the government can do except to be honest with everyone, and that they see the reality,” Hutchinson said.

“The reality is the best incentive, and that is whenever you see the delta variant wreaking havoc and causing people to go to the hospital, it’s a reality check and should cause, encourage people to get vaccinated.”

Cam Patterson, chancellor of the University of Arkansas for Medical Sciences, said at the news conference that the state is “going in the wrong direction, yet again with covid-19 infections.”

He noted that the number of the state’s covid-19 OVERSET FOLLOWS:patients on ventilators, which hit a low for the year of 15 on April 16, has more than tripled over the past several weeks.

After falling a day earlier, the number rose Tuesday by six, to 69.

“With July Fourth holiday coming up and eventually kids going back to school, we have to be concerned that this would be a trend that could continue, and if it does, it would appear that we may be in the beginning of the third surge of covid-19 here in the state of Arkansas,” Patterson said.

He said hospitals in central and northwestern Arkansas, as well as in Jonesboro and Mountain Home, are seeing “evidence of a resurgence in severe cases of covid-19.”

“For the time being, hospitals in southern Arkansas seem to be doing better,” Patterson, a cardiologist, said.

“We hope that that continues for them, but we all need to keep in mind that we may be headed back into the same situation that we were in over the winter when the ability of hospitals to provide care for all comers was severely compromised.”

He said UAMS Medical Center, which had 24 covid-19 patients Tuesday, has had to reestablish its “surge plan” for covid-19 patients and has seen a “substantial increase” in the number needing to be put on ventilators.

Over the past six weeks, four covid-19 patients, including some in their 20s, have required “heart-lung bypass,” he said.

“Fortunately all four of those have been weaned off heart-lung bypass and are in the process of recovering, but that goes to show that our patients now are trending sicker than they were a year ago, and in fact they’re also trending younger,” Patterson said.

He attributed the change to lower vaccination rates among younger people than older ones, as well as the spread of the delta variant.

Compared to the strains that were circulating a year ago, he said the delta variant spreads more easily, “attacks younger individuals, and it produces much more severe disease.”

“This is not losing your sense of smell and a bad case of flu,” Patterson said. “This is immediately coming into the hospital and being put on a ventilator.”

He said he’s concerned about the toll a prolonged surge in hospitalizations would take on hospital staffs.

“We’re now getting close to being 18 months into this, and so we have a lot of people, a lot of front-line caregivers, nurses, physicians, who have been working long hours under dangerous conditions, and I think a lot of them are at the tail end of their resiliency,” Patterson said.

Of the 3,765 people who were hospitalized with covid-19 in the state between Jan. 26 and Monday, only about 65, or 1.7%, were fully vaccinated, Health Department spokeswoman Danyelle McNeill said.

Four of the 988 deaths from covid-19 during that period, or 0.4%, were of fully vaccinated people, she said.

She said about 300 people who had been fully vaccinated had active infections as of Monday, representing 9.5% of the active cases in the state.

The total number of such “breakthrough” infections of fully vaccinated people that have been identified in the state wasn’t available from the Health Department as of Tuesday.

For those worried about side effects from the vaccine, Patterson said the state has more than 300 patients hospitalized with covid-19, but “zero patients who are in our hospitals because of complications from the vaccine.”

He called the vaccines safe, “extraordinarily effective” and, along with social distancing and mask wearing when necessary, “our pathways out of a third surge of covid-19.”

According to the U.S. Centers for Disease Control and Prevention, the number of Arkansans who had received at least one vaccine dose rose Tuesday by 779, to 1,260,136, representing about 41.8% of the state’s population.

Among the states and District of Columbia, Arkansas continued to rank 45th in the percentage of its residents who had received at least one dose and 49th, ahead of only Alabama and Mississippi, in the percentage who were fully vaccinated.

Nationally, 54.2% of people had received at least one dose, and 46.4% were fully vaccinated.

In an email to staff members Tuesday, UAMS College of Medicine dean Susan Smyth cited as “very serious matters” the spread of the delta variant, rising hospitalizations and “growing numbers of fully vaccinated UAMS colleagues who have tested positive for the virus.”

UAMS spokeswoman Leslie Taylor said 21 UAMS employees had tested positive over the past couple of weeks, including 15 who were fully vaccinated.

None of them had been hospitalized as of Tuesday, and most were believed to have been infected outside of work, while congregating with unvaccinated friends or family members, she said.

Only two of the employees had been working with covid-19 patients, she said.

She said none of the employees who had been fully vaccinated had significant symptoms.

“Some thought they had allergies,” Taylor said. “When those didn’t go away, they got tested.”

Citing a rise in covid-19 cases in the community, Baxter Regional Medical Center in Mountain Home on Friday announced that it has stopped allowing visitors in its emergency room “to ensure the health and safety of all patients, their family, and Baxter Regional staff.”

Shortly after announcing the ban, he said the hospital “heard that the governor had just made an announcement that it was now unlawful to restrict visitor access.”

An adult with disabilities must also be able to have visits from a legal guardian or other designated support person.

The cases that were added to Arkansas’ tallies Tuesday included 305 that were confirmed through polymerase chain reaction, or PCR, tests.

The other 174 were “probable” cases, which include those identified through less-sensitive antigen tests.

The state’s death toll rose by eight, to 4,691, among confirmed cases and remained at 1,214 among probable cases.

Among nursing home and assisted-living facility residents, the state’s count of virus deaths remained at 2,092.

The number of people who have ever been hospitalized with confirmed infections in the state grew by 56, to 16,910.

The number who have ever been on ventilators with covid-19 rose by three, to 1,723.