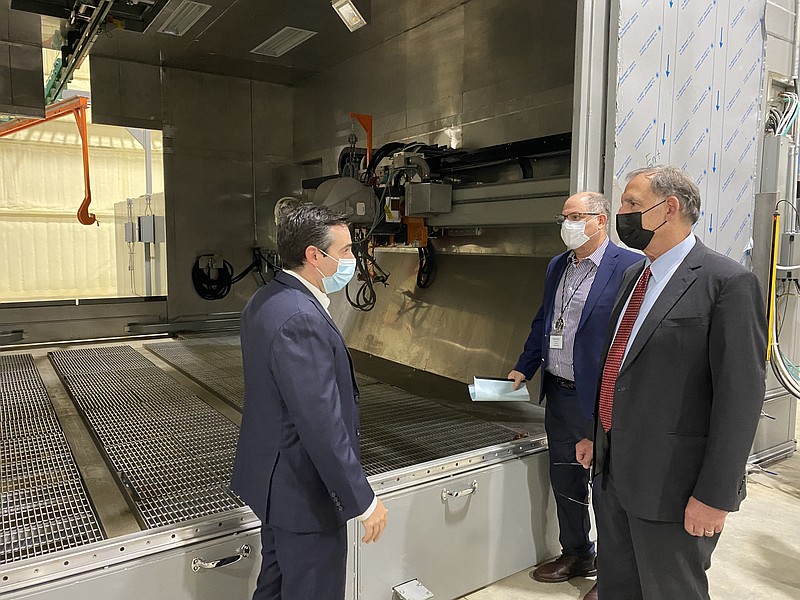 Senator John Boozman made a trip to Magnolia on June 29 for a tour of Amfuel, meeting with key leaders and staff members of the local Department of Defense (DOD) contracted company.

Boozman and his staff were welcomed into the facility by Amfuel President Michael Accordino welcomed Boozman at the door as multiple TVs within the industrial complex featured welcome signs. They were informed that they might need to wear facemasks, due to a “small outbreak of COVID 19 recently discovered in the facility,” one staff member said to the Banner-News.

After being ushered into an adjoining room to the entrance of the building, Boozman joined Accordino and several Amfuel administration members at a conference table as TVs within the room displayed information about Amfuel’s successes.

“We tripled production in 2019, we - the owners- put about $10 million into the business and created 100 jobs,” said Accordino, “but, for the record, in the depths of the bankruptcy, this place had 60 some odd employees. We now have 365 employees.”

Accordino said that despite the COVID 19 pandemic and workers having to call in sick, Amfuel still pushed forward on its plan to modernize its production from the current mid 1900’s technology within the facility to 21st century technology.

Since 1940, Amfuel has been making fuel cells for military, commercial and general aviation markets. The current owners purchased the company’s assets our of bankruptcy on November 20, 2018, keeping the headquarters for the site in Magnolia.

Amfuel’s website claims that they are “”The world’s leading manufacturer and fabricator of self sealing and crash resistant aviation fuel cells.” The self sealing part of the fuel cells occurs when fuel inside the tank makes contact with chemicals within the layers of the tank causing it to expand, according to an Amfuel staff member. They stated they could not elaborate further on this process.

After a short meeting, Accordino led Boozman into the depths of the facility, showing him the autoclaves (oven like devices that bake the fuel cells), an assembly room and a chemicals room where workers paint on chemicals to the fuel cells. Building a fuel cell was described by Accordino as being a near completely manual process, where workers must ensure that every step is done by hand correctly. He further stated that one fuel cell takes nine months to complete and that some issues could cause for the entire fuel cell to be scrapped rather than repairs being made.

After the tour was over, Boozman commented that Amfuel has a great supporting channel and that “we will help you out anyway we can. Just let us know what we need to be doing.”

Accordino acknowledged Boozman’s comment, stating that they would accept all the help given to them. Accordino said that he would need the 53k (Sikorsky Aircraft heavy lift cargo helicopter) to be supported by the Senator and anyway the government could support contract modifications for the F16s (General Dynamics single engine fighter jet) and C130 (Lockheed four-engine turboprop military transport aircraft) fuel cells that the company creates. Accordino stated that he was told by DCMA that there could potentially be an appropriation for fuel cells coming out of the state of Arkansas. He ended by stating that Amfuel is currently “way under” its capacity, which Accordino says he told the DOD about, but is looking for more support on that end.

After the shaking of hands, Boozman said farewell to the Amfuel staff before leaving Magnolia and the 81 year old company behind him.