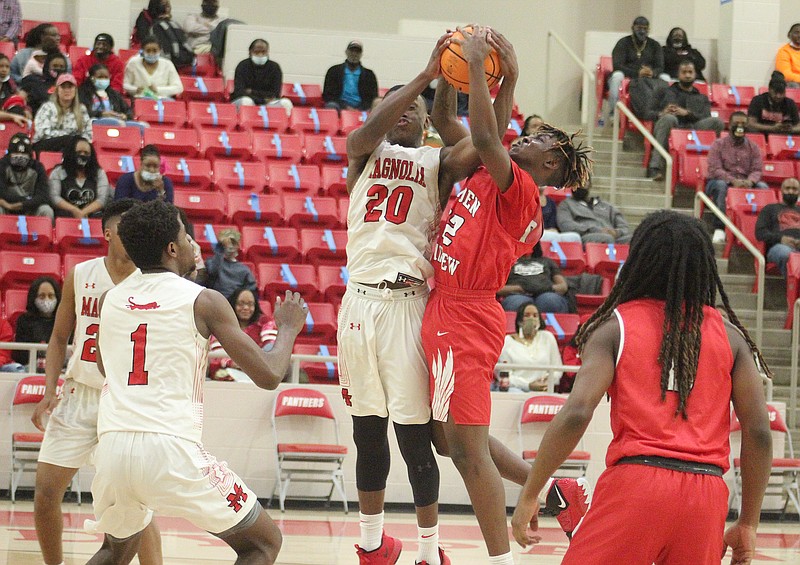 Magnolia’s Derrian Ford and Camden Fairview’s Christian Strahan battle for the ball in Tuesday’s game at Panther Arena. The Panthers rolled past the Cardinals 92-59. Ford and Strahan both finished with 26 points apiece. (Banner-News/Chris Gilliam)

The top-ranked Magnolia Panthers had one of their best shooting efforts of the season as they pounded Camden Fairview 92-59 Tuesday night in 4A-8 Conference action.

“Our offense was probably as good as it has been all year. We made a lot more extra passes and got it to the open guy who knocked down the shot,” said head coach Ben Lindsey. “We hit the right guy at the right time.”

“When you get up and down (the court) as much as we do, you kind of get use to standing, waiting for someone to penetrate and kick the ball out to you. When a team plays good defense, you’re not going to be able to do that all the time. We did a lot better job of running our offense in the half-court as oppose to just being a full-court team,” explained the coach.

The Panthers jumped on the Cardinals (4-5, 3-2 4A-8) early, with Colby Garland getting the first seven points. Two 3-pointers by him and another by Ford helped Magnolia build a 17-2 lead after the first six minutes and they led 20-5 at the first break.

Magnolia added four 3-pointers in the second quarter and built a 27-point advantage before leading by 23, 45-22, at halftime.

Ford opened the second half with a long-range jumper and the Panthers were up 63-38 after three periods. He produced another 3-pointer in the fourth quarter as the Panthers went on to win by 33.

Camden Fairview’s Christian Strahan, with only six first-half points, led the Cardinals with 26, which included three 3-pointers in the fourth quarter.

“I thought our defense was pretty good for the most part, especially on cutting off straight-line drives. Because we are smaller, that’s one thing that’s been giving us problems,” said Lindsey.

Besides COVID being a scare for everyone, the coach said other diseases such as sinus, flu, strep and mono are still a present threat to his team.

Lindsey said it is great to have senior Drevonte Dismuke back with the team.

“I’m always excited when anyone comes back from an injury, especially a senior. I just hope he continues to improve and get better.