Southern Arkansas’ Brooks is GAC Player of the Week 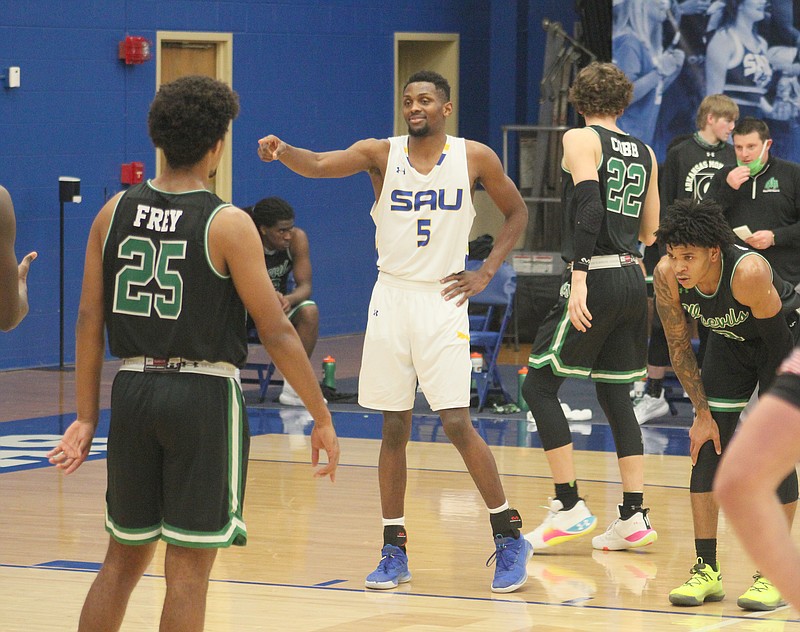 AU’s Jalen Brooks (5) points something out during a game against OBU. He has recorded three consecutive double-doubles and was named this week’s GAC Player of the Week. SAU will host Henderson State Saturday afternoon. (Banner-News/Chris Gilliam)

Against the Bisons, Brooks shot 8-of-15 from the floor and 4-of-7 from 3-point range. He also added an assist and a steal. His 25 points scored are the most by a Mulerider since his career-high 28 points in a home win against Oklahoma Baptist on January 23, 2020.

The 53 points allowed by the Muleriders in Saturday’s win were the fewest surrendered in a road victory against a league member since SAU joined the conference in 2011-12.

“You can’t become satisfied or complacent. Our league is too good to get that way. If you get complacent in our league, you will get your butt whipped,” said Sharpe. “We are excited to be where we are this part of the season, but we still have a lot of work to do.”

When SAU rallied by scoring the game’s final 10 points, Sharpe said SAU is fortunate to have players who have had their backs against the wall. He named several players, including Brooks.

“That’s one of the luxuries of having returning guys in the program. They are not surprise when their backs are against the wall and time is running short. I’m proud of the leadership we have on this team,” said Sharpe.

SAU’s sit atop the standings and will have a week to prepare before welcoming Henderson State into the W.T. Watson Center on Saturday, beginning at 4 p.m.

Following SAU (4-1) in the league standing are Arkansas-Monticello (2-1), Harding (2-1), Arkansas Tech (1-2), Henderson State (1-3) and Ouachita Baptist (0-2). The Muleriders are the preseason favorite to win the Eastern Division.

Saturday will mark the second round of play in the GAC’s Eastern Division. The league was revamped to Eastern (Arkansas) and Western (Oklahoma) divisions because of COVID. Teams are playing a 20-game divisional schedule, which involves battling opponents four times this season.

Some games have already been canceled due to COVID-related issues.