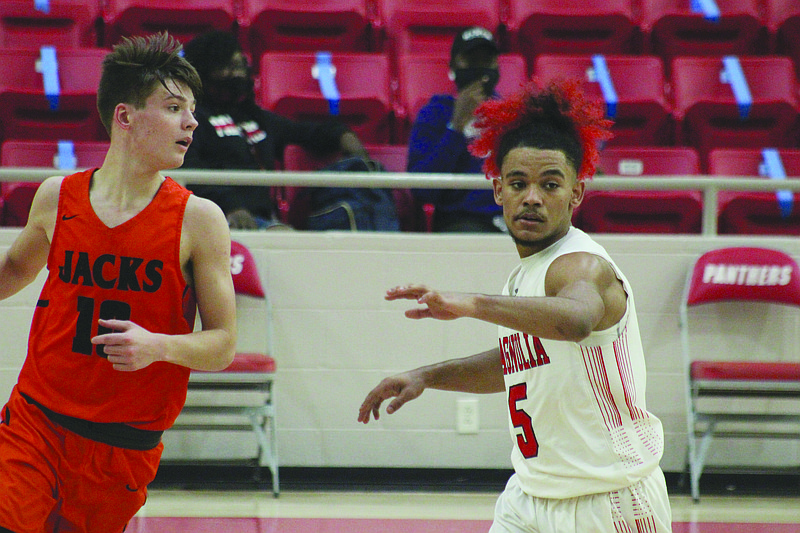 Magnolia junor Adrien Walker plays defense on a Warren Lumberjack during action Wednesday night at Panther Arena. The Panthers will go after their 43rd consecutive win tonight at Star City.

The two-time defending Class 4A State Champion Panthers (9-0, 5-0) will be playing their third game this week after back-to-back victories over Monticello and Warren on Tuesday and Wednesday.

“It’s kind of a state tournament setup when you have to play back-to-back like we did. It is good experience for us to get some back-to-back action,” said Magnolia head coach Ben Lindsey.

According to Lindsey, Star City has a couple of players who are putting up a lot of points. He noted that one has been with them for several years and been one of the leading scorers in the conference. The coach said keeping Star City’s top two guys well under their averages will be a big key for his Panthers.

However, Lindsey has been pleased with the defensive effort of his team so far this season.

The Panthers held Warren to only five first half points Wednesday night and cruised to a 60-27 victory. On Tuesday, Magnolia down Monticello 70-50.

Against Warren’s slow down offensive scheme, Lindsey said his Panthers showed some patience.

“When you play that long on defense, the first thing you want to do on offense is to take some quick shots. We took some quick ones, but were able to score and get out ahead,” said the coach.

Behind 3-pointers from Adrien Walker and Colby Garland, the Panthers led 12-3 after one period. They were up 30-5 at halftime, with Walker and Garland again hitting from 3-point range.

Derrian Ford and Devonte Walker had slam dunks in the third period as Magnolia was up 53-16 when the quarter ended.

“I thought we did a good job defensively and on the boards,” said Lindsey.

Ford led in scoring with 20 points, Garland finished with 15 and A. Walker added nine.

“I’m also really proud of Devonte Walker. He wasn’t at his best physically and not feeling well,” said Lindsey.

After tonight, the Panthers are scheduled to host Camden Fairview on Tuesday and Hamburg next Friday.