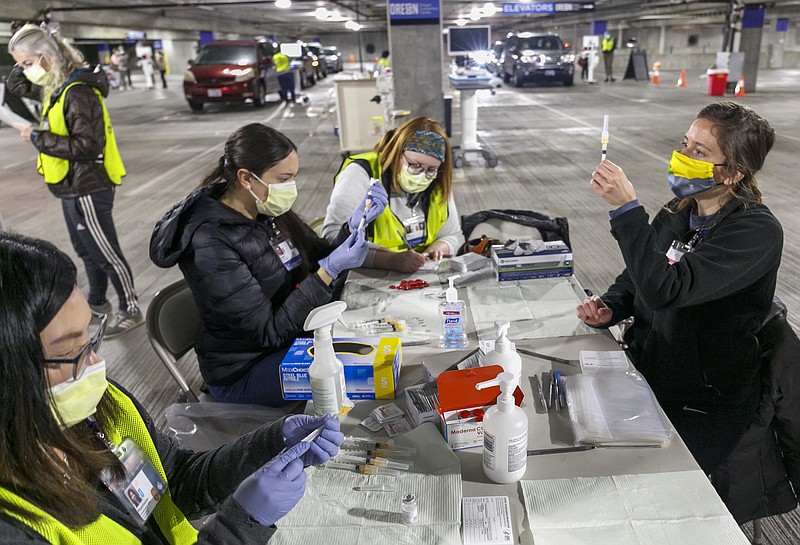 FILE - In this Sunday, Jan. 10, 2021, file photo, Medical professionals from Oregon Health & Science University load syringes with the Moderna COVID-19 vaccine at a drive-thru vaccination clinic in Portland, Ore. The U.S. is entering the second month of the largest vaccination effort in history with a massive expansion of the campaign, opening up football stadiums, major league ballparks, fairgrounds and convention centers to inoculate a larger and more diverse pool of people. - Photo by Kristyna Wentz-Graff/Pool Photo via AP, File

The U.S. is entering the second month of the biggest vaccination drive in history with a major expansion of the campaign, opening football stadiums, major league ballparks, fairgrounds and convention centers to inoculate a larger and more diverse pool of people.

After a frustratingly slow rollout involving primarily health care workers and nursing home residents, states are moving on to the next phase before the first one is complete, making shots available to such groups as senior citizens, teachers, bus drivers, police officers and firefighters.

“It gives you hope,” said David Garvin, a New Yorker who turns 80 next weekend and got a vaccination at a city-run site in Brooklyn on Monday, the first day the state made people over 75 eligible along with various front-line workers. “I’ve been in my room for six months.”

In Southern California, 41-year-old nurse Julieann Sparks received a shot through her car window at a drive-thru vaccination site that opened in a parking lot near the San Diego Padres’ baseball stadium.

“It really truly was a hassle-free experience,” she said. After receiving a vaccination, drivers had to stay there for 15 minutes so that they could be watched for any reaction.

Similarly, in Britain, where a more contagious variant of the virus is raging out of control and deaths are soaring, seven large-scale vaccination sites opened Monday at such places as a big convention center in London, a racecourse in Surrey and a tennis and soccer complex in Manchester.

Across the U.S., where the outbreak has entered its most lethal phase yet and the death toll has climbed to about 375,000, politicians and health officials have complained over the past several days that too many shots were sitting unused on the shelves because of overly rigid adherence to the federal guidelines that put an estimated 24 million health care workers and nursing home residents at the front of the line.

About 9 million Americans have received their first shot, or 2.7% of the U.S. population, according to the Centers for Disease Control and Prevention. Experts say as much as 85% of the population will have to be inoculated to achieve “herd immunity” and vanquish the outbreak.

Many states are responding by throwing open the line to other groups and ramping up the pace of vaccinations, in some cases offering them 24-7.

In California, one of the deadliest hot spots in the U.S., the drive-thru operation outside the San Diego ballpark is gearing up to inoculate 5,000 health care workers a day. Dodger Stadium in Los Angeles will also be pressed into service by the end of the week, with officials saying it will be able to vaccinate 12,000 people per day when it is fully running.

At the same time, California hit another gloomy milestone, surpassing a death toll of 30,000. It took the state six months to record its first 10,000 deaths but barely a month to go from 20,000 to 30,000. Over the weekend, California reported a two-day record of 1,163 deaths. Hospitals are reaching the breaking point.

About 584,000 doses have been administered in California, or about 1.5% of the population.

Arizona, with the highest COVID-19 diagnosis rate in the U.S., began dispensing vaccinations Monday in a drive-thru, round-the-clock operation at the suburban Phoenix stadium that is home to the NFL’s Arizona Cardinals. Shots are being offered to people 75 and older, teachers, police and firefighters.

In Texas, vaccine megasites opened at the Alamodome in San Antonio and on the Texas state fairground in Dallas. Nearly 4,000 people were vaccinated Saturday at Minute Maid Park, the home of baseball’s Houston Astros.

Detroit’s call center was jammed with more than 100,000 calls Monday as the city took appointments for shots at the downtown TCF convention center, starting Wednesday. Officials plan to schedule 20,000 appointments over the next month for people 75 and older. Police officers and bus drivers can start getting vaccinated there at the end of the week.

“We do not have the capacity to answer questions from people under 75 or non-Detroiters about vaccinations in general,” said Detroit’s chief operating officer, Hakim Berry. “If you are not eligible, please do not tie up the call lines.”

The slow first stage of the U.S. campaign has been blamed in part on inadequate funding and guidance from Washington and a multitude of logistical hurdles at the state and local level that have caused confusion and disorganization.

As Colorado moves into its next phase of vaccine distribution for people 70 and older, frustration is building among senior citizens who say they have received little or no direct communication from local public health officials.

Joyce Ballotti, 85, and her 94-year-old husband went to a vaccination site in Pueblo, Colorado, on Monday that was supposed to begin at 9 a.m. But around 8:45 a.m., they were turned away because it had run out of vaccine.

“When we saw that exit locked, we said, ‘Uh-oh, the city has screwed up again,’” Ballotti said.

A police officer managing traffic waved them away, and they received no guidance on other vaccine sites. Ballotti said she is angry and frustrated about the process.

“I’m about ready to get it not at all,” she said, noting that the couple’s son had taken off from work to drive them. “I can’t ask my son to spend his time on fruitless errands.”

There were snags as well in Georgia, where the plan to expand access to people over 65 got off to a rocky start. The websites of at least two public health districts crashed Monday, and other districts reported overwhelming demand for appointments.

Florida, the longtime retirement haven with one of the biggest concentrations of elderly people in the country, is using Hard Rock Stadium in Miami Gardens to dispense shots.

A little over 402,000 doses have been administered in Florida since mid-December, or just under 2% of its population.

Rather than wait for the first designated group of recipients under the federal guidelines to get their shots, Gov. Ron DeSantis has moved to open up vaccinations to people 65 and over.

That step has been met with huge demand, with senior citizens standing in line in the overnight chill or sleeping in their cars — a spectacle that has alarmed many people. DeSantis said drive-thru sites will be ramped up in the coming days.

In New York City, the epicenter of the outbreak last spring, two 24-7 sites opened and several more are expected to be up and running over the next two weeks. Appointments for the midnight-to-4-a.m. shift on Tuesday were snapped up quickly in what Mayor Bill de Blasio pointed out is, after all, “the city that never sleeps.”

Saad Omer, director of the Yale Institute for Global Health, said it is reasonable to speed things up and move on to the next group of people as long as health workers and nursing home residents continue being given shots at the same time.

“Our country should be able to walk and chew gum when comes to its immunization program,” he said.