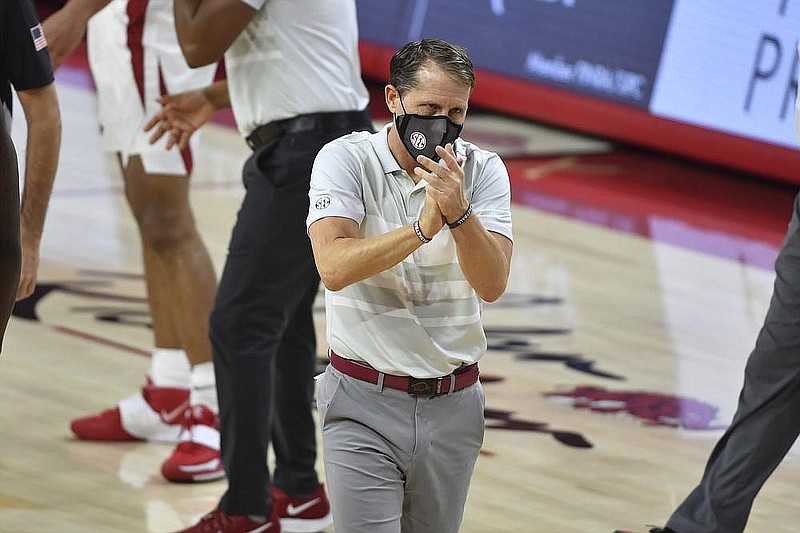 Arkansas coach Eric MUsselman reacts during a time out against Georgia Saturday at Bud Walton Arena in Fayeteville. The Hogs (10-2, 2-2) won by 30 and will take on the LSU Tigers (8-2, 3-1) at 6 p.m. Saturday at the Maravich Assembly Center in Baton Rouge, La. - Photo by Associated Press/Michael Woods

FAYETTEVILLE – Eric Musselman didn’t need to take any melatonin gum-mies to try to get some rest Saturday night.

The University of Arkansas men’s basketball coach said h i s w i f e, Danyelle, sometimes p u t s t h e chewy sleep aid out for him to take after a game, but he surely had sweet d r e a m s without any gummies after the Razorbacks pounded Georgia 99-69 at Walton Arena.

“No melatonin,” Mussleman said. “I’m going to be good.”

“We had a very, very sour, sour taste in our mouth after losing two,” Musselman said. “The Missouri game, we could not have played any worse. Then we thought we battled hard at Tennessee, and that was a game we could have won.”

Before beating Georgia, the Razorbacks had been 0-7 in SEC games the past two seasons when missing a starter because of an injury.

Arkansas lost all five SEC games it played last season without guard Isaiah Joe — a rookie with the Philadelphia 76ers who made his first NBA start Saturday — as he recovered from knee surgery.

The Razorbacks missed forward Justin Smith against Missouri and Tennessee after he underwent surgery that is expected to continue to keep him sidelined this week in road games at LSU (8-2, 3-1) and Alabama (9-3, 4-0).

“I feel like we needed the confidence boost coming off of two tough losses,” said Arkansas freshman forward Jaylin Williams, who had nine rebounds off the bench against Georgia.

“Everyone’s building confidence,” Davis said. “That’s good for Justin, because it’s going to open things up for him once he comes back.”

Georgia came into the game averaging 81.4 points after a 94-92 overtime loss at LSU, but Arkansas’ transition defense stymied the Bulldogs while the Razorbacks kept their offense in high gear.

Arkansas had 29 fast-break points, which were its most since having 30 in last season’s 91-43 opening victory over Rice.

The Razorbacks’ 99 points matched their most in an SEC game in Musselman’s two seasons along with a 99-90 victory over LSU last season in Walton Arena.

Arkansas also got some payback for a 99-89 loss at Georgia last season.

“When you play an up-and-down team you have a choice,” Musselman said. “The choice is do you slow the game down and make it more of a half-court game? Or do you open it up and make it a track meet?”

The Razorbacks made it a track meet in which they left the Bulldogs in the starting blocks during the second half when they had a 56-32 advantage.

“Over in our locker room we had big signs that said ‘Win the Race!’ ” Musselman said. “So we were putting our track shoes on.”

Davis made his second start in three games. He started against Missouri, then came off the bench at Tennessee.

“The reason Devo was inserted into the lineup [against Georgia] was so he could guard [Sahvir] Wheeler,” Musselman said of Georgia’s point guard. “Wheeler is as fast as any player in our league.

“Devo did a great job of following the game plan, not over-gambling and not being overanxious and just trying to keep Wheeler in front of him, which that was the reason he was in then lineup. And offensively, he was phenomenal for us.”

Musselman said he was pleased with the ball movement, which included 189 passes — several long ones that led to quick baskets.

“We felt like we could shift their defense if we could get some advance passes in transition,” Musselman said. “Even after made baskets, instead of dribbling the ball to advance it up the court, if we could get a few more pitch-aheads then it would really help us.

“And I thought our pitchaheads and our advance passes were as good as we’ve had all year.”

Georgia came into the game with a plus-9.4 rebounding margin, but the Razorbacks beat the Bulldogs 40-30 on the boards.

“I thought we were great at defending without fouling,” Musselman said. “I’m not sure how we became this physical team at Tennessee. I didn’t know we were a high foul team until I walked out of that arena.”

“I thought we played really good at Tennessee,” Mussel-man said. “Maybe I had a little bit larger rotation, and maybe I should have shrunk it for a couple minutes there.

“But we played a really good 35 minutes against Tennessee and we had five minutes of play that we didn’t really play well.

“That game was really just about the fouls, the free throws attempted. We’re going to do a drill where we tape tennis balls to our hand to try to continue to defend without fouling.”

Beating Georgia came a week after Musselman said Arkansas “stunk” against the Tigers in the Razorbacks’ only home loss of the season.

“I’m happy,” Musselman said. “I thought we played great, I really did.

“I think the players are feeling good in the locker room. I think that was a great confidence boost for our guys after two tough games.”