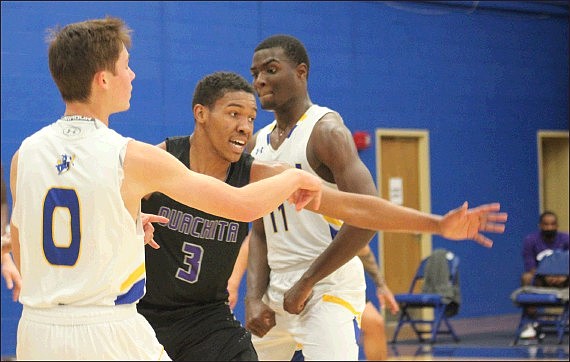 Southern Arkansas’ Dodge Brown (0) gets a pick from teammate Victor Ihrihri (11) during Saturday’s 69-58 GAC win at the W.T. Watson Center. The Muleriders will host Arkansas-Monticello at home tonight. - Photo by Chris Gilliam

There were no fans in the stands as Southern Arkansas moved to 2-0 during its GAC home opener Saturday night.

“We are trying to hang a banner here in W.T. Watson, which is something that hasn’t been done in the D-II era since who knows when. It’s about chasing excellence in everything. Don’t get me wrong, I am glad were 2-0 but I have a different perspective than the players,” SAU head coach Andy Sharpe said after the 69-58 win over Ouachita Baptist.

SAU will look to add another victory tonight when it hosts UAM. Tip-off will follow a women’s game that begin at 5:30 p.m.

Sharpe, saying the Boll Weevils will be tough and talented like always, is expecting a physical contest.

“We have to be ready to go and finish a game like champions. If we play tonight like we played the second half against OBU, bad things are going to happen for SAU. We have to get one percent better each game and go from there,” said Sharpe. After tonight, SAU will play at Arkansas Tech in Russellville on Thursday and travel to Searcy the following Saturday to battle Harding.

Regarding the win over OBU, three Muleriders scored in double figures. Devante Brooks led with 18, Aaron Lucas added 17 and Blake Bogers finished with 15.

“We didn’t play very well in the second half,” stated Sharpe. The Muleriders led from start to finish, going up by 19 late in the first half.

The Tigers stayed within 13 points through the first 12 minutes of the second half, but a slam dunk by Brooks and a Lucas layup pushed the lead up to 17 with just under three minutes to play. OBU got to with 10 during closing seconds before falling by 11.

“We didn’t finish that game the way a regular season champion would finish a game. We had 17 turnovers, missed too many free throws, got crushed on the offensive glass, and didn’t shoot well from 3-point in the second half. That’s not acceptable,” said the coach. “We let them hang around and credit goes to Ouachita, who were not going to roll over and die.”

He agreed an assist by Lucas to Brooks that resulted in a monstrous slam midway the second half would have wooed the Mulerider crowd.

“You don’t get that energy from the crowd. But we coach our bench just as hard as we coach the players on the floor. Everybody has a job to do and the bench did a good job of trying to stay engaged,” he said.

The coach also noted that with Jalen Brooks in foul trouble, Victor Ihrihri provided some quality minutes on the floor.

“He made a couple of 3-pointer, but has to get better with the free throws. Overall, I was pleased with the outcome but we just have to clean up some parts to it,” added Sharpe.

“We have to be ready to go and finish a game like champions.”