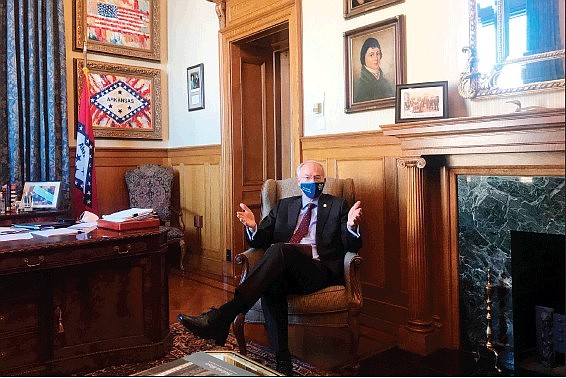 Arkansas Gov. Asa Hutchinson speaks in his office at the state Capitol in Little Rock, Ark. on Monday, Jan. 4, 2021. Hutchinson is advocating for a hate crimes bill in the upcoming legislative session, but the measure faces some obstacles. - Photo by AP Photo/Andrew DeMillo

LITTLE ROCK, Ark. (AP) — A push to finally enact a hate crimes law in Arkansas, a state with a history of white supremacists, appeared to have all the elements for success: a popular Republican governor who made it a priority, major corporations endorsing the idea and support from communities where hate groups have flourished.

But the chance to end Arkansas’ distinction as one of only three states without such a law is in jeopardy even before lawmakers return to the Capitol. Conservatives have moved to defeat the bill in the majority-GOP Legislature, though similar measures have passed in other red states.

Georgia in June became the latest to enact a bill, leaving Arkansas, South Carolina and Wyoming as the remaining outliers.

The bill’s dimming prospects threaten a legislative priority for Gov. Asa Hutchinson, who as a U.S. attorney prosecuted racist militia members but without a hate crimes law’s specific penalties.

If victims are targeted because of their race, ethnicity or sexual orientation, “we have to express as a society that should not be tolerated and that we should have enhanced penalties for that,” Hutchinson told The Associated Press this week.

The proposal in Arkansas would impose up to 20% additional jail time or fines for targeting someone because of several factors, including race, religion, sexual orientation or gender identity. Prosecutors would have to prove the victim’s attributes was a substantial factor in the crime being committed.

Similar proposals have stalled over the years, but the idea gained new momentum after Hutchinson made it a personal cause and cited the threat of mass shootings, including one at a Texas Walmart in 2019 that federal authorities prosecuted as a hate crime.

Hate groups have long claimed Arkansas as a haven. Dozens of members of the New Aryan Empire, a white supremacist group that prosecutors said engaged in drug trafficking and witness intimidation, were indicted on federal charges in the state last year.

In the 1980s, as a U.S. attorney, Hutchinson put on a bulletproof vest to negotiate the end of a standoff with a white supremacist group in the Ozark Mountains. Hutchinson noted that the case was before a federal hate crimes statute was in place.

“I got a 20-year sentence for racketeering against the leader of this group. I’d love to have had 25 years in there with a good enhancement for hate crime,” he said.

The bill has strong support from Democrats, but conservatives have pressed familiar objections to including LGBT protections.

“Unfortunately, this law creates more inequality by favoring special categories of people based on their sexual orientation, gender identity, and other characteristics,” Jerry Cox, executive director of the Family Council, said last year.

Hutchinson and outgoing Senate President Jim Hendren have refused to remove sexual orientation or gender identity as categories under the bill. The bill has also faced a wider complaint from critics who say the enhanced penalties single out certain groups.

“If you’re going to do it for one group of people, why wouldn’t you do it for another?” said incoming Senate President Jimmy Hickey, who said he doesn’t believe the bill can pass.

The potential for hate crimes laws getting approved is mixed in the other remaining states. In South Carolina, more than 80 businesses signed a letter last month endorsing such a measure, but South Carolina’s Republican governor, Henry McMaster, also a former prosecutor, has questioned the need. Prospects are more uncertain in Wyoming, where the murder of gay college student Matthew Shephard in 1998 sparked a national movement for hate crimes legislation.

“I think all three states realize that none of them want to be the state to hold the distinction of being the last state to have a hate crimes law,” said Aaron Ahlquist, director of the Anti-Defamation League’s south central region.

Advocates in Arkansas are hoping business and community groups will aid their efforts. Bentonville-based Walmart and Springdale-based Tyson Foods have also said they support enacting a hate crimes law.

The city of Harrison and surrounding Boone County, where the Ku Klux Klan and other white supremacists have been active over the years, last year passed resolutions urging the Legislature to pass a hate crimes measure.

Supporters acknowledge the challenges but said they remain hopeful that the bill can reach Hutchinson’s desk.

“Anytime a bill has been defeated for 20 years, it takes a while to turn that train around,” Hendren, who is also Hutchinson’s nephew, said.