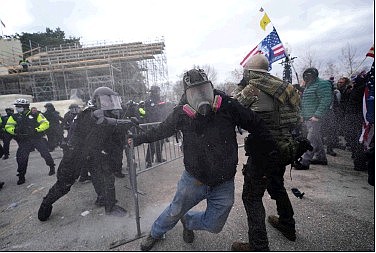 Trump supporters try to break through a police barrier, Wednesday, Jan. 6, 2021, at the Capitol in Washington. As Congress prepares to affirm Presidentelect Joe Biden’s victory, thousands of people have gathered to show their support for President Donald Trump and his claims of election fraud. - Photo by AP Photo/Julio Cortez

Only a few dozen guarded the West front of the U.S. Capitol when they were rushed by thousands of pro-Trump demonstrators bent on breaking into the building.

Armed with metal pipes, pepper spray and other weapons, the mob pushed past the thin police line, and one protester hurled a fire extinguisher at a officer, according to video widely circulated on YouTube.

They breached the line moments later, and rioters soon broke into the building, taking over the House and Senate chambers and running wild in Statuary Hall and other hallowed symbols of democracy. The mob ransacked the place, smashing windows and waving Trump, American and Confederate flags. The lawmakers who were voting to affirm President-elect Joe Biden’s victory were forced into hiding for hours.

Throughout the melee, police officers were injured, mocked, ridiculed and threatened. One Capitol Police officer, Brian Sicknick, died Thursday night from injuries suffered during the riot. The melee was instigated by a mob of supporters of President Donald Trump who have professed their love of law enforcement and derided the mass police reform protests that shook the nation last year following the police killing of George Floyd in Minneapolis.

“We backed you guys in the summer,” one protester screamed at three officers backed against a door by dozens of men screaming for them to get out of their way. gation publicly and spoke to The Associated Press on condition of anonymity.

Another disturbing video shows a bloodied police officer screaming for help as he’s crushed by protesters inside the Capitol building. The young officer is pinned between a riot shield and metal door. Bleeding from the mouth, he cries out in pain and screams, “Help!”

Other images show police completely overwhelmed by protesters who shoved, kicked and punched their way into the building. In one stunning video, a lone police officer tries to hold off a mob of demonstrators from cracking into the lobby. He fails.

Protesters attacked police with pipes, sprayed irritants and even planted live bombs found in the area.

Sicknick’s family said Friday that he had wanted to be a police officer his entire life. He served in the New Jersey Air National Guard “When the whole country hated you, we had your back!”

The rampage shocked the world and left the country on edge, forcing the resignations of three top Capitol security officials over the failure to stop the breach. Lawmakers have demanded a review of operations and an FBI briefing over what they called a “terrorist attack.”

Sicknick was the fifth person to die because of the Capitol protest violence.

One protester, a woman from California, was shot to death by Capitol Police, and three other people died after “medical emergencies” related to the breach, including at least who died of an apparent heart attack.

Sicknick, 42, was hit in the head with a fire extinguisher during a struggle, two law enforcement officials said, although it was not clear if he was the officer shown in the video. The officials could not discuss the ongoing investibefore joining the Capitol Police in 2008. Many details regarding the incident remain unknown, and Sicknick’s family urged the public and news media not to make his death a political issue.

Still, the riot — and Sicknick’s death — focused renewed attention on Capitol Police, a force of more than 2,300 officers and civilian employees that protects the Capitol, lawmakers, staff and visitors. The agency has an annual budget of about $515 million.

And as the mob descended on the building Wednesday, Justice Department leaders reached out to offer up FBI agents. Capitol Police turned them down both times, according to senior defense officials and two people familiar with the matter.

Despite plenty of warnings of a possible insurrection and ample resources and time to prepare, police planned only for a free speech demonstration.

Like many other agencies, the Capitol Police have been hit hard by COVID-19, with frequent schedule changes for officers and many forced to work overtime to fill out rosters. The pandemic has put the police under strain going into the new session of Congress and the Jan. 20 inauguration of President-elect Joe Biden.