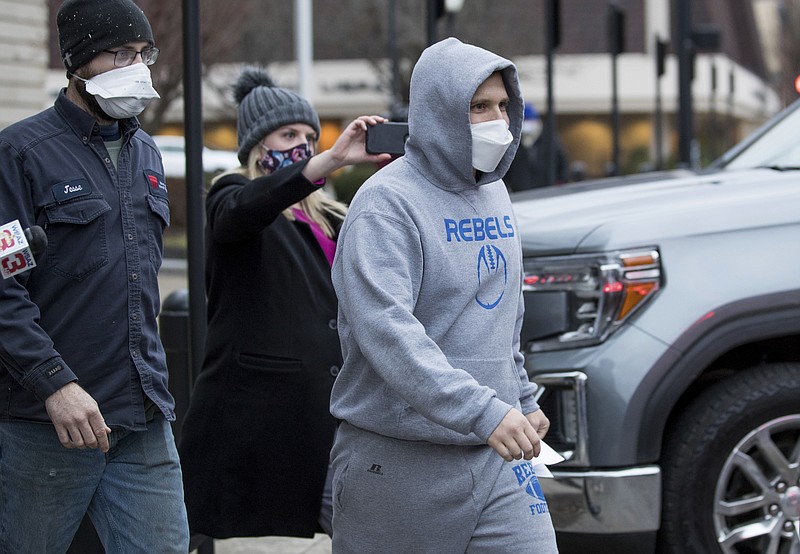 West Virginia Delegate Derrick Evans exits the Sidney L. Christie U.S. Courthouse and Federal Building after being arraigned on federal charges Friday, Jan. 8, 2021, in Huntington, W.Va. The West Virginia state lawmaker has been charged with entering a restricted area of the U.S. Capitol after he livestreamed himself rushing into the building with a mob of President Donald Trump's supporters. (

CHARLESTON, W.Va. — A Republican West Virginia state lawmaker has been federally charged for entering a restricted area of the U.S. Capitol after he live-streamed himself rushing into the building with a mob of President Donald Trump's supporters.

Ken Kohl, a top deputy federal prosecutor in Washington, announced the case against state Del. Derrick Evans on a call in which he presented dozens of new charges against members of the crowd that violently stormed the Capitol on Wednesday.

He appeared before a federal judge in Huntington, West Virginia, on Friday afternoon after being arrested, news outlets reported. If convicted, he faces up to a year and a half in federal prison for two misdemeanors: entering a restricted area and disorderly conduct.

Federal Magistrate Judge Cheryl Eifert released him on his own recognizance. Wearing a hoodie and a face mask to protect against the coronavirus, Evans did not answer reporters' questions as he left the courthouse and quickly got into a vehicle.

His lawyer, John Bryan, said in an email that he hadn't seen the complaint against Evans and couldn't comment.

"He's a fine man. And thank you, Mr. Trump, for inviting a riot at the White House," a woman identifying herself as Evans' grandmother told station reporters as her grandson was being taken into custody.

Legislators from at least seven other states traveled to Washington, D.C., to back Trump and demonstrate against the counting of electoral votes confirming Democrat Joe Biden's victory.

It's unknown if any other elected official joined the attack on the Capitol.

In Tennessee, legislation was introduced Friday that would require state authorities to investigate any resident who participated in Wednesday's events. The proposal from Democratic state Rep. London Lamar also states that any "seditious and treasonous acts" at the U.S. Capitol by an elected official would constitute grounds for immediate removal.

The legislation comes days after Republican Tennessee state Rep. Terri Lynn Weaver attended the demonstrations, which she described as "epic." It's unclear if Weaver entered the Capitol.

A growing number of Republicans and Democrats said they want to expel Evans from the legislature if he does not resign. Bryan said late Thursday that his client did not commit a crime and doesn't plan to step down.

No one in the office of West Virginia Republican House leader Roger Hanshaw responded to an email requesting comment.

In his now-deleted video, widely shared online, Evans is clamoring inside a jam-packed Capitol building doorway, trying with others to push his way inside. He hollers along with other Trump loyalists and fist-bumps a law enforcement officer who let them in.

Evans' lawyer has said he was acting as an amateur journalist recording the day's events and that he was not involved in violence.

After pushing into the building, video shows Evans milling around the Capitol Rotunda, where historic paintings depict the republic's founding, and imploring others to not vandalize artwork and busts. Some of the pieces were later vandalized.