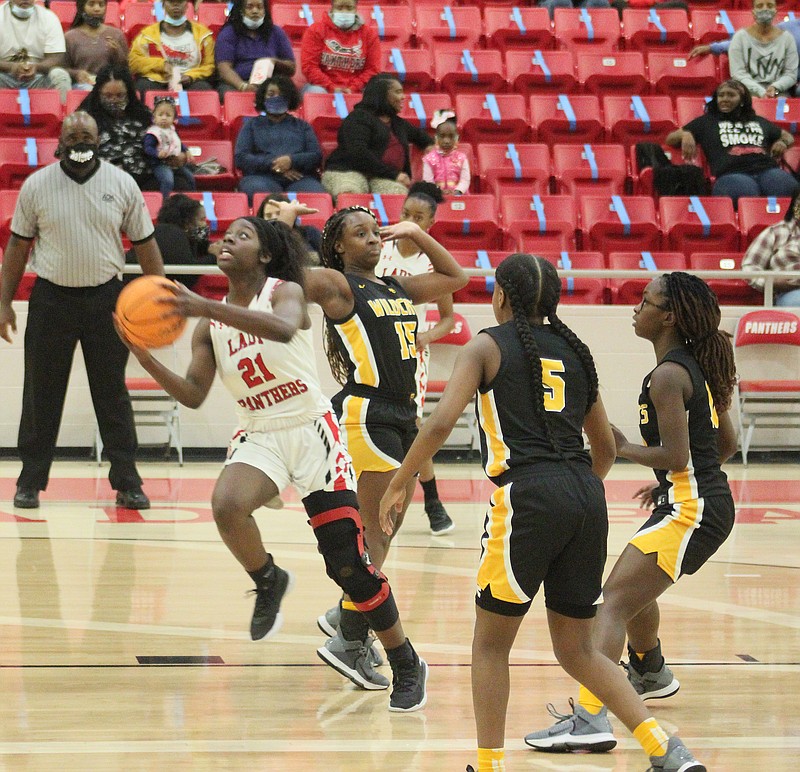 Magnolia’s Keshunti Brantley goes up for two points during a 49-47 win over Watson Chapel Tuesday night at Panther Arena. - Photo by Chris Gilliam

“Keshunti is our leader. Last week, I don’t know who she was after scoring only two points. But she showed us who she really was in this game,” said Lady Panthers’ head coach Donnell Ford. “She played great defense, got several rebounds and scored 18 points. Her free-throw shooting wasn’t all that good, but she had an overall good game.”

Being an all-state player, Ford said good quality leadership has to come from Brantley.

The battle between the Lady Panthers and Lady Wildcats was back-and-forth. The game was deadlocked three times during the first five minutes, before Watson Chapel used a 7-0 run to end the period and led 14-7.

In the second quarter, Kelcy Lamkin opened with a bucket and was followed by back-to-back baskets by Beaunca Willis and Janayi Baker. The spurt closed the gap to 14-13, before Denasia Massey hit a 3-pointer to push the lead to four.

Lamkin, who had 13 points for Magnolia, followed with a conventional three-point play. The Lady Panthers went on to lead 21-20 at halftime.

The lead switched hands three times and was tied once in the third quarter. Brantley, Baker and Lamkin led the Lady Panthers on a 7-0 run to make it 35-28 at the two-minute mark. Watson Chapel answered with back-to-back 3-pointers and trailed 35-34 at the buzzer.

Watson Chapel fought back and trailed by two, 49-47, with 16.5 seconds remaining. Brantley missed the front end of a one-and-one free throw attempt with 5.5 seconds left, but time expired before Watson Chapel got a shot off.

“They are a good, solid and well-coached team. For us to come out, beat them and win our second game in conference is good for us,” said Ford. “The game plan was to take away their inside. We were able to do that and it gave us a chance to win.”

Ford said he was pleased with the play of his point guard Baker.

“She got other people involved, stayed on the court without fouling and played under control,” he noted. “The point guard runs everything and the ball goes through her. To have her under control and on the floor was big.”

The coach also praised others for her effort, including Satiya Rone who battled for rebounds against a bigger Watson Chapel team.

The Lady Panthers will host Crossett at 6 p.m. Friday, followed by games against Monticello, Warren and Star City next week.