In call, Trump asks for victory in Georgia

Want to find votes, secretary of state told by Compiled by Democrat-Gazette Staff From Wire Reports | January 4, 2021 at 7:24 a.m. 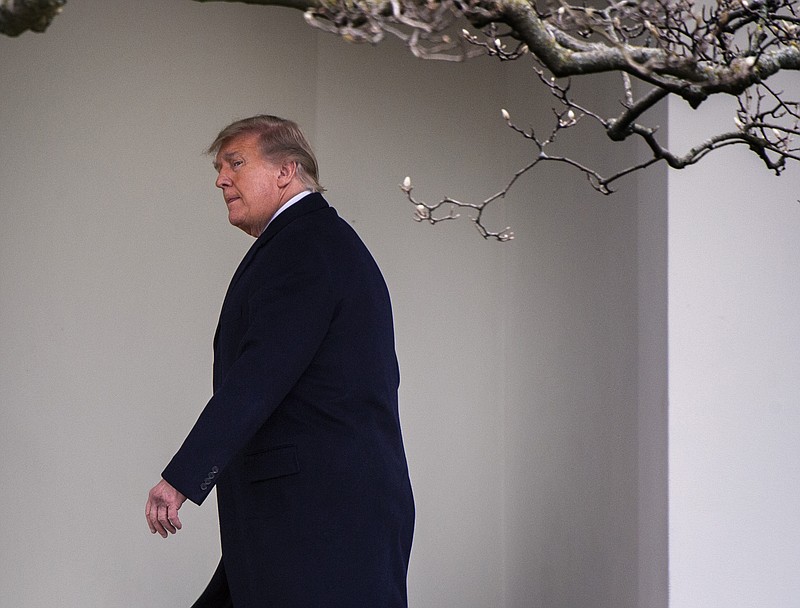 The Washington Post obtained a recording of the conversation in which Trump alternately berated Raffensperger, tried to flatter him, implored him to act and threatened him with vague criminal consequences if he refused to pursue Trump's claims, at one point warning that Raffensperger was taking "a big risk."

Throughout the call, Raffensperger and his office's general counsel rejected Trump's assertions, explaining that the president is relying on debunked theories and that President-elect Joe Biden's 11,779-vote victory in Georgia was fair and accurate.

"The people of Georgia are angry, the people in the country are angry," he said. "And there's nothing wrong with saying, you know, that you've recalculated." He also appealed to Raffensperger's party loyalty, saying, "You're a Republican!"

Raffensperger responded: "Well, Mr. President, the challenge that you have is, the data you have is wrong."

"We don't agree that you have won," Raffensperger told the president.

At another point, Trump said: "So look. All I want to do is this. I just want to find 11,780 votes, which is one more than we have. Because we won the state."

"There's no way I lost Georgia," Trump said, a phrase he repeated again and again on the call. "There's no way. We won by hundreds of thousands of votes."

[Video not showing up above? Click here to watch » https://www.youtube.com/watch?v=AW_Bdf_jGaA]

Several of his allies were on the line as he spoke, including White House Chief of Staff Mark Meadows and conservative lawyer Cleta Mitchell, a prominent GOP attorney.

The White House, the Trump campaign and Meadows did not respond to requests for comment. Raffensperger's office declined to comment.

The call from the White House to Raffensperger's office came at 2:41 p.m., after 18 other calls by the White House switchboard to the office during the past two months, according to a person familiar with the conversation. Saturday's call was the first time Raffensperger had talked with Trump directly despite the president's repeated tweets disparaging him.

Officials in the secretary of state's office recorded the call, and Raffensperger told his advisers that he did not want to release a transcript or a recording unless the president attacked state officials or misrepresented what had been discussed, according to a person familiar with his direction.

On Sunday, Trump tweeted that he had spoken to Raffensperger, saying the secretary of state was "unwilling, or unable, to answer questions such as the 'ballots under table' scam, ballot destruction, out of state 'voters,' dead voters, and more. He has no clue!"

Raffensperger responded with his own tweet: "Respectfully, President Trump: What you're saying is not true."

Trump's pressure campaign on Raffensperger is the latest example of his attempt to change the outcome of the Nov. 3 election through personal outreach to state Republican officials. He previously invited Michigan Republican leaders to the White House, pressured Republican Georgia Gov. Brian Kemp in a call to try to replace that state's electors, and asked the speaker of the Pennsylvania House of Representatives to help reverse his loss in that state.

His call to Raffensperger came as scores of Republicans have pledged to challenge the Electoral College's vote for Biden when Congress convenes for a joint session Wednesday. Republicans do not have the votes to thwart Biden's victory, but Trump has urged supporters to travel to Washington to protest the outcome, and state and federal officials are bracing for clashes outside the Capitol.

Trump issued a vague threat to both Raffensperger and Ryan Germany, the secretary of state's general counsel, suggesting that if they don't find that thousands of ballots in Fulton County have been illegally destroyed to block investigators -- an allegation for which officials have reported no evidence -- they would be subject to criminal liability.

"That's a criminal offense," he said. "And you can't let that happen. That's a big risk to you and to Ryan, your lawyer."

Trump also told Raffensperger that failure to act by Tuesday would jeopardize the political fortunes of David Perdue and Kelly Loeffler, Georgia's two Republican senators whose fate in that day's runoff elections will determine control of the U.S. Senate.

Trump said he plans to talk about the alleged fraud today, when he is scheduled to lead an election eve rally in Dalton, Ga.

"You have a big election coming up and because of what you've done to the president -- you know, the people of Georgia know, that this was a scam," Trump said. "Because of what you've done to the president, a lot of people aren't going out to vote, and a lot of Republicans are going to vote negative, because they hate what you did to the president. OK? They hate it. And they're going to vote. And you would be respected, really respected, if this can be straightened out before the election."

Raffensperger replied: "We believe we do have an accurate election."

Trump's conversation with Raffensperger put him in legally questionable territory, legal experts said. By exhorting the secretary of state to "find" votes and to deploy investigators who "want to find answers," they said, Trump appears to be encouraging him to doctor the outcome in Georgia.

Trump's apparent threat of criminal consequences if Raffensperger does not act could be seen as an attempt at extortion and a suggestion that he might deploy the Justice Department to launch an investigation, they said.

"The president is either knowingly attempting to coerce state officials into corrupting the integrity of the election or is so deluded that he believes what he's saying," said Richard Pildes, a constitutional law professor at New York University, who said Trump's actions may have violated several federal statutes.

But Pildes said Trump's clearer transgression is a moral one, and he emphasized that focusing on whether he committed a crime could deflect attention from the "simple, stark, horrific fact that we have a president trying to use the powers of his office to pressure state officials into committing election fraud to keep him in office."

Edward Foley, a law professor at Ohio State University, said the legal questions are murky, and that it could be difficult to prove that Trump knew he was encouraging illegal behavior. But Foley also emphasized that the call was "inappropriate and contemptible" and should prompt anger.

A Georgia state law makes it a felony to "solicit, request, command, importune or otherwise attempt to cause another person to engage in election fraud." By urging election officials to "find" votes that were not legally cast for him, Trump could be prosecuted under that law, said Ryan Locke, a criminal defense lawyer and former public defender in Atlanta.

"He's telling the secretary of state to 'find votes so that I can win -- votes that are not due to me,'" Locke said. "The recording alone is certainly enough to launch an investigation. It's likely probable cause to issue an indictment."

He said Trump could also be in violation of laws prohibiting extortion. But he and other legal experts said it was unlikely that prosecutors would pursue a case against Trump in the waning days of his administration.

He said the call was "more than a pathetic, rambling, delusional rant," calling the president "unhinged and dangerous," and saying that Trump's Republican allies "are putting the orderly and peaceful transition of power in our nation at risk."

Vice President-elect Kamala Harris -- at a drive-in rally for Georgia's Democratic Senate candidates in Garden City, Ga. -- referred to Trump's call as "the voice of desperation -- most certainly that."

"And it was a bald, baldfaced, bold abuse of power by the president of the United States," she added.

Throughout the call, Trump detailed an exhaustive list to support his position. He claimed that he had won Georgia by at least a half-million votes. He floated a barrage of assertions that have been investigated and disproved: that thousands of dead people voted; that an Atlanta election worker scanned 18,000 forged ballots three times each and "100 percent" were for Biden; that thousands more voters living out of state came back to Georgia illegally just to vote in the election.

Trump did most of the talking on the call. He called Raffensperger a "child" and said law enforcement officials were "either dishonest or incompetent" for not believing there was widespread ballot fraud in Atlanta.

The secretary of state repeatedly sought to correct Trump, saying at one point, "Mr. President, the problem you have with social media, they -- people can say anything."

Raffensperger responded: "Mr. President, they did not. We did an audit of that and we proved conclusively that they were not scanned three times."

When Trump claimed that more than 5,000 ballots were cast in Georgia in the name of dead people, Raffensperger responded: "The actual number was two. Two. Two people that were dead that voted."

Finally, after roughly an hour, Raffensperger put an end to the conversation: "Thank you, President Trump, for your time."

​​​​​Information for this article was contributed by Amy Gardner and Alice Crites of The Washington Post; by Laura King of the Los Angeles Times; and by Michael D. Shear and Stephanie Saul of The New York Times.