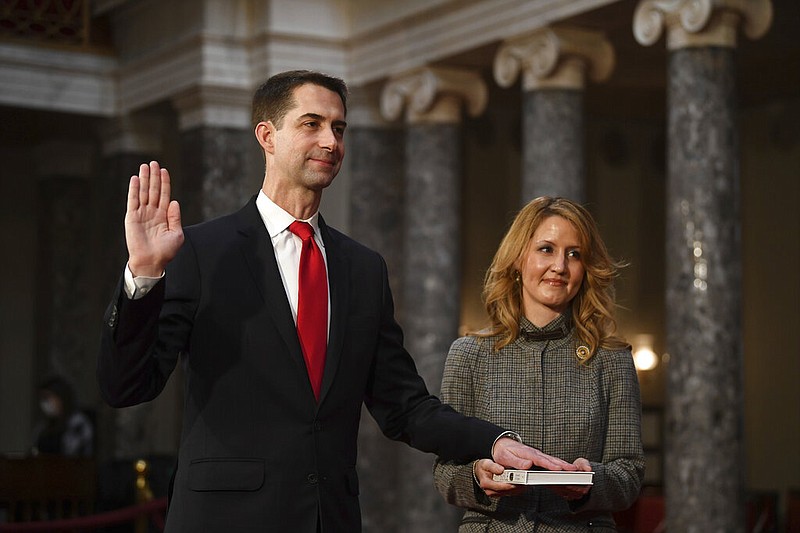 U.S. Sen. Tom Cotton, R-Ark., takes the oath of office as his wife, Anna Peckham, holds a Bible during a reenactment ceremony in the Old Senate Chamber at the Capitol in Washington on Sunday, Jan. 3, 2021. - Photo by Pool via AP / Kevin Dietsch

Capitol Hill lawmakers are tasked with counting the votes, not altering the results, the lawmaker from Little Rock said.

"If Congress purported to overturn the results of the Electoral College, it would not only exceed that power, but also establish unwise precedents. First, Congress would take away the power to choose the president from the people, which would essentially end presidential elections and place that power in the hands of whichever party controls Congress. Second, Congress would imperil the Electoral College, which gives small states like Arkansas a voice in presidential elections," he said.

Democrats have long sought to eliminate the Electoral College and to federalize election law, Cotton said, warning that a challenge to Joe Biden's election could ultimately advance both of these objectives.

Cotton said he shares "the concerns of many Arkansans about irregularities in the presidential election, especially in states that rushed through election-law changes to relax standards for voting-by-mail. I also share their disappointment with the election results," he said.

He called for the creation of a commission to study the Nov. 3 election and recommend reforms. The Senate should also hold hearings on the topic, he said, adding, "All Americans deserve to have confidence in the elections that undergird our free government."

The House and the Senate are scheduled to meet in joint session on Wednesday as Vice President Mike Pence opens the certified returns from all 50 states and the District of Columbia.

U.S. Sen. John Boozman, R-Ark., who was supportive of President Donald Trump's right to challenge the results in court, has said he will respect the decision of the Electoral College.

Many Americans are "concerned about the integrity of the election, so I think it was really important that the president use the ability to ask for recounts, which we've done, to go before the courts," Boozman said in a Dec. 18 interview.

Ultimately, it's the states that determine the outcome, the lawmaker from Rogers said.

"We don't want to federalize elections," he said. "States themselves certify [their own results]. They've done that. And then the Electoral College has met and they've voted. So at this point, it's a formality to go before the Senate and the House. So I will support the decision of the Electoral College."

If there was fraud, then it should be acknowledged and safeguards should be put in place to prevent it in the future, he added.

U.S. Sen. Josh Hawley, R-Mo., announced Wednesday that he would challenge the results. A group led by U.S. Sen. Ted Cruz, R-Texas, will also oppose the certification of the results, rejecting electoral votes from disputed states; an 1877 law provides a mechanism for challenging the returns that are not "regularly given" or "lawfully certified."

One member of the group, U.S. Sen. James Lankford, R-Okla., said it's appropriate for Republicans to raise their objections, noting that Democrats had raised objections to Electoral College returns in 1969, 2001, 2005 and 2017.

"Our democracy is strong enough to handle conversation on election integrity issues," he said Sunday.

If the challenge fails, Lankford said, he will "absolutely" accept the decision of the Electoral College.

"If it's unsuccessful, then we've elected a president. It's done. What happens on Jan. 6 solidifies everything that's done. There is no turning back at that point. That's solid. That's finished."

U.S. Sen. Susan Collins, R-Maine, made clear Sunday that she won't be challenging the outcome.

"The states have done their jobs. The voters have expressed their will. The courts have adjudicated the cases, and I don't see a basis for questioning the vote," she said.

"They can do whatever they want. On Jan. 20, Joe Biden will be president and Kamala Harris will be vice president, no matter what they try to do," he said.

"I think they're hurting themselves and hurting the democracy, all to try to please somebody who has no fidelity to elections or even the truth," Schumer said.

House members were also sworn in Sunday, including four from Arkansas; all are Republicans.

Two of them -- U.S. Rep. French Hill of Little Rock and U.S. Rep. Steve Womack of Rogers -- had previously indicated they would respect the Electoral College's decision.

U.S. Rep. Rick Crawford of Jonesboro said he planned to support a House challenge to the Electoral College returns, arguing that there was fraud and other election-related problems that needed to be addressed.

"This is not as much about Trump as it is about maintaining the integrity of this process," Crawford said.

Noting previous Democratic challenges to the electoral returns in 2001, 2005 and 2017, Crawford said there is ample precedent for the objections.

"There's nothing unconstitutional about this procedure. There's nothing that violates the rules of the House," he said. "This is all within the established rules, and there's no threat to the Republic or anything like that," he said.

"I'm getting a ton of input from constituents. I'm trying to look into as much of the facts and data as I can, so I'm not sure when I will know exactly what I'm going to do," he said.