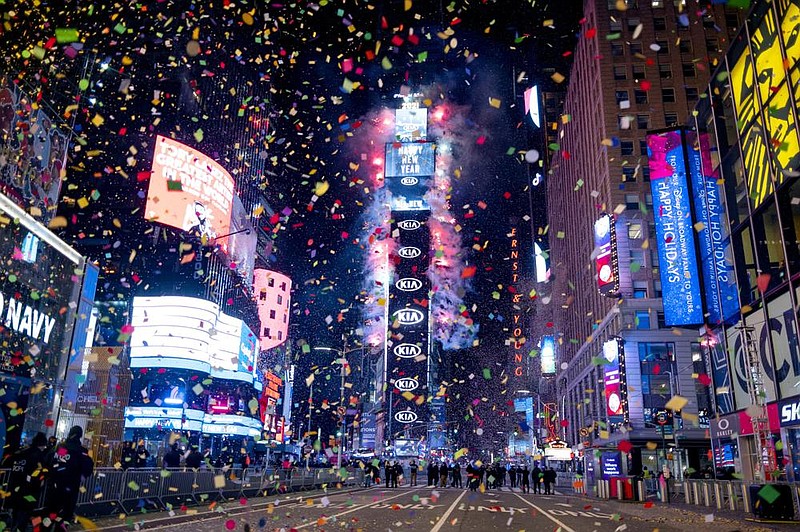 Confetti flies in a mostly empty Times Square in New York City early today as the crystal ball drops signifying the dawn of 2021. The square, normally packed with revelers, was closed this year because of the coronavirus pandemic. More photos at arkansasonline.com/11nye20/. (AP/Craig Ruttle)

The world's New Year's Eve celebrations Thursday were like no other in modern times.

From the South Pacific to New York City, pandemic restrictions on open-air gatherings had people turning to made-for-TV fireworks displays or wrapping up early since they could not toast the end of 2020 in the presence of friends or jovial strangers.

As midnight rolled from Asia to the Middle East, Europe, Africa and the Americas, the New Year's experience mirrored national responses to the coronavirus itself. Some countries and cities canceled or scaled back festivities, while others with fewer active outbreaks carried on like any other year.

Australia was among the first to ring in 2021. In past years, 1 million people crowded Sydney's harbor to watch fireworks. This year, most people watched on television as authorities urged residents to stay home. Still, 7 minutes of pyrotechnics lit up the Sydney Harbor Bridge and its surroundings.

Melbourne, Australia's second-most-populated city, called off its annual fireworks display to discourage crowds. Officials in London made the same decision. And while the ball was set to drop in New York's Times Square as it has for decades, police fenced off the site that's become synonymous with New Year's Eve.

Another of the world's most popular places to be on Dec. 31, Dubai in the United Arab Emirates, pressed ahead with its revelry despite a surge of infections. Images of masked health care workers briefly lit up Burj Khalifa, the world's tallest tower, before fireworks exploded over the building. Tens of thousands of people flooded the streets, and squares marked out for social distancing were largely ignored.

Still, the pandemic robbed the night of its freewheeling spirit. Authorities implemented a raft of virus-control measures to limit rowdy crowds in downtown Dubai. At luxury bars and restaurants, music blared and people drank, but dancing was strictly prohibited.

For some, the restrictions spoiled the fun.

"People come to Dubai because it's open, but there are so many rules," said Bashir Shehu, 50, who was visiting from Nigeria with his family. "We pray that next year we can celebrate with some real freedom."

Many South Africans swapped firecrackers for candles to mark New Year's Eve amid covid-19 restrictions that included a nighttime curfew.

[Video not showing up above? Click here to watch » https://www.youtube.com/watch?v=6_3-RUdzyp4]

Instead of ushering in 2021 at packed events with dance music and fireworks, many South Africans heeded President Cyril Ramaphosa's call to honor those who have died in the pandemic and the health workers who are on the front lines battling the disease.

South Africa's current resurgence of coronavirus cases is fueled by a new, more infectious variant. The country announced a new high of 17,710 new cases and 465 deaths in the past 24 hours, bringing the total cumulative number of cases to more than 1,039,000, including 28,033 deaths.

With hospitals reaching capacity, the government this week reintroduced strict measures, including bans on the sale of alcohol and public gatherings.

Urging all South Africans to battle the virus, Ramaphosa called on the nation to celebrate New Year's Eve in a different way.

"Let us each light a candle in memory of those who have lost their lives, in tribute to those on the front line who are working tirelessly to protect us from harm, in appreciation of the great sacrifices that have been made this past year, and in the confidence that the year ahead will bring health, peace and hope to our people," an emotional Ramaphosa said in a televised address to the nation that he called a "family chat."

The president said he would light a candle in Cape Town at midnight on New Year's Eve.

In many European countries, authorities warned that they were ready to clamp down on revelers breaching public health rules, including nightly curfews in France, Italy, Turkey, Latvia, the Czech Republic and Greece.

"No one will be on the streets after 10 p.m. [Athens] will be a dead city to make sure no more restrictions are imposed," said Greece's public order minister Michalis Chrisohoidis.

In Spain, a few families gathered in Madrid's sunny central Puerta de Sol square to listen to the rehearsal of the traditional ringing of the bells that is held at midnight. They followed the Spanish custom of eating 12 grapes with each stroke of the bells before police cleared the area that normally hosts thousands of revelers.

Elsewhere in the world, as the clock struck midnight, fireworks burst over Moscow's Red Square and the Acropolis in Athens, but the explosions echoed across largely empty streets as people obeyed orders to stay home.

From Berlin to Brussels, normally raucous celebrations were muted by the pandemic.

Even the British government, keen to celebrate the U.K.'s definitive split from the European Union, ran ads imploring the public to "see in the New Year safely at home" amid a record number of newly confirmed cases.

In Scotland, which prides itself on Dec. 31 Hogmanay celebrations, the government detailed what it expected not to see.

"No gatherings, no house parties, no first-footing. Instead, we should bring in 2021 in our own homes with just our own households," Scotland's First Minister Nicola Sturgeon said.

Many around the world looked toward 2021 with hope, partly because of the arrival of vaccines that offer a chance of beating the pandemic.

While there weren't crowds in Times Square, the mayor pledged that the city, which has recorded more than 25,000 deaths from the virus, would rebound in the new year.

Citing concerns over the spread of covid-19, police closed West 42nd Street to West 47th Street -- sometimes called "the Crossroads of the World" -- to vehicles and pedestrians, and dispersed onlookers venturing into a "frozen zone" -- the blocks surrounding the Times Square ball that historically draw shoulder-to-shoulder crowds.

The result, in the waning hours of 2020, was a Times Square that felt eerily empty. Police Commissioner Dermot Shea described the scene as "surreal."

"It makes me a little bit sad," said Cole Zieser, who recently moved to New York City. "It's just not going to be what we wanted, what everyone dreams about in New York."

"If you think you're going to be able to stand there and watch the ball, you're mistaken," Chief of Department Terence Monahan said, referring to the glittering, crystal ball that descends down a flagpole in Times Square each New Year's Eve to mark the stroke of midnight.

"I cannot wait to get started" turning the page on a year when New York became an epicenter of the pandemic in spring, de Blasio said. The city has counted more than 25,000 deaths blamed on the virus.

Juanita Holmes, chief of patrol for the New York Police Department, urged would-be partygoers to ring in 2021 "from the comfort of your home."

"Coming to Times Square is a family tradition for some. It is a bucket list item for others. But this year is different," she said. "I can't emphasize enough how important it is for everyone to stay home."

The Police Department rolled out heavy-weapons teams, explosive-sniffing dogs, drones and sand trucks. But it planned a drastically scaled-back presence in Times Square, including an 80% reduction in its typical workforce assigned to the area.

"We always have to prepare for the worst in terms of counterterrorism overlays," Shea said, "but the crowds will not be like they were in other years."

More than 1.8 million deaths worldwide have been linked to the coronavirus since the start of the pandemic.

Some world leaders, such as German Chancellor Angela Merkel, used their New Year's addresses to thank citizens for enduring hardship during the lockdown and to criticize those who defied the rules. Others, like Italy's President Sergio Mattarella, flew the flag for science, urging citizens to discard their fears about getting immunized against covid-19.

"Faced with an illness so highly contagious, which causes so many deaths, it's necessary to protect one's own health and it's dutiful to protect those of the others -- family members, friends, colleagues," said Mattarella, 79.

In Brazil's Rio de Janeiro, where official fireworks and celebrations also were canceled to limit the spread of the virus, police officers braced for what promised to be a long night.

Rio officials decided to seal off Copacabana, where millions of people dressed in white usually gather on the beach to marvel at fireworks and attend large concerts. This year, between 8 p.m. New Year's Eve and 6 a.m. New Year's Day, only local residents would be able to access the city's iconic shore, authorities said.

In South Korea, Seoul's city government canceled its annual New Year's Eve bell-ringing ceremony in the Jongno neighborhood for the first time since the event was first held in 1953, months after the end of the Korean War.

New Zealand, which is two hours ahead of Sydney, and several of its South Pacific island neighbors that all have no active covid-19 cases held their usual New Year's activities.

In Chinese societies, the virus ensured more muted celebrations of the solar New Year, which is less widely observed than the Lunar New Year that in 2021 will fall in February.

Information for this article was contributed by Robert Bumsted, Jim Mustian, Jennifer Peltz, Tom Hays and Mogomotsi Magome of The Associated Press. 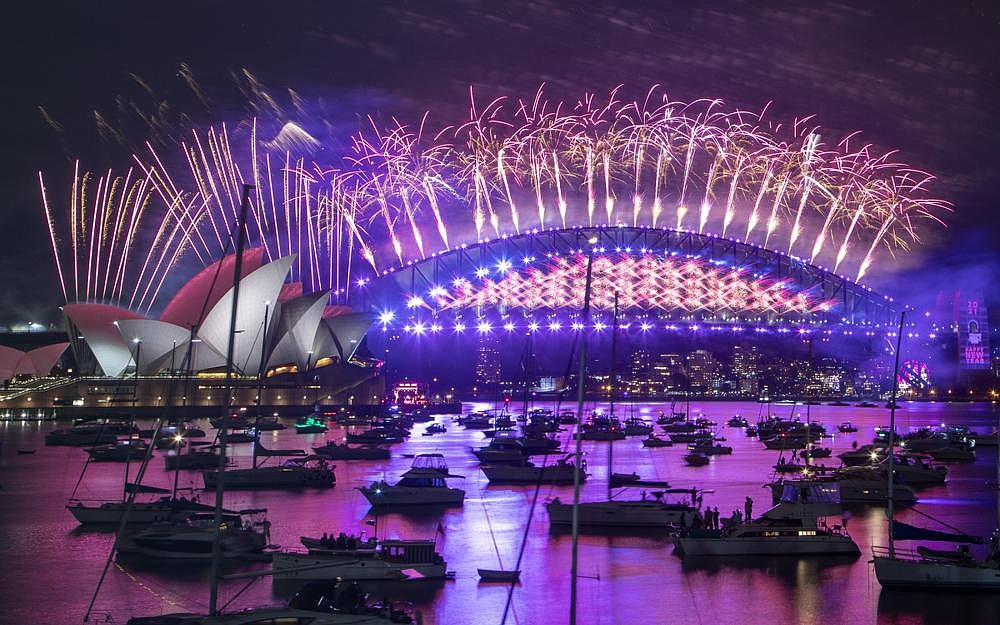 Fireworks explode over the Sydney Opera House and Harbour Bridge in celebration of the new year Thursday in Sydney, Australia. (AP/Mark Baker) 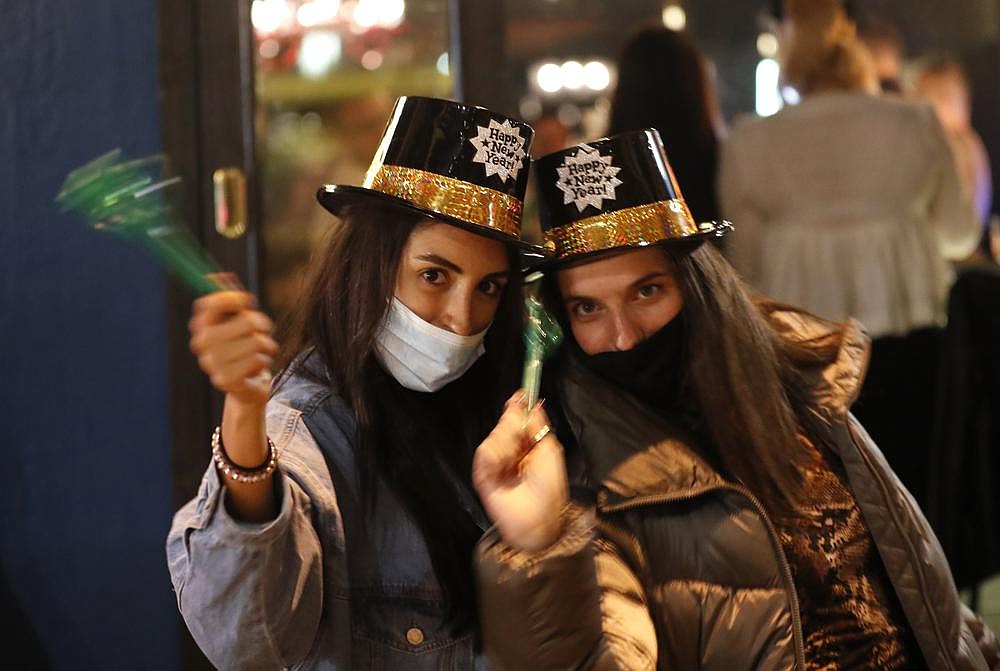 Lebanese women, wearing masks to help prevent spread of the coronavirus, celebrate the New Year outside a pub Thursday in Beirut. (AP/Hussein Malla) 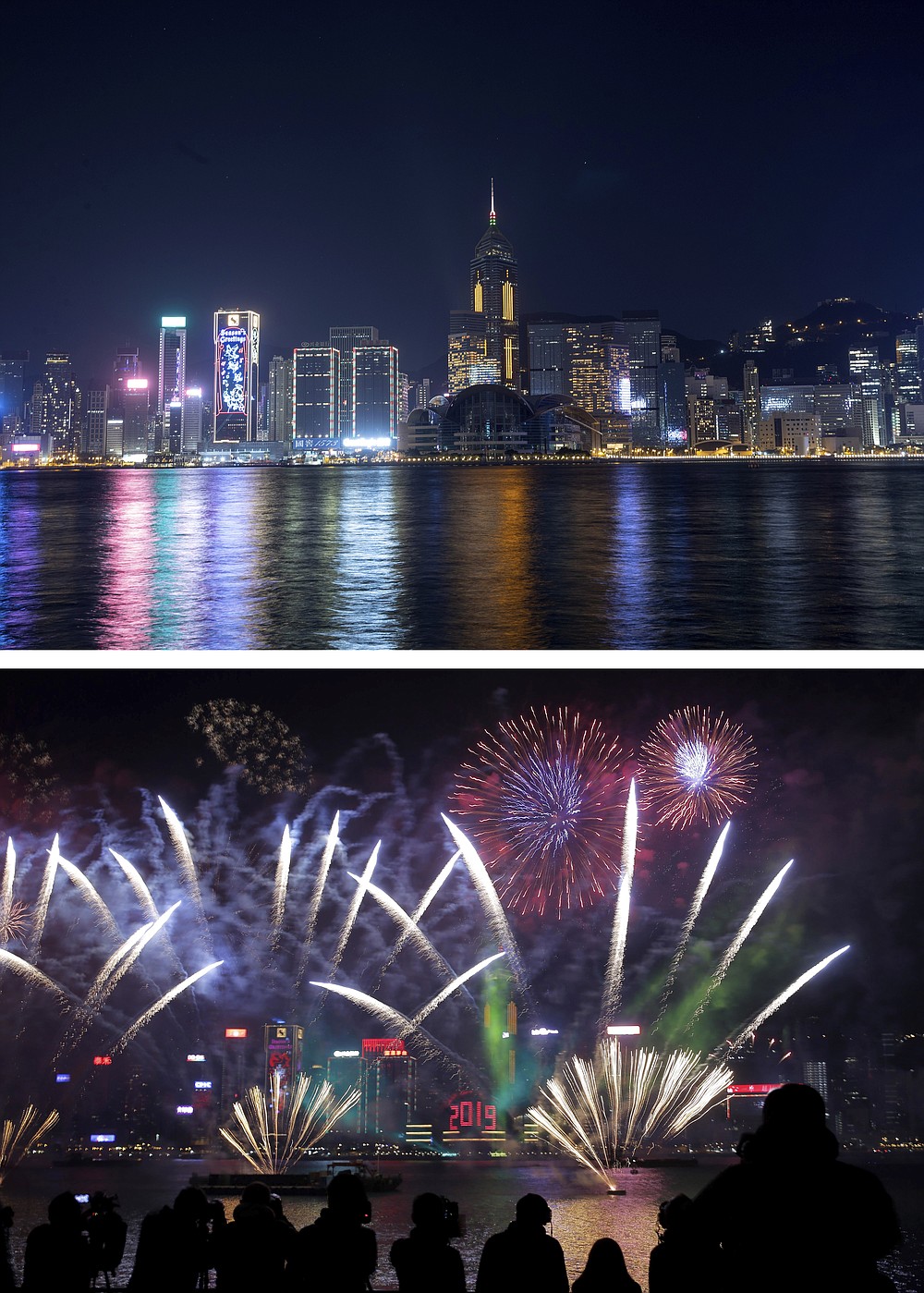 A combo image showing a general view of the Victoria Harbor at the New Year's Eve of year 2021 in Hong Kong, the top photo taken on Thursday, Dec. 31, 2020, and the bottom one on Tuesday, Jan. 1, 2019, fireworks explode over the Victoria Harbor during New Year's Eve to celebrate the start of year 2019 in Hong Kong. As the world says goodbye to 2020, there will be countdowns and live performances, but no massed jubilant crowds in traditional gathering spots like the Champs Elysees in Paris and New York City's Times Square this New Year's Eve. The virus that ruined 2020 has led to cancelations of most fireworks displays and public events in favor of made-for-TV-only moments in party spots like London and Rio de Janeiro. (AP Photo/Kin Cheung) 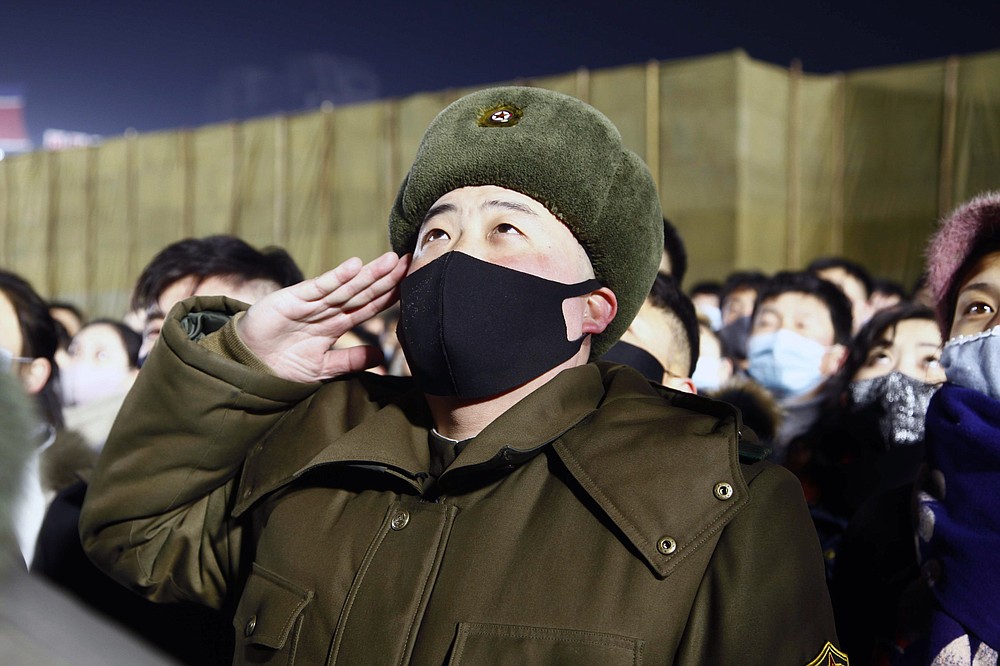 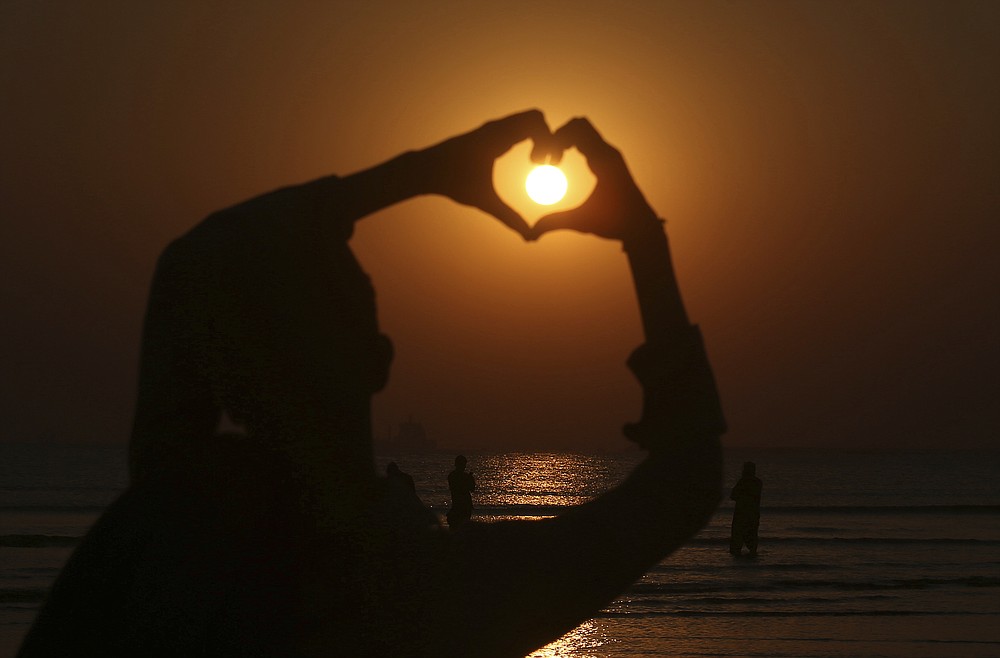 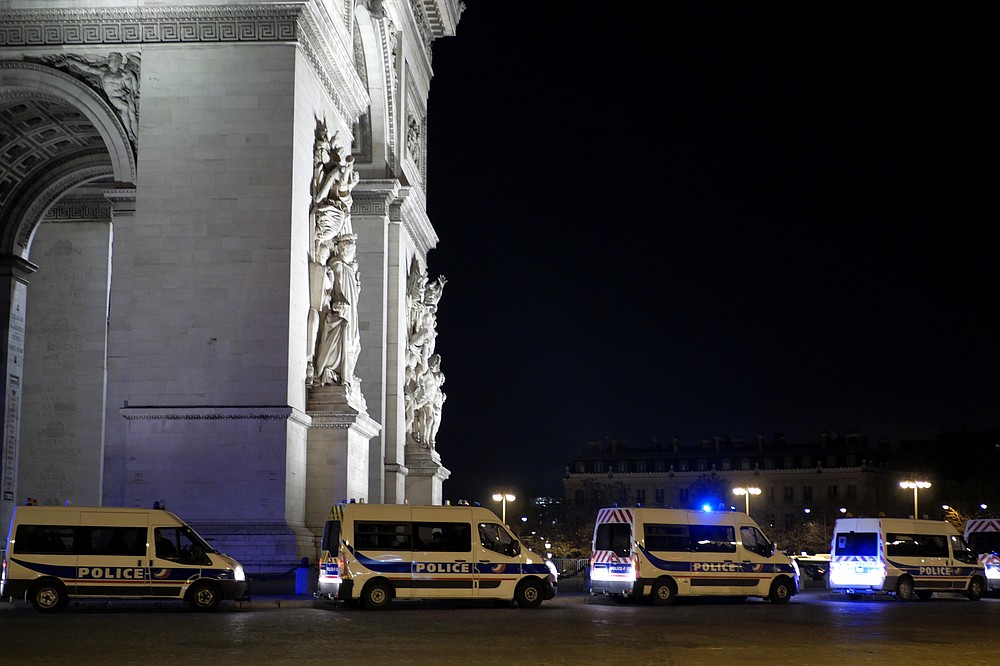 Police vans are parked near the Arc of Triomphe, ahead of the New Year's Eve, in Paris, Thursday, Dec. 31, 2020. As the world says goodbye to 2020, there will be countdowns and live performances, but no massed jubilant crowds in traditional gathering spots like the Champs Elysees in Paris and New York City's Times Square this New Year's Eve. (AP Photo/Thibault Camus) 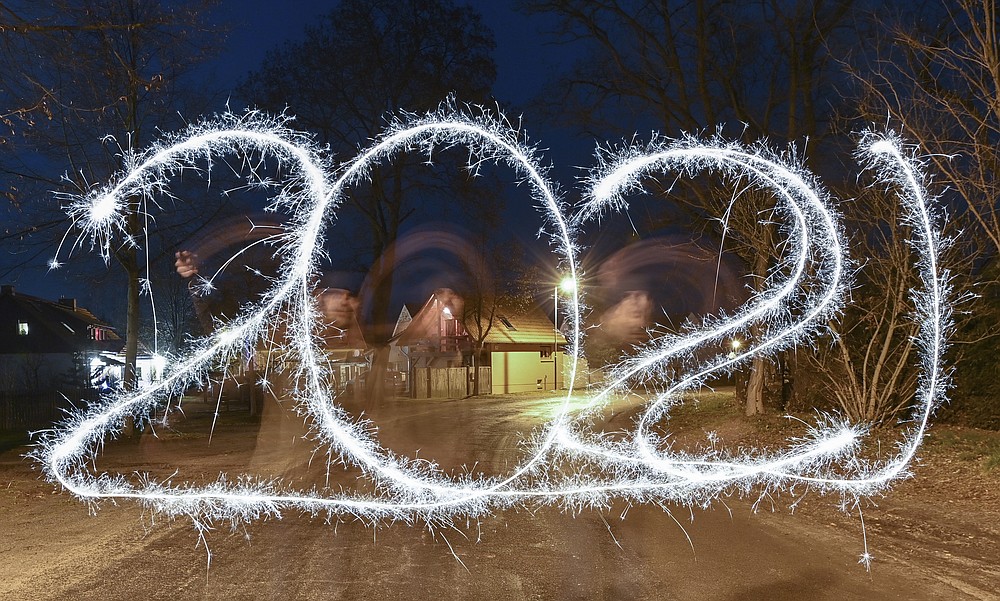 In this long time exposure image, a person appears blurred as he paints 2021 with a sparkler firework to represent the coming year, in the darkness on New Year's Eve, in Briesen, Germany, late Thursday Dec. 31, 2020. (Patrick Pleul/dpa via AP) 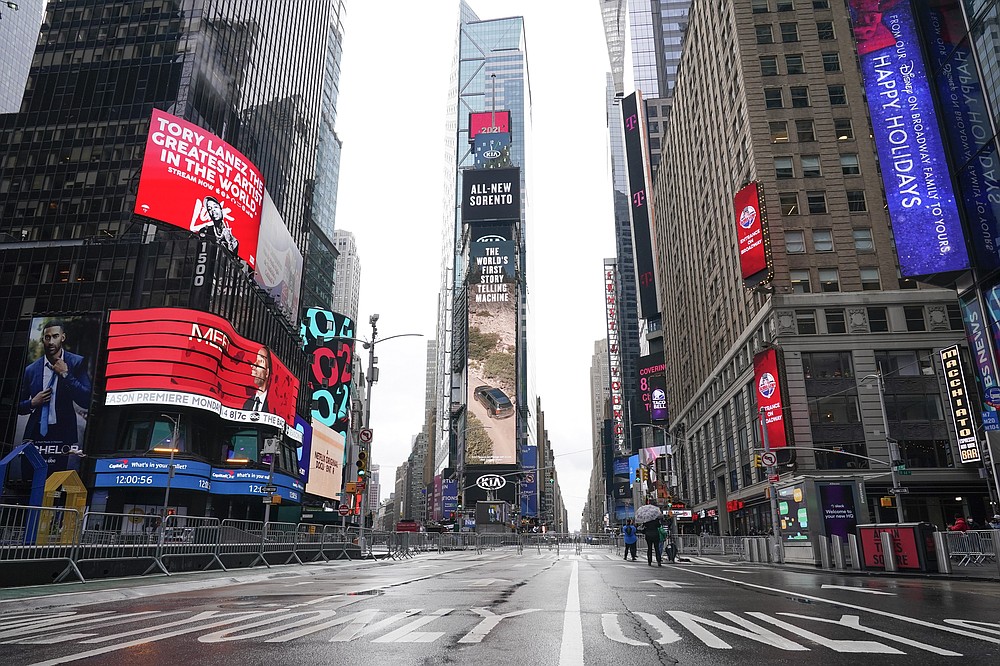 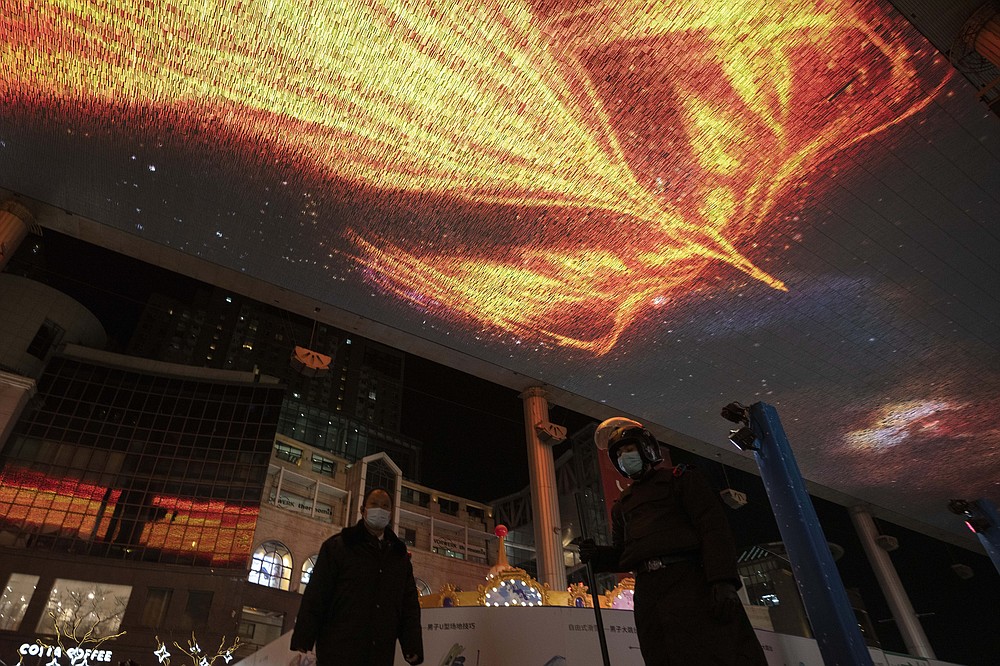 A security guard stands on duty as a phoenix is shown on a giant screen on New Year Eve in Beijing Thursday, Dec. 31, 2020. This New Year's Eve is being celebrated like no other, with pandemic restrictions limiting crowds and many people bidding farewell to a year they'd prefer to forget. (AP Photo/Ng Han Guan) 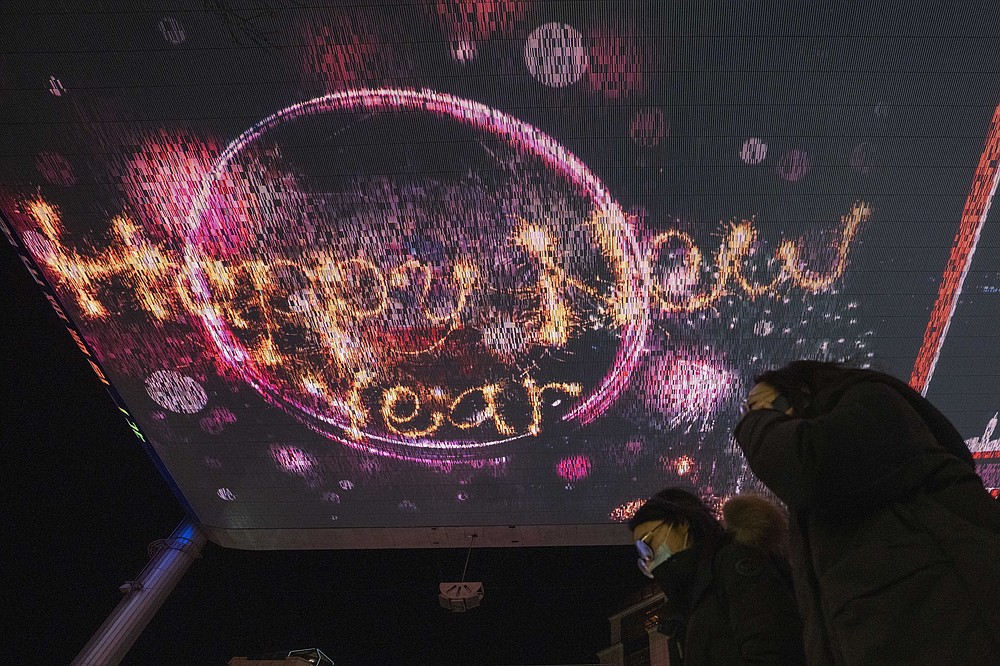 Visitors to a mall passes by Happy New Year greetings shown on a giant screen in Beijing Thursday, Dec. 31, 2020. This New Year's Eve is being celebrated like no other, with pandemic restrictions limiting crowds and many people bidding farewell to a year they'd prefer to forget. (AP Photo/Ng Han Guan)