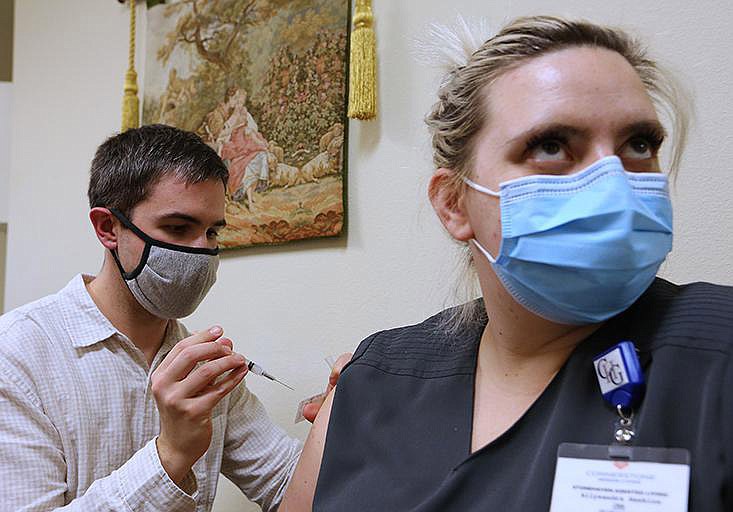 Almost two weeks after Arkansas started to receive its first 68,800 doses of the Moderna coronavirus vaccine, only about 10% of the roughly 50,000 residents and employees in some 300 long-term-care facilities had been vaccinated as of Thursday morning, according to the Arkansas Department of Health.

Gov. Asa Hutchinson said earlier this week that he was "not satisfied" with the slow pace of the vaccine rollout to such facilities, like nursing homes and assisted living facilities, which have been the epicenter of tens of thousands of fatal cases of the coronavirus across the United States.

In Arkansas alone, nearly half of the covid-19 deaths have been residents and employees of such facilities, according to data from the state Department of Health.

Vaccinations in those facilities are being handled by pharmacies -- two major chains, plus locally owned businesses.

As of Thursday morning, Walgreens and CVS administered 178 vaccines, while independent pharmacies administered 4,539, according to the Health Department.

"I am asking our large retail pharmacies and all of our pharmacies to really understand what's at stake here to help us get the vaccine administered as quickly as possible because lives are at stake," Hutchinson said Tuesday at his weekly news conference on the pandemic. "It is critical we accelerate the deployment of this vaccine."

Hutchinson said he "hopes and expects" all long-term-care residents and staff members to be vaccinated by the end of January.

Long-term-care facilities are presenting new challenges for the state's vaccination blueprint, which places residents and employees of such facilities as a top priority behind front-line workers in hospitals who began receiving the Pfizer vaccine in mid-December.

The Moderna vaccine has been designated almost exclusively for long-term-care facilities.

Long-term-care facilities had the option of partnering with the national pharmacy chains CVS and Walgreens, which inked deals with the U.S. Centers for Disease Control and Prevention, to offer on-site vaccination services to nursing homes and other assisted living facilities.

CVS is administering vaccines to 40,000 long-term-care facilities nationwide, according to the company.

More than 35,000 facilities across the country selected Walgreens, that chain said.

About half of the state's long-term-care facilities partnered with CVS or Walgreens, according to the Arkansas Pharmacists Association, a statewide professional organization that is assisting with the effort.

Facilities also had the option of partnering with Arkansas-based pharmacies, some of which have retail locations and others that work almost exclusively with long-term-care operations.

Walgreens began vaccinations in Arkansas this week, according to Kelli Teno, spokeswoman for the company. The pharmacy chain would not release details on where it had given vaccinations nor how many doses it had administered.

Vaccinations began Monday and should be completed in 12 weeks, Major said. CVS would not identify the facilities.

"Our effort to administer a covid-19 vaccine to Arkansas' long-term-care community has been going according to plan, and in close coordination with the state," Major said in an email.

Walgreens and CVS did not respond to requests from the Arkansas Democrat-Gazette for further comment on whether they plan to speed up vaccinations or whether they are facing any challenges or other delays.

The state Health Department does not know how many doses of the Moderna vaccine those pharmacies received because shipping and delivery "is handled on the federal side," Gavin Lesnick, a department spokesman, said via email.

Walgreens and CVS were allotted more than half of the state's vaccine ration, Lesnick said.

Rachel Bunch, executive director of the Arkansas Healthcare Association, the state's largest organization of licensed long-term-care centers, said she has not received information from Walgreens or CVS on how many vaccination clinics the pharmacies have organized so far.

The Arkansas Healthcare Association is working with the Health Department and the Arkansas Pharmacists Association to coordinate vaccine distribution.

"I have been trying to get some updates on that," Bunch said. "I don't know how many clinics they have done."

There are concerns that because of the volume of vaccinations the two chains are administering, the nursing homes that partnered with them may experience delays.

"Just by the sheer number of homes they have to provide services to, it will take a while for them to get into every one of those homes and vaccinate all of those residents and staff," said John Vinson, chief executive officer of the Arkansas Pharmacists Association.

"The homes will eventually get the vaccine, but it may take a little longer and not be as timely as those who selected local pharmacies that they are used to working with," Vinson said.

"Whenever you are working with 70 homes as opposed to two or three homes, the logistics are more challenging," he said. "If a facility has selected a partner that is not local, it will take longer to get the vaccine delivered and get a team of individuals to that nursing home to administer that vaccine."

There are about 30 pharmacies working to administer vaccines to thousands of residents and staff members across the state, Vinson said.

Some pharmacies, like City Pharmacy in Little Rock, have only a handful of employees, who have been working extended hours to coordinate with the facilities, distribute information about the vaccines, file required paperwork and train employees.

"This is a huge, monumental task," said Dr. Andy Hart, owner of City Pharmacy. "The logistics have been a real nightmare."

"It is like a flu [shot] clinic on steroids," Hart said.

The pharmacies are not only responsible for coordinating on-site vaccine clinics but also must collect consent forms from employees and residents, usually ahead of time, to make sure the pharmacies know the number of doses to allocate for a particular location. That is also essential to try to prevent wasted doses.

Obtaining consent has been cumbersome.

Many residents in long-term-care facilities have illnesses, like dementia, which means another family member or legal guardian must be contacted to sign off on receiving the injections. Sometimes the guardians live out of state or are otherwise hard to reach, causing further delays.

"Sometimes it takes more than one phone call and attempt to reach them [a guardian] and explain or answer questions to get consent," Bunch said. "That process takes time."

Some workers have also been reticent, Vinson said, adding that a handful of long-term-care homes are now requiring employees to get vaccinated.

"Especially in certain parts of our state, there is a lot of reluctance," Vinson said. "There is vaccine hesitancy, and not 100% of the residents or the staff will accept the vaccine. That will take some education."

It might also take multiple pharmacy visits to one facility to continue to vaccinate employees and residents as more people want the shots.

Already pharmacies are struggling to schedule on-site clinics as soon as possible, with some long-term-care facilities reporting their first inoculation dates set in February or even March.

"Some facilities have even received multiple clinic dates," Bunch said. "Some of them initially were scheduled really far out."

"We have been working to clean that up," she said.

This has resulted in some residential facilities opting to change to different pharmacies that can schedule clinics sooner. Often that means the consent process will have to start again as the new pharmacy will have to collect new consent forms, Bunch said.

"There is just so much," she said. "The whole situation is incredibly complex, and there are lots of moving parts."

Some long-term-care facilities have "fallen through the cracks" or did not enroll at all, Bunch said.

"We had some facilities that thought they had signed up with a particular partner or filled out the enrollment information online but have not been contacted by a pharmacy," she said. "We have been working hard to get those added to the list."

Long-term-care facilities also have high turnover of staff members and residents, which makes planning more difficult. They also have peripheral providers, like physical therapists or dentists, who work with residents at multiple facilities, adding even more complexity.

Vinson, of the Arkansas Pharmacists Association, said the number of residents vaccinated is likely higher than state data indicate because of a backlog of overwhelmed pharmacies still logging numbers with the state's reporting system.

He also said some pharmacies did not receive their first shipments of the Moderna vaccine until Monday of this week.

"The data versus what has happened in the field may not be the same," Vinson said.

"We are willing to work to find whatever solutions are necessary to save lives," he said. "We are doing the best we can to react and to solve challenges when the challenges arise."