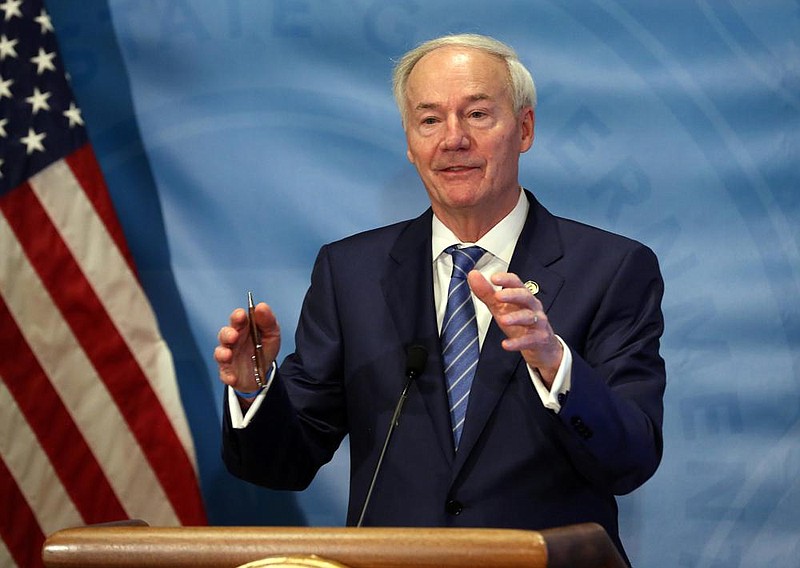 Gov. Asa Hutchinson answers a question during the weekly Covid-19 briefing on Tuesday, Feb. 9, 2021, at the state Capitol in Little Rock.

The Republican governor also discussed Arkansas State Sen. Jim Hendren's decision to leave the Republican Party; the Sulphur Springs lawmaker, who announced last week that he would become an independent, is Hutchinson's nephew.

Appearing on CNN's "State of the Union," the governor said federal-state covid cooperation hadn't been hampered by the change in administrations.

"It's been a seamless hand-off. They've taken the ball. They've been able, because of increased production, to increase the manufacturing and the allocation to the states on our doses," he said.

Hutchinson did express concerns about parallel federal vaccination efforts that the administration is launching.

As vice chairman of the National Governors Association, he signed a bipartisan letter to Biden on Feb. 15 highlighting three vaccination distribution channels that are "federally administered and beyond the states' control."

In one, the federal government selects private pharmacies to administer vaccinations in nursing homes and long term care facilities.

A second program, launched by the Biden administration, will distribute vaccine doses directly to private pharmacies for distribution in "socially vulnerable communities," among others.

The administration also plans to begin distributing vaccinations at federally qualified health centers of its choosing.

On CNN, Hutchinson emphasized the importance of state leadership on the effort.

"Governors want to be held accountable and we want to be responsible for getting these vaccines out, but we're setting up multiple programs right now. We're setting up the state program and then there's some federal programs that are going side by side with that," he said.

"We were sending the signal that, as you have increased allocation, give it to the states. We'll get it out. We'll get it in the arms of people. We have the same commitment and it's easier to coordinate that way," he said.

"We have a very good working relationship with the White House. I expect us to work through these issues and we're going to continue to increase getting those doses out," he said.

The governor repeated his calls for federal covid-19-related economic assistance, but portrayed the Biden plan as excessive.

"I think that everybody recognizes the urgent need for a stimulus package for relief to the states. That's what the governors support. But it's a fair debate as to what's included in that bill and how much debt we're going to put on our children for the future. And it's a very expensive bill at $1.9 trillion," he said.

"I would've preferred it to be done in a bipartisan way, and I think it could be trimmed back," he said.

Hutchinson was also asked about Hendren's exit from the Republican Party.

In a video last week announcing his decision, Hendren accused former President Donald Trump of attempting to "overturn the results of a fair and free election," saying Trump and some of his allies had used "lies, false statements and conspiracy theories" in an attempt to "subvert the Constitution."

In an excerpt aired by CNN, Hendren said, "I'm still a conservative. But I'm one whose values about decency, civility and compassion, I just don't see in my party anymore. I haven't changed; my party has."

Asked to react to Hendren's message, Hutchinson said, "It saddens me, and it's certainly a warning sign to us that there's many out there that would like to see a more civil dialogue."

Hutchinson, who said he would oppose a Trump 2024 presidential bid, maintained Republicans can embrace civil discourse as well as conservative principles.

"We're trying to accomplish the same thing in a more civil dialogue, being able to reach across the aisle to be able to work with each other," he said. "That's what I really think the American public wants."

While Hendren may be leaving, Hutchinson portrayed his commitment to the party as firm.

"I fought for 40 years for a conservative Republican Party," he said. "Sure we have personalities that come and go. But we stick to our principles. That's a good future."

Afterward, Hendren said he and the governor are pursuing the same goal "with different methods."

"I respect those, like him, who are staying in the party and are going to try to return it to a party of principles," he said. "I just felt that...I could have a greater impact outside the party than remaining."

"There's a lot of areas that conservative Democrats and Republicans can agree on. We need to see more of that instead of continuing to be a party that castigates the opposition and name-calls and demonizes," he said.

Since Thursday's announcement, Hendren said he's received plenty of feedback, including a lot on social media.

"I was expecting a pretty harsh response, but surprisingly, it's been overwhelmingly positive. It's just been really amazing to see how many people share the sentiment that they don't have a political home right now," he said.

"Republicans, moderate Democrats, I've gotten emails from all over the country and literally thousands from people in Arkansas saying that they appreciate my decision," Hendren said.

"He has a loud megaphone, but we have to have many different voices," Hutchinson said. "In my view, we can't let him define us for the future because that would just further divide our country and it would hurt our Republican Party."

Hendren Sunday expressed doubts that Trump's hold on the party can be broken any time soon.

Hendren said his focus, for now, is on Common Ground Arkansas, a group he announced last week that aims "to support leaders who put good ideas and the good of Arkansans ahead of partisanship."

Although he had been weighing a run for governor, "I put that on the back burner for a little while because it's not quite as time-sensitive," Hendren told the Democrat-Gazette Sunday.

"I've made it clear I won't be running in a Republican primary," he said. "So if I run, it will be as an independent, but I'm a long way from making that decision."

Information for this report was provided by Michael R. Wickline of the Arkansas Democrat-Gazette.