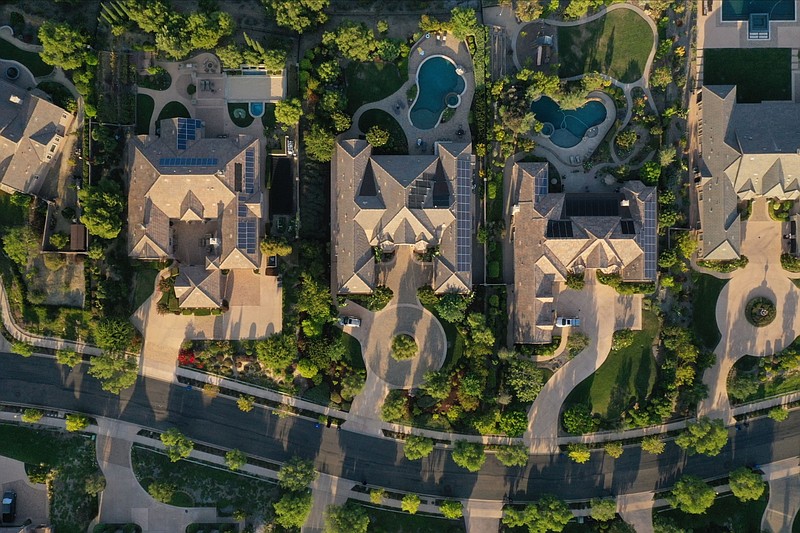 Single-family homes with rooftop solar panels and backyard pools are seen in this aerial photograph taken over a Lennar Corp. development in San Diego on Sept. 1, 2020. MUST CREDIT: Bloomberg photo by Bing Guan.

Sales of previously owned U.S. homes unexpectedly rose to a three-month high in January as Americans sought to take advantage of ultra-low mortgage rates that have powered the boom in housing.

Contract closings increased 0.6% from the previous month to an annualized 6.69 million, after a downwardly revised 6.65 million in December, the National Association of Realtors said Friday. Sales jumped 23.7% from a year earlier. It was the strongest sales pace since October and the second-highest since 2006.

Low borrowing costs paired with a desire for single-family homes with more space during the pandemic has propelled demand, even as other parts of the economy lag. Sales of existing homes last year were the strongest since 2006 at the height of the housing boom. Still, prices are rising, inventory is limited and expectations of higher mortgage rates may weigh on buyer demand going forward.

"We have to get more inventory," Lawrence Yun, the association's chief economist, said on a call with reporters. "Sales could be even higher" if more homes were put on the market, he said.

Sales of previously owned one-family homes rose 0.2%, while purchases of condominiums climbed 4.1% from a month earlier. Purchases of all existing homes increased in the South and Midwest. They fell in the West and Northeast.

Existing-home sales account for about 90% of U.S. housing and are calculated when a contract closes. New-home sales, which make up the remainder, are based on contract signings and will be released Wednesday.

While low mortgage rates have helped make buying a home more affordable, prices are soaring. The median selling price increased 14.1% from a year earlier to $303,900 in January, a record for the month.

There were a record-low 1.04 million homes for sale last month, down 1.9% from December and 26% from January 2020. At the current pace, it would take 1.9 months to sell all the homes on the market, down from 3.1 months in January of last year. Realtors see anything below five months of supply as a sign of a tight market.

"The days on the market continue to be very swift," Yun said. "No winter slowdown."

Recent data also suggest the housing market will remain a bright spot for months to come. While home construction declined in January for the first time in five months, permits to build single-family houses rose at the fastest pace since 2006. The number of one-family dwellings authorized but not yet started increased to the highest in more than 13 years.

The housing market has mounted a strong comeback since last summer after declining sharply in the spring when the coronavirus outbreak hit.

"It's not just a sellers' market, it's a super sellers' market," said Odeta Kushi, deputy chief economist at First American. "This is an incredibly competitive home-buying environment."

If the economy improves as coronavirus vaccines become more widely available, economists predict the housing market will continue to ride a strong wave of demand this year, even though mortgage rates are expected rise slightly from record lows.

The average rate on the benchmark 30-year fixed-rate home loan rose to 2.81% this week from last week's 2.73%, according to mortgage buyer Freddie Mac. One year ago, the rate was 3.49%.

The 10-year Treasury yield, which can influence interest rates on mortgages, made a sharp move higher this week as Wall Street factors in the possibility of higher inflation amid expectations the economy will regain its footing by the second half of this year.

Information for this article was contributed by Reade Pickert of Bloomberg News (WPNS) and by Alex Veiga of The Associated Press.