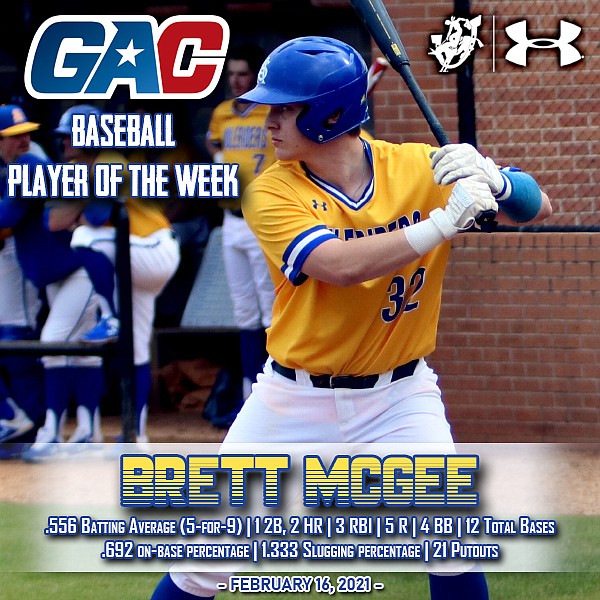 Justin Pettigrew’s squad jumped six spots from its national preseason ranking of No. 16 to land at No. 10 nationally; the third-consecutive season that the Muleriders will spend time in the outlet’s top 10.

The Muleriders are coming off a 2-1 showing during the opening weekend of play as the squad battled the chilling elements to come away with wins over Henderson State and Ouachita. SAU’s performance through three games pushed the team to the No. 2 ranking in the Central Region behind Central Missouri; the region’s top ranked team and nation’s No. 3.

Through three games, Southern Arkansas has plated 26 runs on 31 hits, 11 of which have went for extra bases, and has produced a team slugging percentage of .543. As a team, the Muleriders own a team ERA of 1.54 with 20 strikeouts.

In related news, the Great American Conference honored Mulerider Brett McGee as the league’s co-player of the week with Arkansas Tech’s Jonathon Arrieta. It is the second weekly honor awarded to the sophomore catcher in his career.

A native of Pittsburg, Texas, McGee swung a hot bat during the Muleriders’ cold opening weekend of play in Arkadelphia. He hit .556 (5-for-9) with a double and two home runs. He walked four times and totaled 12 bases, while accounting for five runs scored and three RBI as SAU went 2-1 with wins over Henderson State and Ouachita.

Additionally, he recorded 21 putouts defensively and aided a pitching staff that put together a sub-3.00 ERA for the weekend, while scattering 16 hits in 23.1 innings pitched.

On Thursday, the GAC approved changes to the league’s conference baseball schedule.

In lieu of the weather across Arkansas and Oklahoma, all six of this weekend’s slated conference baseball series, including SAU at NW Oklahoma will be moved to Friday, May 7 and Saturday, May 8. The original locations remain the same. As a result of this scheduling change, the GAC also moved its championship dates to Friday, May 14 through Sunday, May 16.

“I appreciate the flexibility shown by our leadership councils to help our baseball student-athletes,” GAC Commissioner Will Prewitt said. “The shifting of this weekend’s games to May should allow for more optimal playing conditions. Changing the tournament date allows our postseason qualifiers a better chance to compete as it removes a long layoff created by the recent Division II baseball format change that delayed selections until May 23.”

In cross country news, a Mulerider was among the GAC runners of the week honorees.

Rob Kraus won the honor for the first time in his collegiate career following his performance at the Bob Gravett Invitational where he finished second overall as the Muleriders claimed the team prize, their first win since the 2018 Lois Davis Invitational.

Kraus shaved off 90 seconds from his time at the season opener at the Lois Davis Invitational.

The Muleriders finish off their condensed spring season this weekend at the GAC Championships in Weatherford, Okla.

In softball the Lady Muleriders remained on top of the NFCA Division II Poll. This is the fourth consecutive poll that the they are the top-ranked team, having started the streak in March of last year when they finished on top of the final two polls.

The Lady Muleriders opened their season with a pair of emphatic wins over Delta State, scoring 29 runs over the two games, while only allowing five runs. The offensive effort saw Sarah Evans named GAC Player of the Week for the first time in her career.

The Lady Muleriders received 399 of 400 possible points and 15 of 16 possible first-place votes; additionally, the Muleriders are the only GAC team to feature in the poll.

The Lady Muleriders are scheduled to host 9th-ranked Angelo State on Tuesday before opening their conference slate next weekend with a trip to Weatherford to take on Southwestern Oklahoma State.

In basketball, Southern Arkansas is scheduled to play at OBU on Saturday, UAM Monday, host Arkansas Tech Feb. 25, and close the regular season at home against Harding for Senior Day on Feb. 27.