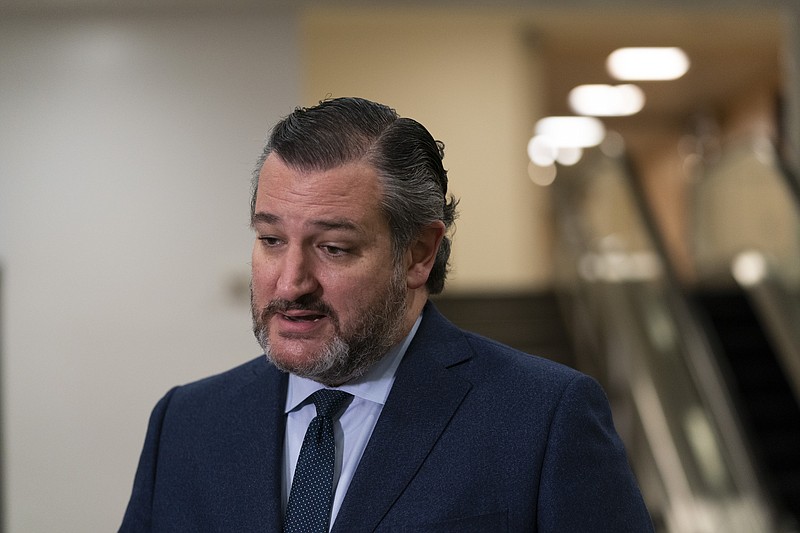 DALLAS -- U.S. Sen. Ted Cruz of Texas took his family on vacation to Cancun, Mexico, this week as his home state was paralyzed by a deadly winter storm, drawing criticism from leaders in both parties.

In a statement Thursday, the Republican said he was returning to Texas. He accompanied his family to Mexico a day earlier, he said, only after his daughters asked to go on a trip with friends, given that school was canceled for the week.

"Wanting to be a good dad, I flew down with them last night and am flying back this afternoon," Cruz wrote.

"My staff and I are in constant communication with state and local leaders to get to the bottom of what happened in Texas," he said. "We want our power back, our water on, and our homes warm."

Cruz addressed his travels only hours after The Associated Press and other media outlets reported that he had traveled to Cancun on Wednesday, with hundreds of thousands of Texans still grappling with the fallout of a winter storm that crippled the state's power grid and killed more than three dozen people nationwide, some while trying to keep warm.

[Video not showing up above? Click here to watch » https://www.youtube.com/watch?v=ozvFvj0Itn4]

The statement did little to quell a political backlash that comes as Cruz eyes a second presidential run in 2024. He is already one of the most villainized Republicans in Congress, having created adversaries across the political spectrum.

More recently, he emerged as a leader in former President Donald Trump's push to overturn the results of the November election. Billboards calling for his resignation stood along Texas highways earlier in the month.

Even the state Republican Party chairman declined to go to Cruz's defense Thursday.

"That's something that he has to answer to his constituents about," Texas GOP Chairman Allen West said when asked whether Cruz's travel was appropriate while Texans are without power and water.

"I'm here trying to take care of my family and look after my friends and others that are still without power," West said. "That's my focus."

News of Cruz's absence quickly rippled across the state. And while anger was mounting, former U.S. Rep. Beto O'Rourke of Texas -- whom Cruz narrowly defeated to hang onto his Senate seat in 2018 -- highlighted his own efforts to assist Texans during the crisis.

"We made over 151,000 calls to senior citizens in Texas tonight," O'Rourke said in a Wednesday night tweet. "One of our [volunteers] talked to a man stranded at home w/out power in Killeen, hadn't eaten in 2 days, got him a ride to a warming center and a hot meal. Help us reach more people, join us tomorrow."

Livia Trevino, a 24-year-old whose Austin home was still without water Thursday, said she felt abandoned by government leaders.

"They are taking vacations and leaving the country, so they don't have to deal with this, and we are freezing to death. We don't have water, and we don't have food," she said.

In his statement, Cruz said his family had lost heat and power as well.

"This has been an infuriating week for Texans," he said.

The situation will likely not help Cruz's political future. His current term expires in early 2025, and the unofficial beginning of the next Republican presidential primary election is two years away.

Still, Democrats across Washington were eager to talk about the controversy.

One of Cruz's most aggressive critics, Rep. Alexandria Ocasio-Cortez, encouraged her supporters Thursday to volunteer for a "welfare check phone bank" to help Texans affected by the storm.

"So many elected leaders in Texas have failed their constituents," the New York Democrat wrote in an email. "Instead of focusing on relief, they've chosen to go on Fox News to spread lies or to board a plane to Cancun."

"I don't have any updates on the exact location of Sen. Ted Cruz, nor does anyone at the White House," Psaki said, adding that President Joe Biden's administration is focused on "working directly with leadership in Texas and surrounding states on addressing the winter storm and the crisis at hand."

Cruz's office declined to answer specific questions about the family vacation, but his staff reached out to the Houston Police Department on Wednesday afternoon to say the senator would be arriving at the airport, according to department spokesperson Jodi Silva. She said officers "monitored his movements" while Cruz was at the airport.

Silva could not say whether such requests are typical for Cruz's travel or whether his staff had made a similar request for his return flight.

U.S. Capitol Police officials and the Senate sergeant-at-arms have encouraged lawmakers and their staffs to be conscious of potential threats and to consider advising law enforcement about their travel at airports and other transportation hubs.

Cruz's office did not immediately say whether the senator would self-quarantine on his return. The Centers for Disease Control and Prevention advises people who have traveled to get a coronavirus test three to five days after their return and to quarantine for a full week, regardless of the test results.

Cruz checked in for his return flight Thursday afternoon in Cancun and walked briskly through the terminal pulling a roller bag to security. He wore a golf shirt, jeans and a mask in the style of the Texas state flag.

The senator was accompanied by a Spanish-speaking man wearing a black polo shirt with the name and logo of The Ritz-Carlton hotel chain.

Cruz told reporters that he planned to "go home and keep working to get the grid reopened, to get power restored, to get the water back on."

"A lot of Texans are hurting, and this crisis is frustrating. It's frustrating for millions of Texans. It shouldn't happen," he said.

Information for this article was contributed by Steve Peoples, Jake Bleiberg, Dan Christian Rojas, Darlene Superville and Acacia Coronado of The Associated Press; and by Felicia Sonmez, John Wagner and William Wan of The Washington Post.

People wait in line to fill propane tanks Wednesday, Feb. 17, 2021, in Houston. Customers had to wait over an hour in the freezing rain to fill their tanks. Millions in Texas still had no power after a historic snowfall and single-digit temperatures created a surge of demand for electricity to warm up homes unaccustomed to such extreme lows, buckling the state's power grid and causing widespread blackouts. (AP Photo/David J. Phillip) 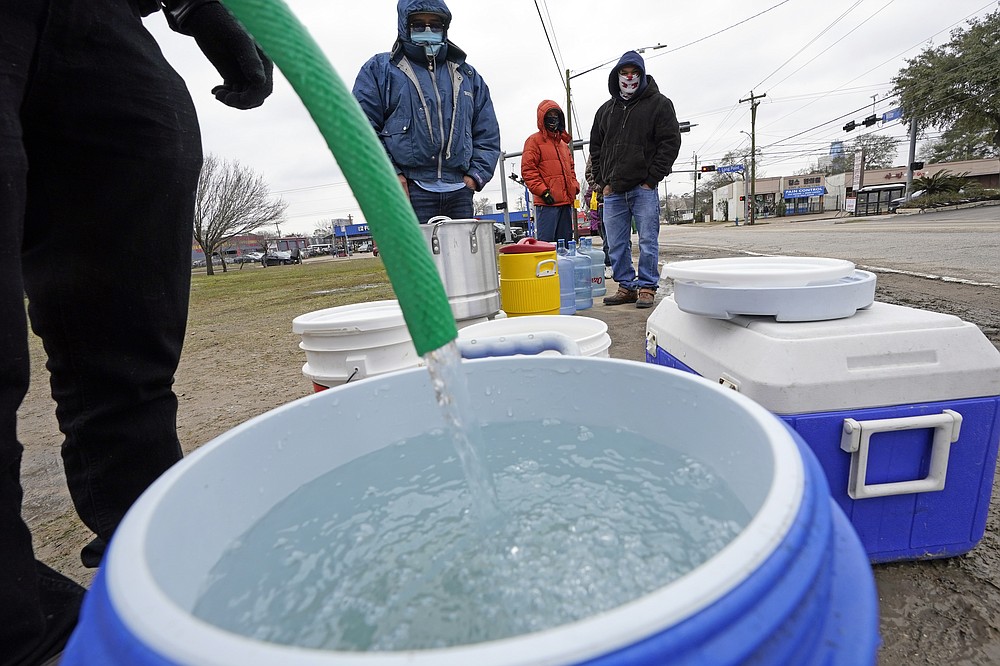 A water bucket is filled as others wait in near freezing temperatures to use a hose from public park spigot Thursday, Feb. 18, 2021, in Houston. Houston and several surrounding cities are under a boil water notice as many residents are still without running water in their homes. (AP Photo/David J. Phillip)