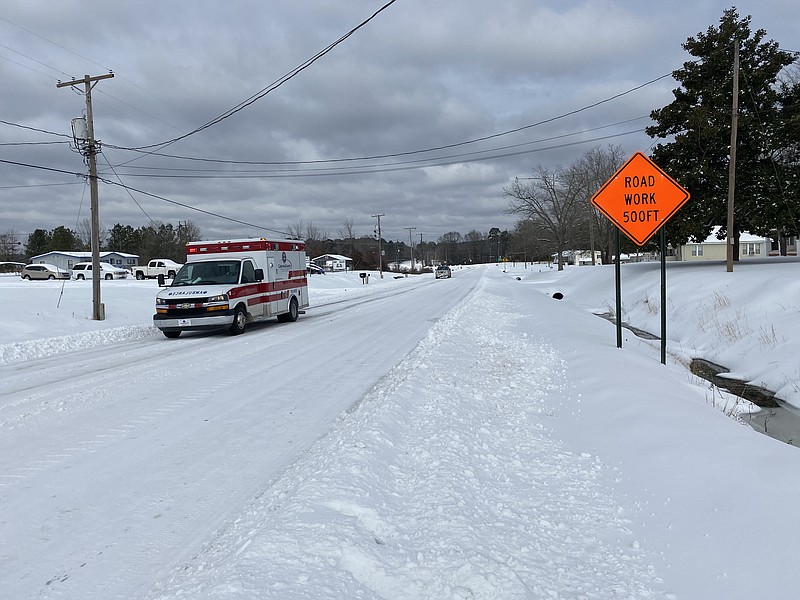 An ambulance drives up North Vine street in Magnolia flashing its lights and responding to a call. Newton said that the typical response of 5 minutes has been extended up to 25 minutes in some areas to the hazardous conditions created by the ice and snow. (Rhett Gentry/Banner-News)

The Columbia County Ambulance Service (CCAS) has handled multiple calls this week, but response times have been longer due to the extreme weather conditions, according to CCAS CEO Amanda Newton.

“We are not shut down,” said Newton. “We are still here.we are still responding - we are running a lot - but an ambulance is not a snowplow.”

Newton, who is also a paramedic and serves president of CCAS, said the average response time for the ambulance service is five minutes, but some calls in outer areas of the county have taken up to 25 minutes because of the road conditions. She said CCAS’ ambulances do have studded tires, but no vehicle is built to handle 9-12 inches of snow and icy roads.

In rural areas, Newton said it is difficult for paramedics to determine where the roads end and ditches begin, making travel both slow and treacherous for the ambulance service. She also said that out-of-town transfers are limited, based on road closures and the safety of the paramedics and patients.

“If you have a chronic medical problem and notice that you’re having more trouble managing your condition at home than you normally do, please call us early rather than waiting until you’re in severe distress,” said Newton.

She offered the warning as a heads up to residents that because of the slower response times, it is better to call early - even if residents are able to manage their condition after the call is made. Should the ambulance service be called, yet no longer needed during the wait, Newton said that residents should call CCAS to inform them of the change so that paramedics can respond to other calls.

Newton said the most common injuries during extreme weather have been of an orthopedic nature, such as broken legs, feet and arms. She said these have occurred from people walking on the snow and ice and participating in outdoor activities.

She recommended that residents proceed with caution when walking on frozen sidewalks and steps, taking things slow and steady to prevent a fall.

When playing in the snow, Newton recommended that residents dress warm and come inside often to warm up to prevent hypothermia and frostbite.

“The hands of small children playing in the snow are especially vulnerable to frostbite,” said Newton.

When preparing for a drive, Newton recommended that all vehicle occupants bundle up, bringing snacks and blankets with them to stay warm should they get stranded.

“Wreckers are busy and you may find yourself waiting a long time for a tow,” said Newton.

According to the National Weather Service (NWS), a hard freeze warning was issued for Columbia County Thursday night.

A hard freeze occurs after snow and ice has thawed and is subjected to frigid temperatures, resulting in layers of ice on those areas. The high temperature Thursday was 34 degrees, with Friday’s forecast by the NWS to be 35 degrees.

Temperatures are expected to rise Saturday with a high of 42 predicted and no precipitation. Temperatures are forecast to continue to rise Sunday with the possibility of rain, which may begin to thaw the snow in the county.