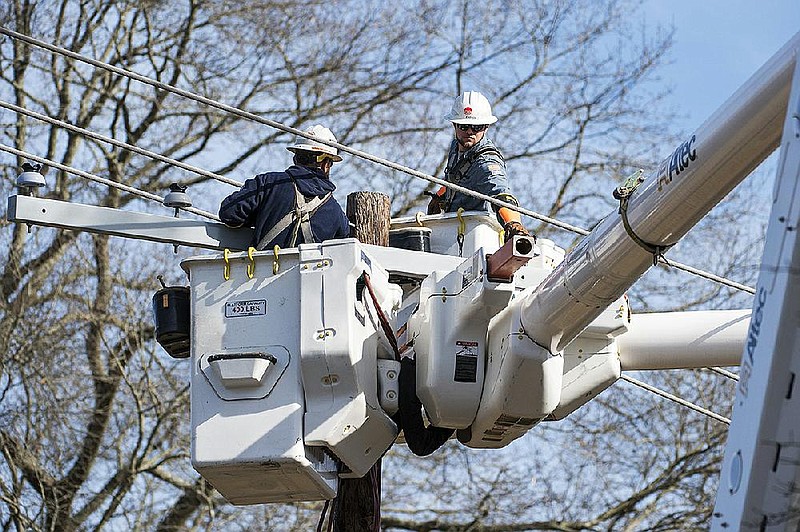 Entergy crew members work to remove a damaged wooden cross arm and affix a new fiberglass replacement in Maumelle on January 8, 2019. The forced outage to replace the arm was estimated to last three hours and affected approximately 400 users including three businesses and a four way traffic light. (Arkansas Democrat-Gazette/Jeff Gammons)

The outages were not caused by the weather or an accident; in fact, Magnolia was hit by forced service interruptions caused by overuse during the extreme winter weather conditions seen throughout the region.

In a press release on Tuesday night, Willie Wilson, vice president in operations and system storm incident commander at Entergy, stated that the “high level of demand for electricity has caused a strain on the system.”

“Due to extremely cold temperatures over the last several days, the demand for electricity has reached an all-time high,” the Entergy press release states. “The implementation of this load shed across the Entergy region will help ensure an adequate reserve margin, which helps ensure Entergy is better positioned to manage through additional extreme weather this week.”

The company posted on Facebook shortly after distributing the press release, stating that the rolling outages in Entergy Arkansas’ network, which began at 7 p.m. Tuesday, were concluded at 9 p.m.

The company stated that it took the action at the direction of the Midcontinent Independent System Operator (MISO), which provides electric power across 15 states and the Canadian province of Manitoba, according to the MISO website. Entergy stated that the rolling outages were used “as a last resort to prevent a more extensive, prolonged power outage that could severely affect the reliability of the power grid.”

In a now-deleted Facebook post, the company said customers were not afforded notice prior to the start of the rolling blackouts because the shut-offs needed to begin immediately.

“You may recall, however, that we have been requesting for the last two days that customers conserve power to prevent forced outages,” the now-deleted post read. “And we thank you very much for doing so because your help was part of the reason we were able to discontinue the outages at 9:00 tonight.”

Wasson said Wednesday that mandatory rolling outages are still a possibility, should the demand for electricity go over the amount that can be generated.

“We are continuing to encourage customers to reduce their usage in order to prevent another rolling blackout,” said Wasson. “We hope that we don’t have to do that again, but it is all based on the generation capacity to be able to meet the demand.”

Wasson said that one of the driving factors for demand is heaters, which he considered to be the “majority of the consumption production.” He stated that customers should set their thermostats in the high 60s rather than temperatures they’ll be comfortable in just a t-shirt in an effort to reduce the energy demand. The energy demand is high enough that Entergy is relying on generational resources from areas outside of the state.

“We are a member of MISO. They are the ones who help bring generational resources to the customers of Arkansas,” said Wasson, “They ensure that we choose the most reliable and efficient (resources) to keep cost down for all of us.”

Wasson stated that through MISO, there is a large diversification of resources available for energy, including solar, nuclear, natural gas, hydroelectric and coal.

“The cold has hindered some generational resources from operating at full capacity,” said Wasson, “That is another reason we are seeing such a strain on our grid.”

“They are well prepared for it in terms of their heating systems as well as there homes are probably more efficient,” said Wasson, “Their homes are better insulated and they also have different preparations in order to consume less electricity and be a little more efficient. We aren’t used to that. A lot of our homes are not as efficient as they could be and we are seeing the results of it.”

On the Entergy side, Wasson said that part of the equation on the energy demand is keeping customer prices down as little as possible by not having the added infrastructure.

“If more power plants were to be built, it could be a gross exaggeration of what is needed for the majority of the time. Then we are left paying higher bills,” said Wasson.

Wasson also stated that even if more power plants were built to keep up the demand during extreme weather, that same weather could cause for those power plants to go into limited production.

Wasson said that while he did not have any records showing the last mandatory outages to occur prior to Tuesday, he spoke with a co-worker of his, an employee of 40 years, who stated that no rolling outages had occurred during his tenure with the company.