‘Obamacare’ sign-ups reopen as Democrats push for boost in aid 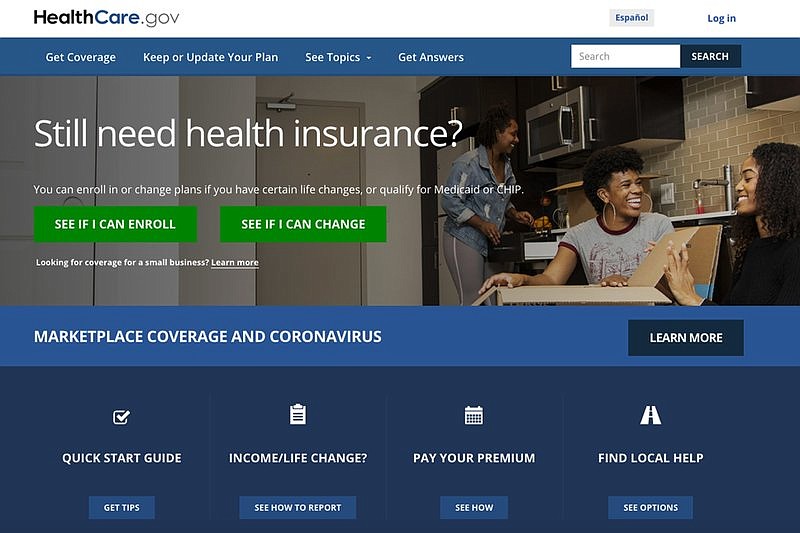 This screen grab from the website shows the main web page for the HealthCare.gov. HealthCare.gov’s market for subsidized health plans reopens Monday, Feb. 15, 2021, for a special three-month sign-up window, as the Democratic-led Congress weighs legislation that could cut premiums by double digits for many. (Centers for Medicare and Medicaid Services via AP, File)

WASHINGTON — HealthCare.gov’s market for subsidized health plans reopens Monday for a special three-month sign-up window as the Democraticled Congress pushes a boost in financial help that could cut premiums by double digits.

This enrollment period during the coronavirus pandemic is an early test of President Joe Biden’s strategy to use the Affordable Care Act as a springboard toward health coverage for all. Advancing on a parallel track, the new COVID-19 relief bill from House Democrats would offer a generous, though temporary, increase in subsidies for people covered by the law known as “Obamacare.”

“It is a hugely important signaling move,” said Katherine Hempstead of the nonpartisan Robert Wood Johnson Foundation. “The administration is doing more than having open enrollment here, they’re saying they want to make this coverage more affordable.”

While policy experts like Hempstead are taking note, it’s unclear how uninsured Americans will respond. Former President Barack Obama’s health law has been on the books over a decade, but surveys consistently show that many people lacking job-based insurance do not realize they may qualify. The Congressional Budget Office estimates that about 33 million people are uninsured this year.

At Foundation Communities, an Austin, Texas, nonprofit that serves low-income working people, program director Kori Hattemer says she’s seeing an uptick in interest. Although her agency had not started advertising, appointments for enrollment assistance booked up quickly. Volunteer counselors are being called back.

For clients, “it’s their last chance probably to enroll in health insurance for 2021,” Hattemer said.

One is Jacklindy Barradez, a housekeeper and restaurant worker unemployed since the start of the pandemic. Her husband hung on to his maintenance job, but the couple and their two children are uninsured. Barradez said a friend told her about the health law and she intends to follow through.

With no health insurance as the pandemic stretches into its second year, Barradez is uneasy. “We are not exempt from having something happen to us,” she said in Spanish, her first language. “Not having the means to respond is extremely worrisome.”

The Biden administration is going the extra mile to try to sign up people such as Barradez.

HealthCare.gov will be accepting applications through May 15, a period about twice as long as annual open enrollment. The Centers for Medicare and Medicaid Services, which runs the program, has a $50 million advertising budget, five times what the Trump administration would spend on annual open enrollment. Under Biden, there will be a special emphasis on reaching Black and Latino communities that have borne a heavy burden from COVID-19.

Across the country, people in the 36 states served by the federal HealthCare.gov marketplace will be able to apply. Additionally, most states that run their own marketplaces are matching the federal effort, giving it the feel of a national campaign.

The appeal for uninsured people could become much clearer if Congress increases premium subsidies as part of its next virus relief package.

“That would be a great incentive to get people in the door,” said Tara Straw, a health policy analyst with the Center on Budget and Policy Priorities, which advocates on behalf of low-income people. More generous help would be available not just to the newly enrolled, but to all who are covered through the law’s marketplaces.

By the budget center’s calculations, a family of four making $50,000 would pay $67 a month in premiums for a standard plan, instead of an average of $252 currently, while also qualifying for help with deductibles and copays. The boost in premium assistance would be available for this year and for 2022.

The Democratic proposal would allow more solid middle-class households to qualify for financial help. On the opposite end of the scale, those who’ve experienced unemployment would qualify for extra-generous subsidies.

Republicans who tried but failed to repeal the law under President Donald Trump are calling the Democratic plan a waste of taxpayer dollars. But many Democrats see it as merely a down payment on a more ambitious health care agenda.

The Obama health law now covers more than 20 million people through a combination of subsidized private plans and, in most states, expanded Medicaid.