Magnolia residents revel in the snow 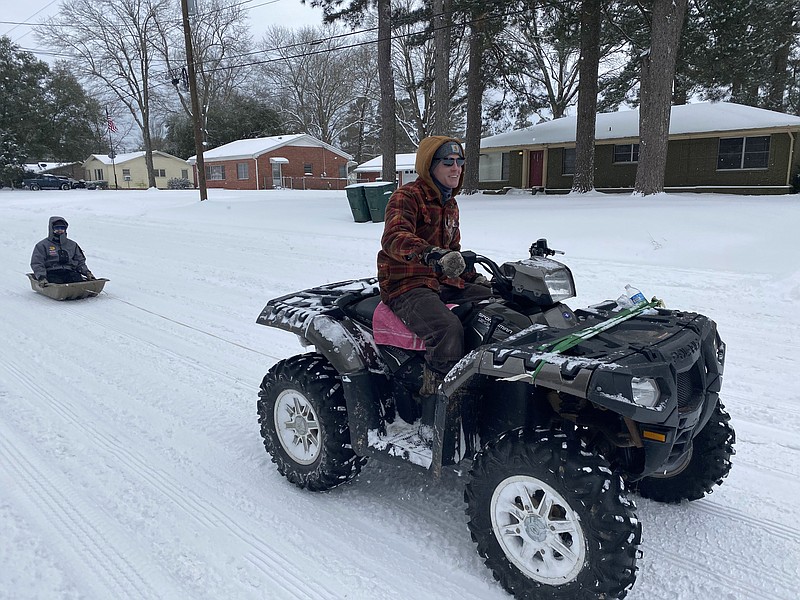 A Magnolia resident takes his four-wheeler up North Jackson towards SAU towing a sled rider behind him. Fourwheelers towing sleds was a common sight during yesterday's snow day, with enthusiasts taking to the streets and fields to slide through the snow.

Icy rain on Valentine’s evening turned to snow the following morning, blanketing Magnolia with 4 to 5 inches of snow before noon.

The snow left many residents unable to leave their driveways, as it reached midway up most vehicles’ tires and required a snow shovel to clear the way. The motorists who made it past their driveways were met with both snow-packed and icy roads, both causing drivers to operate their vehicles slowly in order to maneuver through the difficult terrain.

Some drivers could be seen speeding up on the icy roads and fishtailing purposefully. Four-wheelers repeated the pattern, with the addition of pulling sleds with riders hanging on.

Residents were seen outside of their homes, bundled in warm clothing and taking in the sights. Children played, attempting to make snowballs out of the powdery snow as the Magnolia School District announced that it will be pivoting to remote learning for the next few days.

“MPS will pivot to Remote Learning through Wed., Feb. 17. While we realize the chances are high that conditions will not improve, we will continue to assess weather and roads and announce plans for (the) remainder of the week on Wednesday. Please be safe and enjoy the snow!” a statement posted on the MSD’s website read.

On the streets, residents were walking around the blocks of their neighborhoods, stopping to rub their hands together and stretch their legs during their icy adventures. One thought remained common among the residents of Magnolia: this snow was unprecedented in their lifetimes.

“We had that big ice storm in 2001, but it never snowed (in Magnolia) like this,” said Coach Mike Odell of the Magnolia School District, a nearly life-long resident of Magnolia.

He and his son, John, were going for a walk, enjoying the snowfall outside of the high school. Mike joked that John can now say he walked to school in the snow.

“This is major. Look at all this snow! I was surprised when I woke up,” said Chelsea Dunkin, a five year resident of Magnolia.

Dunkin had her phone set up outside on a tripod Monday morning, saying she was preparing to shoot photos and videos in the snow. She also stated that the snow didn’t cancel her work; instead, her employers were coming to pick her up Monday evening. She said that she was looking forward to experiencing her first snow with her daughter.

Trey Beasly and Autumn Morgan, SAU graduates and five-year residents of Magnolia, both stated that this snow was something they had never experienced in Arkansas. They were in their lawn Monday, taking photos and enjoying the snow. They said that their snow day plans would be mostly indoors.

Forecasts from the National Weather Service indicated a small chance of snow on Tuesday night that sharply increases for most of Wednesday, before slowing on Thursday evening.