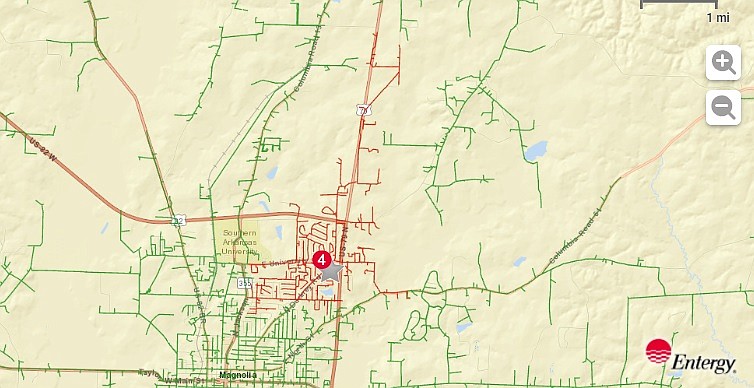 This screengrab from the Entergy website shows the northeast portion of Magnolia that went without power around 8:20 p.m.

Entergy is performing controlled service interruptions in Columbia County, according to Entergy Customer Service Manager Chris Wasson. These outages are expected to occur in 30-minute increments. Around 8:20 p.m. on Tuesday, five outages occurred in the northeast portion of Magnolia that affected 1,106 customers, according to the Entergy website.

Outages in nearby Smackover in Union County into Ouachita County are a different story.

“Due to the winter weather that is presently over your area, we are experiencing numerous scattered outages,” the outage information from Entergy stated, “Entergy personnel are working as quickly and as safely as possible to restore service.”

Entergy issued a press release regarding the power outages affecting their customers.

"Due to extremely cold temperatures over the last several days, the demand for electricity has reached an all-time high," the Entergy press release states, " The implementation of this load shed across the Entergy region will help ensure an adequate reserve margin, which helps ensure Entergy is better positioned to manage through additional extreme weather this week."

Willie Wilson, vice president in operations and system storm incident commander at Entergy, stated that the "high level of demand for electricity has caused a strain on the system."

"To the extent possible, we will rotate outages circuit-to-circuit throughout the targeted area until the event is over," he said.

Entergy stated that they will work to limit the durations of each outage, but due to the large demand on the system, options may be limited.

Wasson stated that those who lose power are asked to switch off any major electrical appliances, in particular electric heating units, and gradually turn them back on once power has been restored for at least an hour.

"We apologize for the inconvenience. We are working to repair damages and restore our system to normal grid operations as soon as possible," he said.

Entergy has ended the mandatory rolling outages at 9:30 p.m., according to a post to their Facebook page.

"Mandatory rolling outages that began at 7 p.m. have ended, for now, and we have returned the system to normal operations. All customers affected by this directive were restored by 9 p.m.," Entergy posted to Facebook.

Entergy stated, "The company took this action at the direction of our reliability coordinator, the Midcontinent Independent System Operator, as a last resort to prevent a more extensive, prolonged power outage that could severely affect the reliability of the power grid.

"We continue to face challenges related to the cold temperatures, so please be mindful of your electricity usage to help prevent the need for any additional forced outages. We’re not out of the woods yet, so please continue to conserve energy," stated Entergy.