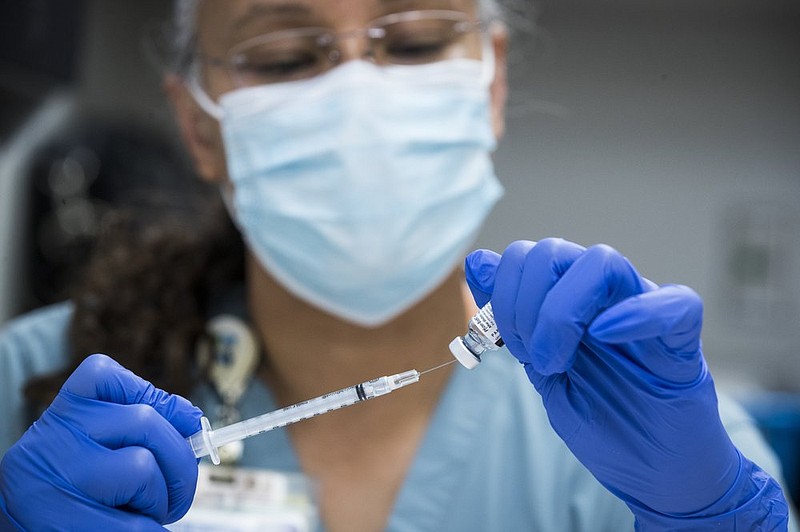 FILE - In this Thursday, Feb. 11, 2021 file photo, pharmacy technician Sochi Evans fills a syringe with a Pfizer-BioNTech COVID-19 vaccine at Texas Southern University in Houston. Coronavirus cases are continuing to decline in the U.S. after a winter surge. Researchers at Johns Hopkins University say the seven-day average of new coronavirus cases in the country dropped below 100,000 on Friday, Feb. 12 for the first time since November 4. (Brett Coomer/Houston Chronicle via AP, File)

ATLANTA — Average daily new coronavirus cases in the United States dipped below 100,000 in recent days for the first time in months, but experts cautioned Sunday that infections remain high and precautions to slow the pandemic must remain in place.

The seven-day rolling average of new infections was well above 200,000 for much of December and went to roughly 250,000 in January, according to data kept by Johns Hopkins University, as the pandemic came roaring back after it had been tamed in some places over the summer.

“We are still at about 100,000 cases a day. We are still at around 1,500 to 3,500 deaths per day. The cases are more than two-and-a-halffold times what we saw over the summer,” Dr. Rochelle Walensky, director of the Centers for Disease Control and Prevention, said on NBC’s “Meet the Press.” “It’s encouraging to see these trends coming down, but they’re coming down from an extraordinarily high place.”

On Saturday, the seven-day rolling average for deaths was around 2,500. That number peaked at more than 3,300 earlier in the winter, according to Johns Hopkins.

The U.S. saw a spike of more than 5,400 deaths reported Friday — nearly half from Ohio, where authorities said earlier in the week that they planned to add deaths to the state’s tally over the course of a few days after discovering as many as 4,000 unreported COVID-19 fatalities.

Walensky added that new variants, including one first detected in the United Kingdom that appears to be more transmissible and has already been recorded in more than 30 states, will likely lead to more cases and more deaths.

The U.S. has recorded more than 27.5 million virus cases and more than 484,000 deaths, according to the Johns Hopkins data.

With parents and political leaders eager to have children around the country back in school for in-person learning, it is important that people continue to observe precautions, Walensky said.