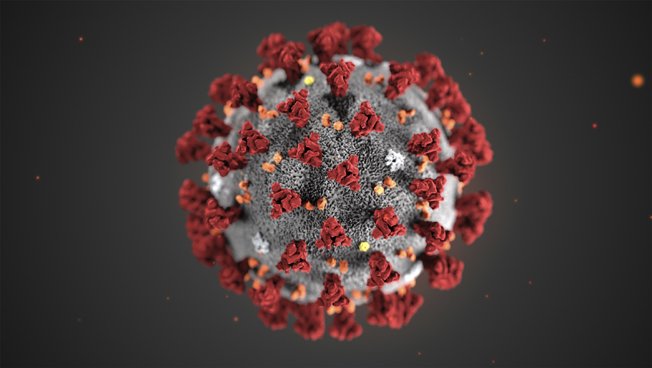 This illustration provided by the Centers for Disease Control and Prevention shows the 2019 Novel Coronavirus (2019-nCoV). Photo by Associated Press

Active COVID-19 cases in Arkansas fell Sunday by 487 from Saturday, leaving a total of 16,324 people currently ill with the coronavirus, according to Sunday’s Arkansas Department of Health update.

The state reported 672 new cases on Sunday, increasing the total number of reported cases in the state since March to 306,736. Hospitalizations were up by 31 from Saturday, according to the update, and two more COVID-19 patients began using ventilators.

An additional 15 deaths were reported, raising the death toll to 5,076.

Another 8,988 PCR and 212 antigen tests were reported as having been administered, for a total of 84,787 total tests so far this month.

“Our testing is down a little, but we remain below our active case number from last week,” Gov. Asa Hutchinson said Sunday afternoon on social media.

The state has received 1,400 more doses of vaccine since Saturday, and health care providers gave 7,780 more doses. A total of 377,678 doses have been administered (67.3% of doses received).

The federal program through CVS and Walgreens administered 415 more doses in Arkansas as of Sunday. Since beginning inoculations on Dec. 28, the program has given out 19,441 (39.4%) of the 49,400 doses allocated for the state, according to the Department of Health.

In total, 397,119 doses have been given to Arkansans — roughly 13.2% of the state’s population, based on 2019 Census Bureau population estimates.

More information about the virus and vaccines is available at www.healthy.arkansas.gov/programs-services/topics/novel-coronavirus.