Razorbacks winging it without Sills 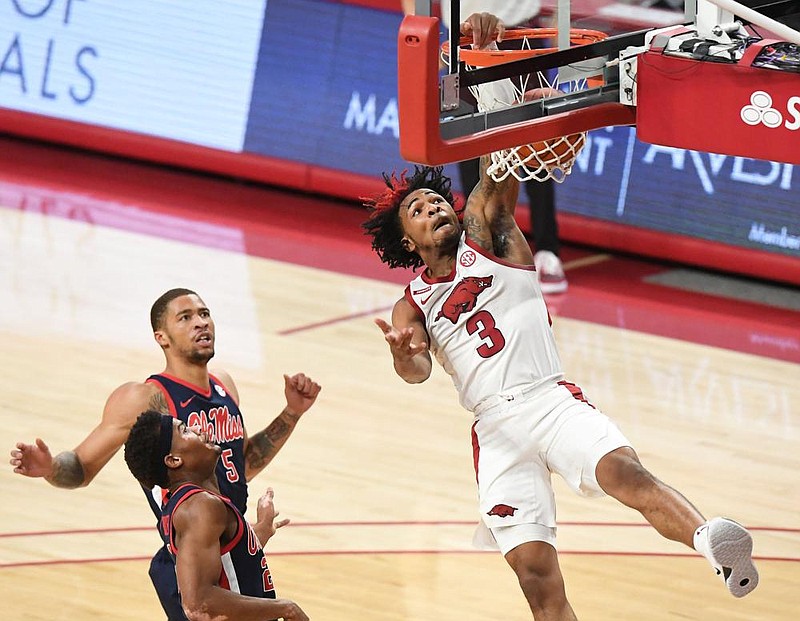 For now, at least.

Sills, a 6-2 junior from Jonesboro, hasn't missed a game in his three seasons with the Razorbacks. He's played in all 85 games since the start of 2018-19 season.

That playing streak likely would have ended for Sills, according to Arkansas Coach Eric Musselman, if the Razorbacks had played Texas A&M on Saturday in Walton Arena as originally scheduled.

The Arkansas-Texas A&M game was postponed because of positive covid-19 tests, contact tracing and quarantining within the Aggies' program.

"Based on [Friday] if we had to play today, I would assume Desi would not play," Musselman said on Saturday.

Sills, who is left-handed, injured his left shoulder when he went down hard on the Walton Arena court on a drive with 11:57 left in the first half of the Razorbacks' 61-45 victory over Mississippi State last Tuesday night.

The officials stopped play as Sills was checked by Arkansas' training staff.

Musselman became so incensed a foul wasn't called that he drew a technical foul from official Pat Adams.

Sills, bent over in pain and holding his left shoulder, was taken to the locker room and didn't play the rest of the game.

Musselman said Saturday that the training staff has determined there is no structural damage to Sills' shoulder and that as far as he knows it's a "stinger," as Musselman also described the injury after the game.

"I mean, medically I'm pretty bad," Musselman said. "The only thing I've heard is 'stinger.' So I can't go off anything other than that.

"But the trainer's not worried about anything being structurally damaged ... So it's more pain tolerance. And a stinger -- for anybody in any sport -- those things hurt. I guess that's how they get the name 'stinger.' "

It's uncertain if Sills, who is averaging 10.6 points, 3.4 points and 24.9 minutes, will be able to play in Arkansas' next game at Kentucky on Tuesday night. Musselman said Sills couldn't use his left arm to shoot on Friday.

"We have been doing a lot of one-minute shooting where we try to break up the monotony of practice," Musselman said. "We'll have three or four defensive stations and we'll break it up and just say, 'One minute shooting,' and everybody will go to a basket and try to get up as many three balls as they can in one minute.

"We've been doing that since we've been working on this prep, and [Sills] is unable to shoot. He goes off to the side and shoots what you would consider one-foot baskets with his off [right] hand."

Musselman said if the Razorbacks had played on Saturday, freshman forward Jaylin Williams also likely would have been out.

Williams was limited to nine minutes -- all in the first half -- against Mississippi State after suffering a bone bruise on his right knee at Oklahoma State.

"I would assume Jaylin Williams probably wouldn't play, and if he did it would be for five to 10 minutes like it was last game," Musselman said. "But his mobility would be hampered."

Musselman said he would have anticipated two other Razorbacks dealing with ankle injuries -- senior forward Justin Smith and freshman guard Moses Moody -- would have played Saturday if there had been a game.

Moody sprained his ankle in practice last week and didn't practice Monday, the day before the Mississippi State game, but he played 38 minutes and scored 13 points.

"Moses seemed to be moving better [Friday] than prior," Musselman said. "So I would think he would be fine."

Smith underwent right ankle surgery on Jan. 1 and missed four games. He has started all five games since returning, but missed practices between playing because of ankle soreness.

"I would think that Justin would play," Musselman said.

Despite the Razorbacks' injury situation, Musselman said he was disappointed and frustrated for his players that the Texas A&M game was postponed.

"No one knows what's going to happen next week or the week after that or whatever," Musselman said. "So even having some injuries, I still wanted to do everything possible to play a game, and so did our players.

"Unfortunately that did not happen."