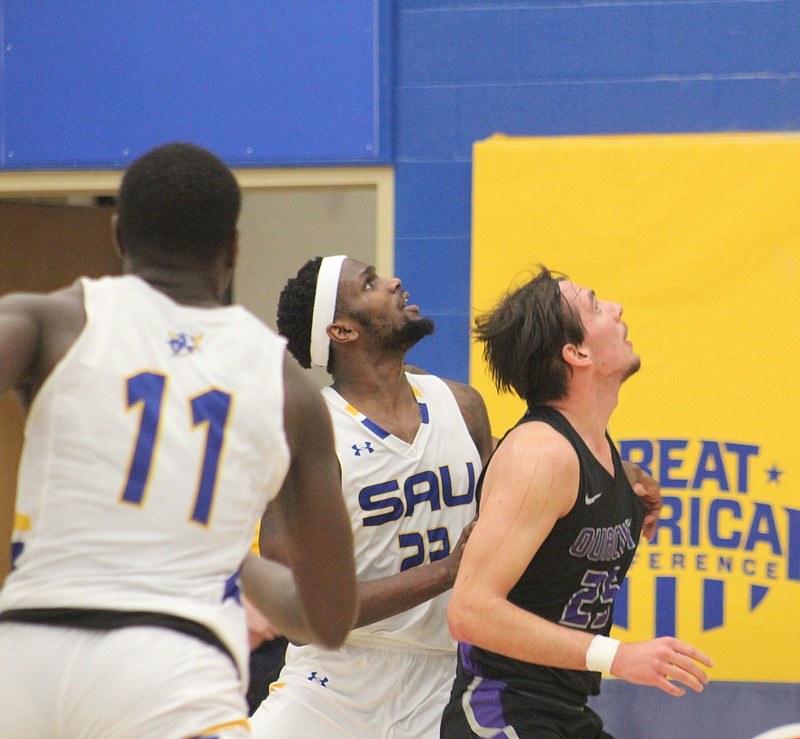 SAU senior Devante Brooks (23) positions himself behind OBU’s Leon Kalinic in an attempt to get a rebound. Both eventually fouled out as the Muleriders defeated the Tigers Thursday night. SAU plays at Henderson State this afternoon in Arkadelphia. (Banner-News/Chris Gilliam)

Southern Arkansas used a 12-0 run in the second half to pull away from Ouachita Baptist Thursday night at the W.T. Watson Center.

Though SAU coach Andy Sharpe wasn’t overall pleased with the, he was happy his team managed a 68-57 victory. The Muleriders (7-2, 6-2 GAC) moved back into the first place slot of GAC standings following UAM’s loss to Harding.

“It was good to get the win. But with the way the officiating was going, it can throw you off your game if you are not mentally tough. But overall, we did a little better taking care of the ball and there were some bright spots on our part,” said Sharpe.

The Muleriders will travel to Arkadelphia today for a 4 p.m. game against the Reddies and will host UAM Monday night. SAU and Henderson have met twice this season, with the Muleriders winning by scores of 83-77 and 68-66.

Against the Tigers, the game was tied four times but the Muleriders led 32-28 at halftime.

The game deadlocked at 41-41 with 14 minutes to play, but senior Aaron Lucas sparked the 12-0 run with a pair of 3-pointers. The Muleriders eventually went up by 13 points, 57-55, with just under seven minutes to play.

“It’s hard to get a win in this league, no matter who you play,” said Sharpe, whose team has played the Tigers three times so far this season.

The coach noted that it’s tough when you play the same team over and over, but credited his staff for motivating and getting the players ready each game.

Lucas, who had three shots from beyond the arc, led the Muleriders in scoring with 18 points. He was followed by Jalen Brooks and Jessie Davis Jr. with 11 apiece.

Kendarious Smith led the Tigers with 17 and Marvin Williams -Dunn added 12. Both knocked down four 3-pointers.