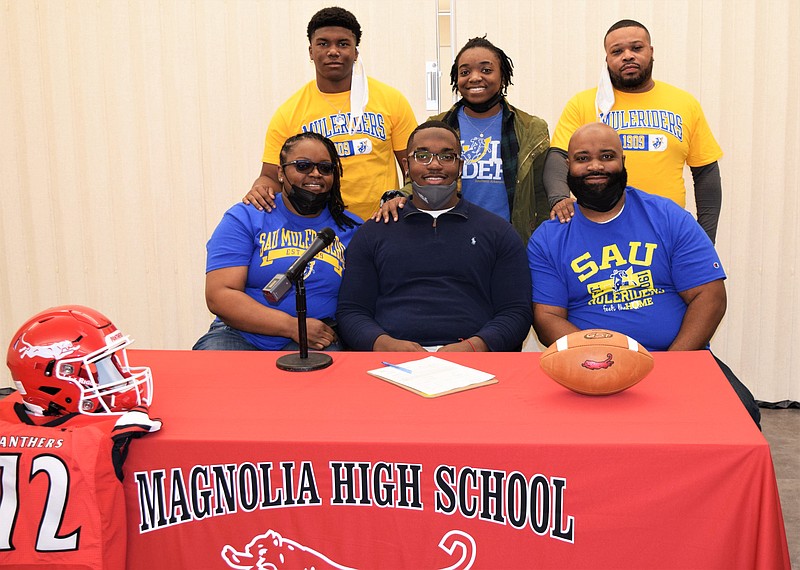 “I am happy and excited they (Muleriders) gave me the opportunity to further my education and play at the next level,” said Mike Jones. He added that the Magnolia football program does a good job of preparing athletes not only for game nights, but for the next level if that’s their goal.

“The coaches work you hard and encourage y0u to get better. It was a good experience for me to be part of that,” said Jones.

The athlete not only excelled on the field, but is a sound academic student as well. Some non-athletic recognition include being named to the MHS Honor Roll, Student of the Month, Mr. MHS, Most Talented and being inducted into Mu Alpha Theta.

Jones, also an all-conference track performer and member of the Panthers’ state championship team two seasons ago, said the football offer from SAU was really a surprise.

“It was coming down where I had to decide on a college. I thought I wasn’t going to get an offer from SAU. Then one day I received a text from a coach who said they were interested in me and it went from there,”explained Jones.

He played both on both the offensive and defensive line at Magnolia, helping second-year head coach Mark King and the Panthers finish 8-3 on the season.

In the Arkansas Democrat-Gazette’s final Class 5A poll, the Panthers were ranked sixth behind state champion Pulaski Academy, Little Christian, Wynne, Harrison and and Texarkana. The Panthers defeated Little Rock Christian during the regular season and fell by a touchdown to Harrison in the opener. Their conference game against Texarkana was canceled due to COVID-related issues.

After eliminating Greenbrier and pounding Pea Ridge in the playoffs, Magnolia was eliminated by Pulaski Academy for the second consecutive year.

Following the game, King said, “We’ve got something to build on. We’ve got a lot of young kids. I told the team not to hold their heads down and walk off with pride. This senior group helped rebuild and bring pride back to Magnolia football in the past two years. We had a great year and I’m sure no one picked us to be where we are. The future is bright for Magnolia football as long as we keep working.”

King, in his first season at Magnolia, helped the Panthers end a 10-year playoff drought. This past season, in the midst of a pandemic and having two contests canceled, Magnolia managed to two playoff games and improve its record from the previous season.

First year SAU head coach Mike McCarty and his staff inked a total of 39 high school standouts on National Signing Day, with 11 recruits from Arkansas. Twenty-four players came from Texas and four from Louisiana. The signing class’ average GPA is 3.4.

“We are very proud of our 2021 signing class,” noted McCarty, who was named the program’s 20th head coach on November 12. “Considering all of the COVID-19 concerns, our University worked hard assisting our staff as we brought these great, young men to campus. We are looking forward to the fall when this class can showcase its talent to the community of Magnolia and Southern Arkansas University.”