After taking team photo with trophies, Hogs head to Tampa for Outback Bowl 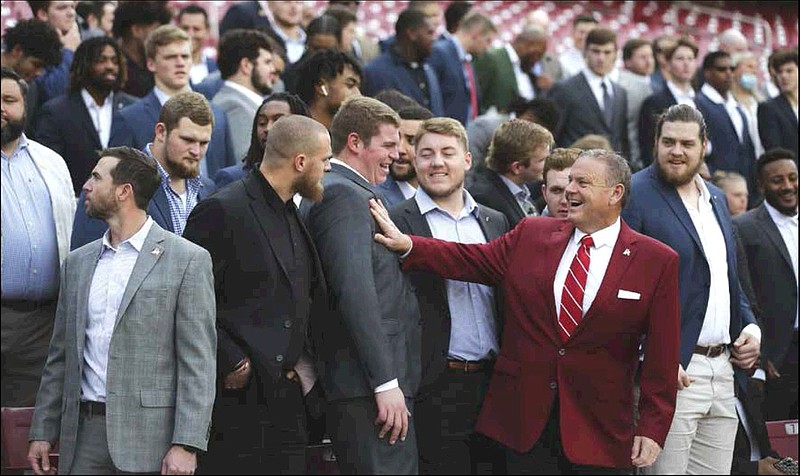 TAMPA, Fla. -- When's the last time a coach talked about a team photo like a cherished moment in time?

The notion sounded a little quaint when he brought it up, but that's the approach University of Arkansas Coach Sam Pittman took the last couple of weeks when discussing in detail the Razorbacks' team photo, which took place on Sunday.

The Razorbacks donned dress suits and posed in front of their three trophies inside Reynolds Razorback Stadium before departing for Tampa, Fla., and their Outback Bowl against Penn State on Saturday.

When asked on Dec. 14 if the team was traveling separately or together to Tampa, Pittman first touted the picture.

"I want to travel as a team No. 1," Pittman said. "No. 2, I want to take the team picture that we had talked about, and everybody needs to be here. So we're going to have our suits on and take a picture before we leave in the stadium with the three trophies." Speaking that night on his radio show, Pittman added more detail and color.

"We're Arkansas and I'm saying we're a bit different and proud of it," he said before sounding rueful about the days of team pictures in shoulders pads.

Pittman talked about the next phase to the photo plan, also.

"We're going to move one of them out of the way and if we're fortunate enough to win the bowl game we're going to photo shop the bowl trophy in there as well, and then we're going to give them to everybody on the team and they'll cherish those in their office or in their home forever," Pittman said. "But we've never had the three trophies and we're going to take a team picture with them."

Arkansas snapped long losing streaks to the Aggies and both sets of Tigers to get those trophies back on campus. As if to exhibit the team's blue collar approach, Pittman had the trophies placed on the entryway floor at the Smith Center the day after claiming them this season.

Apparently Pittman has spoken passionately about the trophy photo ops with the team on more than one occasion.

For a football program that had lost 16 consecutive games with a trophy attached, perhaps Pittman's approach was the way to go for pride and motivation. Since the Razorbacks had never possessed all three of their trophy game prizes at the same time, they've clearly never won four trophies in a season.

The Razorbacks have heard Pittman touting the picture.

"I feel like that's him letting us know that he's proud of us," junior safety Simeon Blair said. "That just allows us to keep working hard, because when you have a coach that's proud of you, it makes you want to play harder for that guy because he shows us off to the world as much as he can.

"So we have to play hard for him. That makes me want to play harder for him because of how proud he is of us." Defensive tackle Isaiah Nichols of Springdale, agreed with Blair of Pine Bluff.

"I feel like Coach Pitt always goes the extra step to make sure we're getting credit for our hard work," Nichols said. "No mistakes about it, we work. Like they ask a lot of us, but at the same time, it's like we know that's what's needed to be successful.

"We have a team that's fully bought in. We were so used to losing and being the bottom, the short stick of the bunch, we're just so happy to have a coach in here that leads us in the right way and who's so proud of us. I'm really thankful for Coach Pitt. I can speak for the whole team, we're thankful for how much he supports us and how much he shows how hard we work." Junior defensive end Zach Williams a Joe T. Robinson graduate in Little Rock, said the Razorbacks finishing at a bowl game in Florida was like something from his dreams.

"Because when I first came here, we were like 2-10, stuff like that," Williams said. "I said, 'This is a program we have to change.' And from the time I've been here, it's been a major 180. It's been great. The coaching staff has been great." Williams' maternal grandparents live in the Tampa/ Clearwater area of Florida.

It was a pretty special moment for me to know we're playing in the Outback Bowl there," he said. "It makes me want to play even harder for what I have going on there." Penn State (7-5) got a one-day head start at the bowl site, arriving on on Christmas night and getting in a Sunday practice at Jesuit High in Tampa. The Razorbacks got a one-day head start on the Nittany Lions by starting their on-campus bowl preparations the day before their Big Ten opponent.

"I feel like that's him letting us know that he's proud of us. That just allows us to keep working hard, because when you have a coach that's proud of you, it makes you want to play harder for that guy because he shows us off to the world as much as he can."