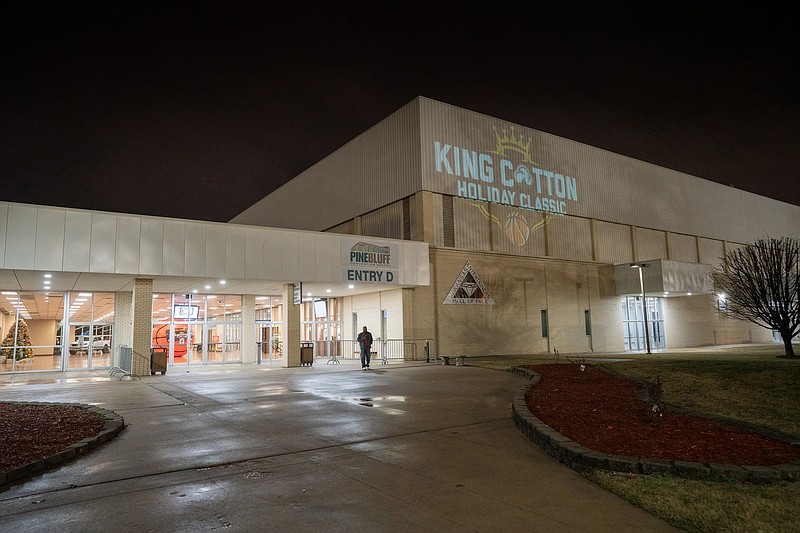 Two boys bracket champions will be crowned at the King Cotton Holiday Classic, one of the premier high school basketball tournaments in the nation.

Maybe both champions will come from Arkansas – or Texas – or St. Louis. Maybe a Mississippi team and Chicago ballclub will hoist trophies.

While King Cotton offers two coronations on the same court, the two eight-team boys brackets are also a necessity to avoid extraneous matchups among neighboring teams.

"It has to do with the variables," tournament director Samuel Glover said Wednesday. "We couldn't have certain teams like Pine Bluff and [Little Rock] Parkview playing each other because they play during the season, so you have some AAA [Arkansas Activities Association] rules there. Then, you have to be considerate of the out-of-state teams. There are three teams from Texas, so they have rules to follow." Beaumont United, Fort Bend Hightower and Baytown's Goose Creek Memorial are all located within a 90-mile radius of Houston.

Glover said organizers had to balance out the brackets, taking into consideration push-back from recent years where local teams wanted to measure themselves against some of the nation's best.

Magnolia, which stars University of Arkansas signee Derrian Ford, was ranked No. 1 in Class 4A and made the state semifinals last season. The Panthers will start their King Cotton run against Missouri Class 5 champion St. Louis Cardinal Ritter, and Ford might get the chance to match up with Murray State University recruit and three-star shooting guard Braxton Stacker.

"Who wants to travel halfway across the country and play someone you play anyway?" Glover said.

There are also the comparable styles of play that helped King Cotton's competition committee pair teams.

"What we would consider the best matchups, we took that and considered the style of play," Glover said. "When you see a team like [Chicago] De La Salle vs. Goose Creek, that is on purpose. We look at the high-powered offense that Goose Creek runs, and [De La Salle Coach Gary] DeCesare always had that fast-paced offense. We felt like that was going to be the most exciting game." One potential championship game would not cause a conflict. Pine Bluff, a Class 5A team, and Watson Chapel, from Class 4A, haven't competed in the same conference in years.

The two teams are on opposite sides of the King Bracket. Pine Bluff would have to beat Antioch (Tenn.) Cane Ridge and get past either Class 6A champion North Little Rock or Shreveport Calvary Baptist Academy, while Watson Chapel would face a tall order in Texas 5A champion Beaumont United before playing either Mississippi 4A power Raymond or Christian Brothers.

The key to a good tournament, Pine Bluff Coach Billy Dixon said, is not knowing about the other teams.

"Right now, I'm just too focused on getting my guys where they need to be," said Dixon, whose Zebras are 4-4.

"It doesn't matter who you play, and just from the response I've gotten nationally of the teams in there, they say it's going to be some heck of a competition, which is what you want. If you're on a big stage, you want an opportunity to play those high-level teams and see how your guys stack up and how well they're going to perform." Pine Bluff and Parkview are longtime 5A contenders but do not compete in the same conference. The teams have already squared off twice, with Parkview winning 70-55 at home last Tuesday and 54-53 in overtime Saturday to win the Charles Ripley Holiday Tournament at Little Rock Southwest High.

The Zebras won't get another shot at revenge, because the Patriots are placed in the Creed Bracket, named after King Cotton founder Travis Creed.

"I'm not really concerned about the bracket as I am excited about the competition," Parkview Coach Scotty Thurman said.

"To me, it's all about getting a chance to play games and going up against teams you don't normally get to compete against. How the bracket is set up is really not that big of an interest to me."