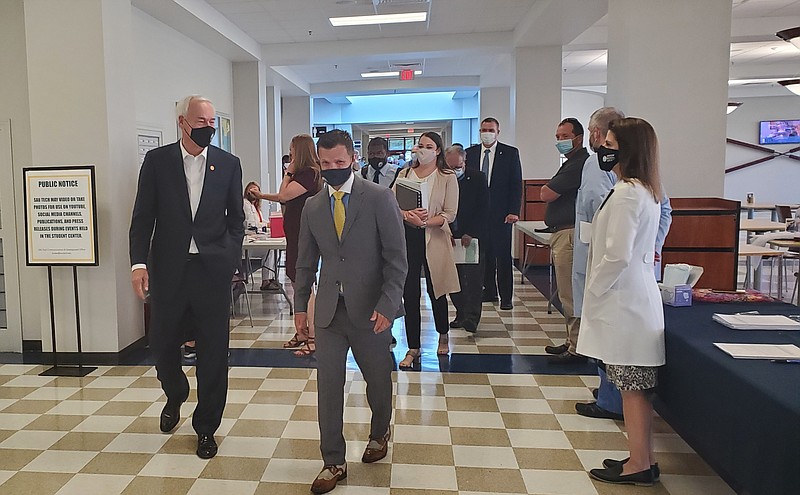 “The whole idea in these Community COVID Conversations is to have frank discussions, to hear from people and to raise questions hopefully we can try to answer. At least we’ll hear from each other,” Hutchinson said.

The first question was from Pastor Greg Nettles, who stated that even though he was vaccinated, he thought some people were hesitant to get the vaccine on the basis of not knowing the ingredients. He asked if there was a way to disseminate that information to the public.

Romero said the ingredients for the vaccines were listed on the United States Centers for Disease Control and Arkansas Department of Health websites. He also said steps could possibly be taken to leave literature at local health departments.

Another local resident in attendance cited that the majority of Arkansas had not taken the vaccine as of Thursday.

“I understand this is a very volatile issue. I have strong opposition to it. I’m opposed to it because there are very real dangers. It’s a genetic material exposed to your body,” he said.

He went on to cite a study in the New England Journal of Medicine that he said showed that pregnant women who took the vaccine had a miscarriage rate of 82%.

Smith responded, saying that the resident’s information was incorrect, that out of the 35,691 women in that study, only one in four miscarried, which is the average amount of miscarriages recorded in the U.S. even prior to the pandemic.

“All the data right now on pregnancy is very safe. There is actually data to show that women who are vaccinated in their third trimester, their babies have antibodies for COVID. Not only is the preliminary data (saying the vaccine is) safe in pregnancies, but it also suggests that mother will confer immunity to her new born infant,” she said.

Smith also noted that the vaccine does not contain DNA but mRNA, which degrades after 24 hours and never directly enters the nucleus of a cell.

When the same audience member questioned the governor about whether the state government would mandate vaccinations, Hutchinson said there would be no government mandate.

Likewise, Hutchinson was questioned later by the Camden News about a bill that is currently in committee in the state Legislature that would prohibit private companies from enforcing vaccine mandates.

An audience member expressed concern over the amount of nurses leaving the profession over mandatory COVID vaccinations and stated that it was “her body, her choice.”

Hutchinson noted that $97 million was allocated recently to help aid nurse retention in the state.

Later, Nancy Lott said that her daughter was a traveling nurse and had a different feeling about why nurses were leaving the profession.

“There’s two sides to that. My daughter is frustrated because she’s worked mostly COVID floors in Louisiana and Arkansas and a lot of the nurses are leaving, but they have the opposite issue. They are leaving because they are frustrated that people aren’t getting the vaccines. They feel like the majority of the patients she is seeing are unvaccinated, and some people that have cancer and OVERSET FOLLOWS:other things, can’t get a bed because they end up giving them to people who can’t get the vaccine,” Lott said.

Calhoun County Judge Floyd Nutt also noted that alternative treatments for COVID he’s heard of residents taking could be dangerous, and encouraged local residents to instead take the vaccine.

“I say this jokingly in a way, but in way it’s serious. If we could ban cattle wormer, people might take the vaccination, cause that’s what people in Calhoun County are doing, taking cattle wormer,” Nutt said. “I asked my son-in-law, he’s a doctor. Me and my wife were both hardheaded, we weren’t going to take the vaccine. I’ve heard everything from a chip being in it, the government was going to track you. Just this crazy stuff. Initially I did think it was political, but I found out it was real. It shut the country down… Me and my wife talked about it and we decided to take it. I think it’s safe. I talked to a lot of educated people a lot of smart people. I think it’s time for us to get vaccinated.”