Local WWI veteran to be buried at Arlington National Cemetery 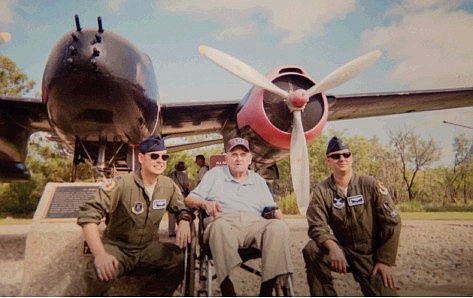 Robert ("Bob") Kehres, one of the oldest living residents of Magnolia, who passed away in 2016, will have his remains laid to rest at the Arlington National Cemetery Columbarium in Washington at 2 p.m. Friday, Aug. 27. Any guests should arrive 45 minutes earlier for clearance and procession line up. Kehres will be buried with military honors, including a firing party, bugler, and flag that will be folded and presented to the family.

The 103-year-old was a resident of Magnolia for nearly 80 years. He was married to his beloved wife, Dorothy "Dot" Kehres, until her passing in 2000.

Kehres was a World War II veteran and Army officer specializing in aircraft engineering. He served the entirety of America's involvement in the conflict, having volunteered just months after the Dec. 7, 1941, Japanese attack on Pearl Harbor. His war time service took him to from training grounds in the U.S. to the European Theatre and the Allied D-Day invasion of France in June 1944. He served from 1942 to 1947 in the Army Air Corps. He was part of missions in England, France, and Germany. He exited the military as a captain, then moved back to Magnolia.

He was also a devout Catholic and member of Immaculate Heart of Mary Catholic Church in Magnolia. He often played the piano during Mass.

As a Banner-News subscriber since 1948, Kehres was the subject of multiple newspaper pieces over the years. He appeared as a feature article subject in December 2015, just after celebrating his 100th birthday, and again in November 2018 as a 102-year-old who still attended military unit reunions across the country.

In the latter part of 1941, Kehres met his future wife Dorothy ("Dot") Beene on a blind date.

"She was a native of Magnolia, Arkansas, but was employed by an oil company in Tulsa, and she was home on vacation with her sister. One of these fellows I worked with up there knew them, and he drove us around, and I became infatuated with her," Kehres said.

For the next three decades, he worked in and around the Magnolia area as a petroleum engineer, retiring in 1976. In his post career, the spry 60-something became an avid sportsman -- especially talented in golf and an almost daily player. But when Dot passed away in 2000, the 85-year-old was no longer able to walk the course and swing the irons like he could in year's past. Thus began a slightly less physically demanding hobby and a rekindled interest in his World War II past.

Having only attended a few sporadic 416th Bomber Group reunions before, the former Douglas A-20 Havoc and A-26 Invader bomber aircraft engineer soon became a regular at the annual gatherings.

One of Kehres' more memorable trips involved a tour of Air Force One during a trip to the nation's capital. Through a connection, the former bomber group engineer was able to board the President's personal plane and see firsthand the pilot's viewpoint in the massive modified Boeing jet.

When asked about his service in the war, Kehres shies away from any perceptions of glory or admiration. He says the ones who truly deserve remembrance are the countless men that never came back home. The ones which gave their lives, pushing through the massive hedgerows in France, in order for his unit to set up camp there weeks later, and the men who did not return from treacherous bomber flights over allied territory.

"Those guys are the heroes, not me," he said. "I'm not looking for honor. I was just doing what the government told me," he said.