Takers ebb, state plans to dial back on vaccines 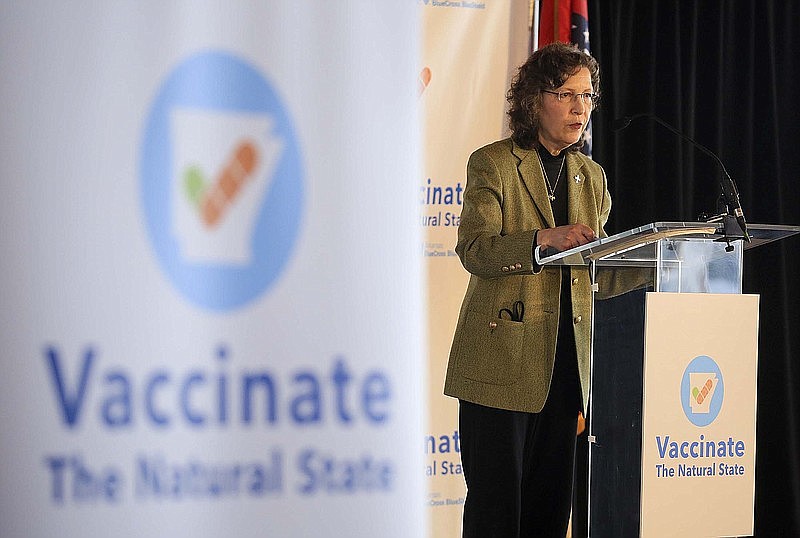 Dr. Jennifer Dillaha, State Epidemiologist with the Arkansas Department of Health, speaks Monday Feb. 22, 2021 in Little Rock during a press conference to announce a new initiative to educate Arkansans on the benefits of the Covid-19 vaccine. The initiative is led by Arkansas Blue Cross and Blue Shield, in collaboration with the Arkansas Department of Health, Arkansas Foundation for Medical Care, Arkansas Minority Health Commission, Arkansas State Chamber of Commerce/Associated Industries of Arkansas, Northwest Arkansas Council, UAMS and Walmart. (Arkansas Democrat-Gazette/Staton Breidenthal)

As the pace of coronavirus vaccinations in Arkansas continues to show signs of slowing, a state official said Wednesday that Arkansas likely will order less than its full allocation of vaccine from the federal government next week for the second week in a row.

“I don’t think that we will” order the full allocation, state Epidemiologist Jennifer Dillaha said.

“I think we still have a pretty good stockpile of vaccine in Arkansas, and we would prefer to use that first before adding to it, or at least diminish it to some degree.”

Meanwhile, the state count of coronavirus cases rose Wednesday by 291 — the first daily increase in four days that was smaller than the one a week earlier.

After falling by 13 Tuesday, the number of people hospitalized in the state with covid-19 rose Wednesday by eight, to 165.

The death toll from the virus, as tracked by the state Department of Health, rose by one, to 5,726.

In a statement, Gov. Asa Hutchinson noted that the 1,908 cases in the state that were considered active, while higher than the previous day, were down from the 1,943 that were active the previous Wednesday.

“Our vaccination efforts continue as we have doses of all three vaccines available in every county. These vaccines are safe, effective and offer us the best path forward toward the end of this pandemic.”

According to the Health Department, the total number of vaccine doses that have been administered in the state, including second doses of the Pfizer and Moderna vaccines, grew Wednesday by 18,224.

That was down by almost 2,500 doses from the daily increase a week earlier.

The average number of doses administered each day over a rolling seven-day period fell by about 350, to just over 14,440.

That average has mostly fallen since peaking at about 23,000 a day during the week ending April 7.

With the state’s vaccine supply exceeding the demand, Arkansas last week for the first time ordered significantly less than its weekly allocation of vaccine from the federal government.