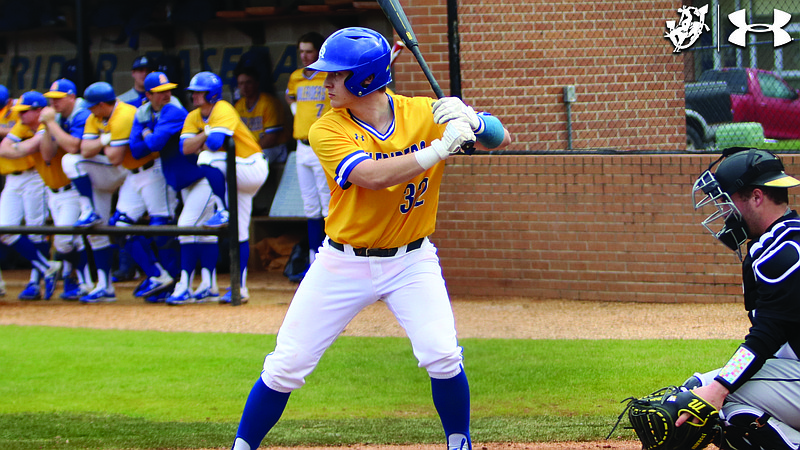 Southern Arkansas’ Brett McGee connects at the plate during a recent game. He was named the GAC Player of the Week for his efforts on the diamond last week. (SAU Sports)

The Great American Conference announced its weekly baseball awards, and for the second time this season, the Muleriders’ Brett McGee is the conference’s player of the week.

The catcher from Pittsburg, Texas filled up the stat sheet in the Muleriders’ four games this past week, which included three games for the Muleriders’ offense scoring 10 or more runs, including 17 against No. 24 UT-Tyler and 16 and 13 in their three-game series versus Southern Nazarene.

For the week, McGee owned a .533 batting average with two doubles, three homeruns and 11 RBIs, in addition to drawing four walks. His on-base percentage was .632 and he slugged 1.267.

In the midweek matchup against the Patriots, the southpaw hit a grand slam to give the Muleriders the lead early on; he later added a two-RBI double in the eighth inning.

In the weekend series versus the Crimson Storm, the sophomore went 6-10 from the plate. He started the scoring off in game one with an infield single, driving in a run before he hit a solo homerun in the eighth inning.

Game two saw McGee hit a 2-RBI double, and he led the scoring off in the series finale with a solo homerun in the second inning.

This is the 27th time a Mulerider has been named GAC Player of the Week and the eighth position player (12th overall) to receive the award under head coach Justin Pettigrew. Additionally, this is McGee’s third conference weekly award, the second-most for a Mulerider position player in the GAC era, only behind Trevor Rucker (five).

McGee and the Muleriders close their home regular season schedule this weekend when they host rivals Arkansas-Monticello in a three-game conference series.