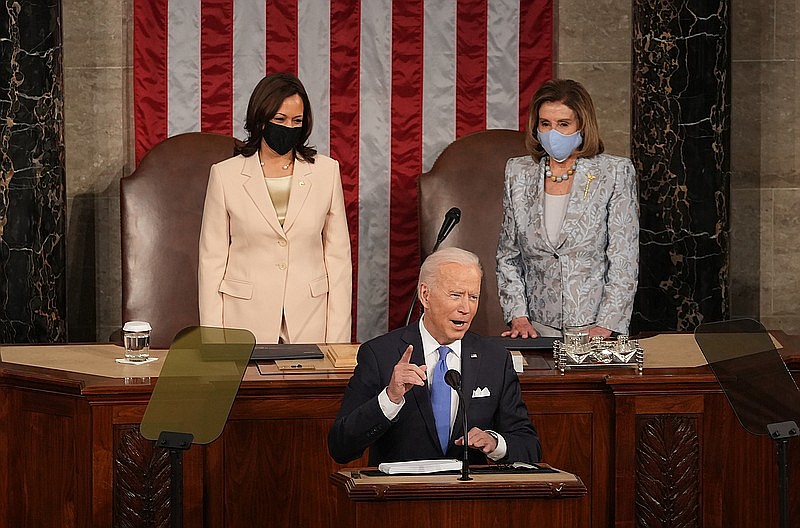 WASHINGTON — President Joe Biden declared Wednesday night in his first address to a joint session of Congress that “America is rising anew,” pointing to the nation’s emergence from the pandemic as a vital moment to rebuild the U.S. economy and transform the roles the government plays in American life.

Biden marked his first 100 days in office as the nation pushes out of a series of crises, making his case before a pared-down gathering of mask-wearing legislators because of pandemic restrictions. Speaking in personal terms while demanding structural changes, the president urged a $1.8 trillion investment in children, families and education to help rebuild the economy and compete with rising global competitors.

The speech took place in a setting unlike that of any other presidential address at the familiar venue. The U.S. Capitol is still surrounded by fencing after insurrectionists in January protested Biden’s election by breaching the building and moving to the doors of the House chamber, where the president gave his address Wednesday. The nationally televised ritual of a president standing before Congress for the first time was one of the most watched moments of Biden’s presidency, raising the stakes as he tries to sell his plans to voters of both parties, even if Republican lawmakers prove resistant.

“America is ready for takeoff. We are working again, dreaming again, discovering again. Leading the world again. We have shown each other and the world: There is no quit in America,” Biden said.

“I can report to the nation: America is on the move again,” he said. “Turning peril into possibility, crisis into opportunity, setback into strength.”

This year’s scene at the front of the House chamber had a historic look: For the first time, a female vice president, Kamala Harris, was seated behind the chief executive. And she was next to another woman, House Speaker Nancy Pelosi, D-Calif.

The first ovation came as Biden greeted “Madam Vice President.” He added, “No president has ever said those words from this podium, and it’s about time.”

The scene was familiar yet strange, with members of Congress spread out. Chief Justice John Roberts Jr. was the sole member of the Supreme Court in attendance. Just two members of Biden’s Cabinet — Secretary of State Antony Blinken and Defense Secretary Lloyd Austin — were present, and Gen. Mark Milley, chairman of the Joint Chiefs of Staff, represented the military. Jill Biden was in attendance but without the first lady’s box that typically includes guests to be mentioned by the president during the speech.

“I have never been more confident or more optimistic about America,” Joe Biden said. “We have stared into an abyss of insurrection and autocracy — of pandemic and pain — and ‘We the People’ did not flinch.”

Biden repeatedly hammered home how he believes his plans would put Americans back to work, restoring the millions of jobs lost to the virus. He laid out a proposal for universal preschool, two years of free community college, $225 billion for child care and monthly payments of at least $250 to parents. His ideas target frailties that were uncovered by the pandemic, and he argues that economic growth will best come from taxing the rich to help the middle class and the poor.

For Biden, his speech also provided an update on combating the covid-19 crisis he was elected to tame, showcasing hundreds of millions of vaccinations and relief checks delivered to help offset the devastation wrought by a virus that has killed more than 573,000 people in the United States.

He also championed his $2.3 trillion infrastructure plan, a significant figure that would be financed by higher taxes on corporations.

Biden appealed directly to blue-collar workers, telling Americans that his infrastructure proposal would help “millions of people get back to their jobs and their careers.” Biden emphasized blue-collar roles as he outlined the plan, saying it would create jobs in modernizing America’s roads, bridges and highways and in replacing the nation’s lead pipes.

He said his plan would provide opportunities for engineers, construction workers, electrical workers and farmers, and he promised the plan would create “jobs Americans can raise their families on.”

That appeal to blue-collar workers has shaped Biden’s political career. He made a pitch to moderate, rural white voters as a centerpiece of his 2020 campaign.

Biden also was addressing an issue rarely confronted by an American president, namely that in order to compete with autocracies such as China, the nation needs “to prove that democracy still works.” The focus on the issue comes after his predecessor’s claims of election fraud and the ensuing attack on the U.S. Capitol.

In his first three months in office, Biden has signed a $1.9 trillion covid-19 relief bill — passed without a single GOP vote — and has shepherded direct payments of $1,400 per person to more than 160 million households. Hundreds of billions of dollars in aid will soon arrive for state and local governments, enough money that some forecast overall U.S. growth this year could eclipse 6% — a level not seen since 1984. Administration officials are betting that it will be enough to bring back by next year all 8.4 million jobs lost to the pandemic.

A significant amount of funding proposed Wednesday would ensure that eligible families receive at least $250 monthly per child through 2025, extending the enhanced tax credit that was part of Biden’s covid-19 aid. There would be more than $400 billion for subsidized child care and free preschool for all 3- and 4-year-olds.

A combined $425 billion would go to permanently reduce health insurance premiums for people who receive coverage through the Patient Protection and Affordable Care Act, as well a national paid family and medical leave program. Further spending would be directed toward Pell Grants, toward historically Black and tribal institutions, and toward allowing people to attend community college tuition-free for two years.

Funding all of this would involve a series of tax increases on the wealthy that would raise about $1.5 trillion over a decade.

Biden said in his address that he’s “not looking to punish anybody” but does plan to raise taxes on the wealthiest Americans.

The president wasn’t shy about saying that he’d pay for his $1.8 trillion spending package by raising taxes on the rich. He criticized the Republican-backed 2017 tax cuts, saying they created large deficits while mostly benefiting the richest Americans.

He said his plan would most help the middle class, and he pledged not to raise taxes on those Americans.

Sen. Tim Scott of South Carolina, the Senate’s only Black Republican, was tapped to give the GOP response to Biden’s speech. In the hours leading up to the address, other Republicans tagged Biden’s agenda as out of the mainstream and criticized him for not doing more to work with their party.

Senate Minority Leader Mitch McConnell, R-Ky., said in a Senate floor speech that Biden and his administration were more interested in offering “catnip for their liberal base” than pursuing promised unity.

“Back in January, many Americans hoped they could take the incoming president at his word,” McConnell said. “The first 100 days have left much to be desired.”

Biden also used his address to touch on the broader national reckoning over race in America, saying the United States has “to come together to rebuild trust between law enforcement and the people they serve.”

He called on lawmakers to pass police overhaul legislation by the May 25 anniversary of the death of George Floyd. Biden mentioned the legislation in his speech and said that “the country supports this reform, and Congress should act.” The House has passed the overhaul of policing and law enforcement, but it has yet to clear the Senate.

“We have a real chance to root out systemic racism,” Biden said.

The president also called for bipartisan action in Congress on fighting gun violence.

Biden outlined a number of what he called “reasonable reforms.” Examples include universal background checks and banning assault weapons and high-capacity magazines, which he said “have overwhelming support from the American people.”

Biden also had a message for gun-rights advocates who say that those kinds of restrictions would impinge upon their constitutional rights. “We’re not changing the Constitution; we’re being reasonable,” he said.

Biden ended his first address to the joint session of Congress by reaching to evoke the sweep of history. He said the notion of “we the people” is actually “the government, you and I.”

He concluded by saying that as the country begins to confront a new chapter against the pandemic, “There is not a single thing, nothing, nothing beyond our capacity. We can do whatever we set our minds to it as long as we do it together.”

Information for this article was contributed by Jonathan Lemire, Josh Boak, Darlene Superville, Michael Tackett and staff members of The Associated Press; and by Matt Viser and Tyler Pager of The Washington Post.