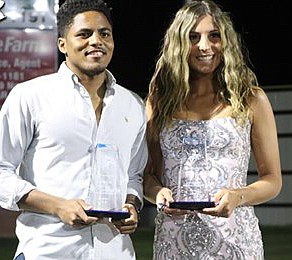 Southern Arkansas standout athletes Aaron Lucas (left) and Victoria Taylor were the big winners during Monday’s Mulespy Awards which is put on by the university’s athletic department. (SAU Sports)

The player of the year awards are given to the top Male and Female Athlete in a given year at SAU regardless of classification and that possesses conduct that has been a positive influence for good, and exemplifies the ideals of Auburn Smith and Dr. Margaret Downing; each an SAU Sports Hall of Famer that left an indelible mark on Mulerider Athletics during their storied tenures at the university.

For their outstanding academic achievement, extracurricular involvement and athletic ability, the Murphy USA Male and Female Scholar-Athlete of the Year awards were presented to basketball senior forward Charlie Thomas and cross country senior Carley Hale, respectively. Hale becomes the first two-time winner of the award after receiving the honor in 2018-2019.

Both student-athletes were members of the inaugural induction class of the SAU Chapter of Chi Alpha Sigma; the first, and only, national scholar-athlete society to honor four-year collegiate student-athletes who have excelled in both the classroom and in athletic competition. In all, twenty-two student-athletes were a part of the ceremony that took place following the handing out of the Murphy USA Scholar-Athlete of the Year awards.

Lucas, a senior point guard from Tulsa, OK, helped engineer one of the most highly-decorated seasons in Southern Arkansas’ NCAA history both individually and from a team standpoint. He was the first GAC Men’s Basketball player to be named the league’s Player of the Year and Defensive Player of the Year in the same season. He was also an Honorable Mention All-American.

Taylor, a native of Greenwood is putting the finishing touches on a storied career as one of the most dominant pitchers in both Mulerider Softball and Great American Conference history. This spring, Taylor became one of just three pitchers in GAC history to eclipse 700 career strikeouts, while also setting the GAC career records for most wins with 76 and for most shutouts with 23.