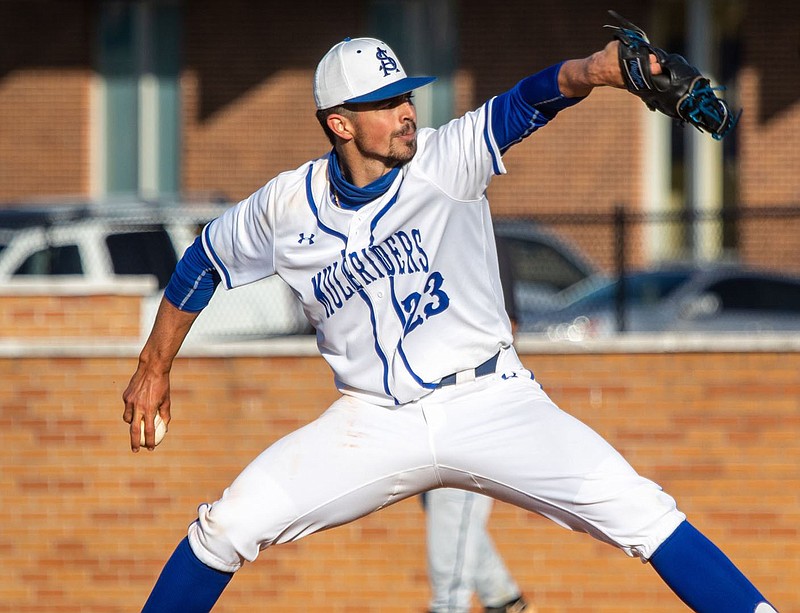 SAU’s Zach Smith pitches on the mound during GAC baseball action. In the opener against Southern Nazarene over the weekend, Smith went the distance and led the Muleriders to a 6-2 victory. (SAU Sports)

Southern Arkansas moved back into the win column over the weekend as they swept Southern Nazarene in Great American Conference baseball action.

The Muleriders, now with a two-game lead in the GAC standings, will host Arkansas-Monticello Friday and Saturday at Goodheat Field.

In the opener against the Crinson Storm, the Muleriders won 6-2 . Senior starter Zach Smith went the distance on the mound as he struck out a dozen, scattered eight hits and allowed just two runs, while the Muleriders collected ten hits and pushed across a combined four runs in the final three innings to break a 2-2 tie.

Smith walked only two batters and just one of the two runs allowed was earned as he picked up his fourth win of the season. In the final four innings, only one batter reached base and Smith recorded a half dozen of his strikeouts. He faced 35 batters and used eight groundouts and five fly outs along with his dozen punch outs to dismiss the Crimson Storm on Saturday.

In Sunday’s doubleheader, which the Muleriders won by scores of 16-2 and 13-2, SAU recorded 30 hits, 20 of which went for extra bases and included eight home runs, and plated 29 runs. Sophomore pitcher Jacob Womack strike out a career-high 13 batters in six innings of work to remain unbeaten on the season at 6-0.

A seven-run third inning highlighted by a two-run double from the bat of junior Jacob Martinez and a three-run home run by sophomore Mason Peterson backed Womack’s start. The Muleriders added three more runs in the top of the fifth inning as an RBI single from Martinez and a two-run double by sophomore Brett McGee helped push the Mulerider lead to 10-1.

After a single run scored in the sixth inning, SAU put the game out of reach in the seventh with a five run frame that included home runs by sophomores Conner Allen and Riley Orr.

Womack faced 24 batters on Sunday and allowed just five hits, one walk and single run. He used three groundouts and a pair of fly outs to turn away the Crimson Storm offensively. Junior Reed Osborn worked the seventh with one hit, one walk, one run and a strikeout to close out the game.

In the finale, the offensive onslaught. McGee homered in the second inning for the game’s first run and Peterson followed with an RBI double to make it 2-0 in favor of Mulerider sophomore starter Remy Bilodeau. Senior Zach Muldoon left the yard in the home half of the third inning, a two-run blast that highlighted the four-run frame.

The Muleriders struck for four more runs in the sixth with Ty Manning’s three-run blast pushing SAU out front 11-2. In the seventh, freshman Chris Sutton and senior Kobe Morris each connected on solo home runs to round out scoring.

Bilodeau worked 6.0 innings, scattered six hits and allowed just a single earned run. He struck out four and walked only one. Freshman Brandon Gonzalez tossed the final frame picking up a strikeout as he faced the minimum.

This weekend home finale series against the Boll Weevils starts with Friday’s opener scheduled for 6 p.m. Saturday’s doubleheader is slated for a 2 p.m. start with senior day festivities taking place prior around 1:40 p.m.