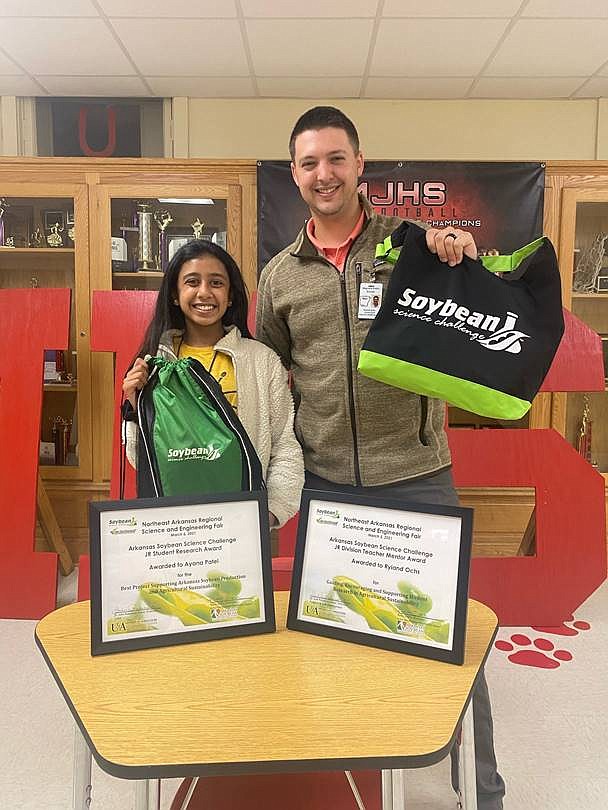 Magnolia Middle School (MMS) student Ayana Patel was notified on March 5 that she was selected as the Junior Division Research winner of the Arkansas Soybean Science Challenge. The sixth-grade student had spent months developing her local science fair project, GOT OXYGEN? In this plant-based experiment, Ayana wanted to see which type of leaf released the most oxygen in 2 hours. The judges of the science fair were so impressed with Ayana’s work that they recommended it be entered into the Soybean Science Challenge. The Challenge is directed by the University of Arkansas Division of Agriculture Research and Extension in connection with the Arkansas Soybean Promotion Board.

Ayana soon heard that she had been chosen as the Junior Division Research winner and would receive a box of gifts and a 200-dollar cash prize upon the completion of a soybean course though the college. Ayana did complete the course, which covered all things soybeans and included many sections and exams.

The Soybean Challenge is a farmer-funded, statewide, high school education program that seeks to increase student knowledge about the value of Arkansas soybeans to the Arkansas economy, to the labor force, and ultimately to feed and fuel the world.