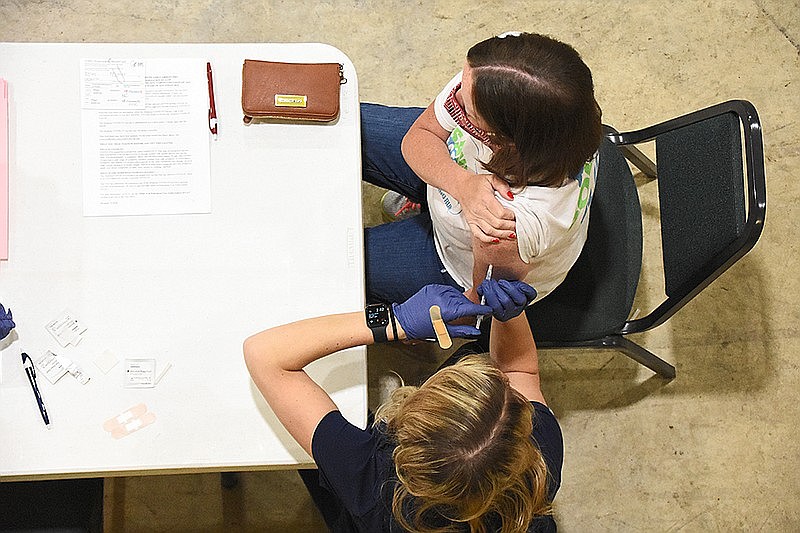 The proportion of Arkansans who have been fully vaccinated against the coronavirus topped 20% Thursday, while the state’s count of cases rose by 283, the biggest one-day rise in three weeks.

Meanwhile, the number of cases that were considered active rose above 1,800 for the first time this month as new cases continued to outpace recoveries.

The state’s death toll from the virus, as tracked by the state Department of Health, rose by six, to 5,686.

The vaccination milestone came two days after the state followed a federal recommendation to pause the administration of the single-shot Johnson & Johnson vaccine after reports that six women outside Arkansas had developed rare blood clots after receiving it.

Immunizations have continued using the two-dose Pfizer and Moderna vaccines.

“Even with the pause on the J&J vaccine, we were able to pivot and vaccinate over 25,000 Arkansans yesterday,” Gov Asa Hutchinson said in a statement.

“When the new COVID-19 cases go up, it is a reminder we must get our shot in the arm.”

The number of people hospitalized in the state with covid-19 rose by two, to 153, the second daily increase in a row.

Also Thursday, state lawmakers voted to do away with another safeguard against the coronavirus: the plastic-glass barriers that have separated the members’ desks since the beginning of this year’s legislative session.

The votes came after legislators last month lifted requirements for lawmakers, staffers and others to wear masks.

According to the U.S. Centers for Disease Control and Prevention, the number of Arkansans who are fully vaccinated, meaning they received one dose of Johnson & Johnson or two doses of Pfizer or Moderna vaccines, rose by 15,925, to 606,113, or about 20.1% of the state’s population.

Among the states and District of Columbia, Arkansas continued to rank 43rd in the percentage of its residents who had received at least one vaccine dose and 47th in the percentage who had been fully vaccinated.

Nationally, 37.9% of people had received at least one vaccine dose and 23.6% had been fully vaccinated.

Even before the Johnson & Johnson vaccinations were halted, the pace of vaccinations in Arkansas had begun slowing.

According to Health Department figures, an average of about 21,300 doses per day were administered in the seven-day span ending Thursday, down from a peak of just over 23,000 a day in the week ending April 7.

Those doses include second shots of the Pfizer and Moderna vaccines.

In Benton County, appointment slots for a weekly Pfizer vaccine clinic at the county fairgrounds in Bentonville went unfilled Wednesday for the first time since the clinics began two weeks ago.

County Emergency Management Director Michael Waddle said just 600 of the 1,000 slots were filled, and some who made appointments didn’t show up.

“Unfortunately, it wasn’t as good as the previous ones,” Waddle said.

Even after walk-in hours were added, the clinic ended up giving shots to only a total of 560 people.

Waddle attributed the lower turnout to the growing number of providers offering the vaccines and the shrinking number of people eager to get them.

“I’m kind of hoping that will cause people that were kind of on the fence waiting for Johnson & Johnson just to get off that fence and at least go get something,” Waddle said.

Those teams had been using Johnson & Johnson, she said.

She said the state will also send 10,000 Pfizer doses to Health Department local health units to work with schools on vaccinating 16- and 17-year-olds.

Younger children are not yet allowed to receive the shots, although Pfizer has applied to the U.S. Food and Drug Administration for authorization for the vaccine to be used on children ages 12-15.

In the Senate, lawmakers burst in a smattering of applause after Senate President Pro Tempore Jimmy Hickey, R-Texarkana, introduced a motion to remove the chamber’s plastic-glass barriers.

After a voice vote without opposition, Lt. Gov. Tim Griffin, who presides over the Senate, declared that the “plexiglass has been defeated.”

A similar motion from Rep. Carlton Wing, R-North Little Rock, was met in the House with cheers and applause.

Some members had removed the barriers themselves in recent weeks, complaining about the difficulty in communicating with their colleagues.

The measure was approved in a divided voice vote.

House Speaker Matthew Shepherd, R-El Dorado, urged lawmakers to wait for the staff to remove the dividers after adjournment.

“This is not like the Berlin Wall. Do not take the plexiglass with you,” Shepherd said.

Lawmakers voted to lift both chambers’ mask requirements on March 30, the same day Hutchinson lifted the statewide mask mandate he had imposed in July.

Dillaha said she was disappointed by the increases Thursday in active cases and hospitalizations.

“It’s not alarming in terms of the amount, it’s just disconcerting to see it start gradually moving in the wrong direction,” she said.

She said she suspects the increase is linked to faster-spreading coronavirus variants.

“It’s too soon to tell how much of that is driving it, but it seems to me that it has to be playing at least some role in it,” Dillaha said.

The variant from the United Kingdom, which is thought to be more lethal as well as more transmissible than other types of the virus, has been identified in Benton, Crawford, Greene, Hot Spring and Jefferson counties, she said.

Benton and Crawford counties have also had cases that were identified as variants from California, and Benton County has had one confirmed case of the Brazil variant.

Benton and Miller counties each have had a total of five identified variant cases. The other 12 counties have had fewer than five.

The total number of cases caused by variants in the state is unknown because only a small percentage of specimens are sent to laboratories that perform the genomic sequencing required to determine that.

Dillaha said the Health Department sends samples to the CDC for sequencing when it learns of people who were infected after being vaccinated or recovering from a previous infection.

“We also look for clusters, because we feel that clusters may be more likely to be caused by variants that are easily spread,” she said.

The CDC also conducts other sequencing on specimens from across the country as part of a national surveillance program.

Dillaha said she didn’t have information Thursday on the number of specimens from Arkansas that have been sequenced.

“What we are gathering is really just to identify that the variant is present,” Dillaha said. “It’s not a systematic surveillance to see how much is present.”

“Once it’s in the state, we assume it could be anywhere in the state,” she added. “Just because it’s not been identified in a county doesn’t mean it’s not there.”

Thursday’s increase in cases was the biggest since Thursday, March 25, when the number rose by 334.

After falling Wednesday, the average number of cases added to the state’s tallies over a rolling seven-day period rose by 12, to 178, its highest level since March 29.

The number of cases that were considered active rose by 128, to 1,843, its highest level since March 28.

After rising for the previous two days, however, the number of the state’s virus patients who were on ventilators fell by two, to 18.

The cases that were added to the state’s tallies Thursday included 216 that were confirmed through polymerase chain reaction, or PCR, tests.

The other 67 were “probable” cases, which include those identified through less-sensitive antigen tests.

The state’s cumulative count of state cases rose to 332,949.

Among prison and jail inmates, the Health Department’s count of cases rose by eight.

Department of Corrections spokeswoman Cindy Murphy said the state prison system had nine new cases at the Ouachita River Unit in Malvern, two at the McPherson Unit near Newport and one at the Northeast Arkansas Community Correction Center in Osceola.

Of those prisons, the Malvern lockup had the largest number of cases that were active, 45, followed by the McPherson Unit, which had five.

The Osceola facility had one active case.

Among nursing home and assisted living facility residents, the state’s count of virus deaths rose by one, to 2,068.

The number of the state’s virus patients who have ever been on ventilator with covid-19 rose by one, to 1,599.

Information for this article was contributed by Rachel Herzog and Neal Earley of the Arkansas Democrat-Gazette.