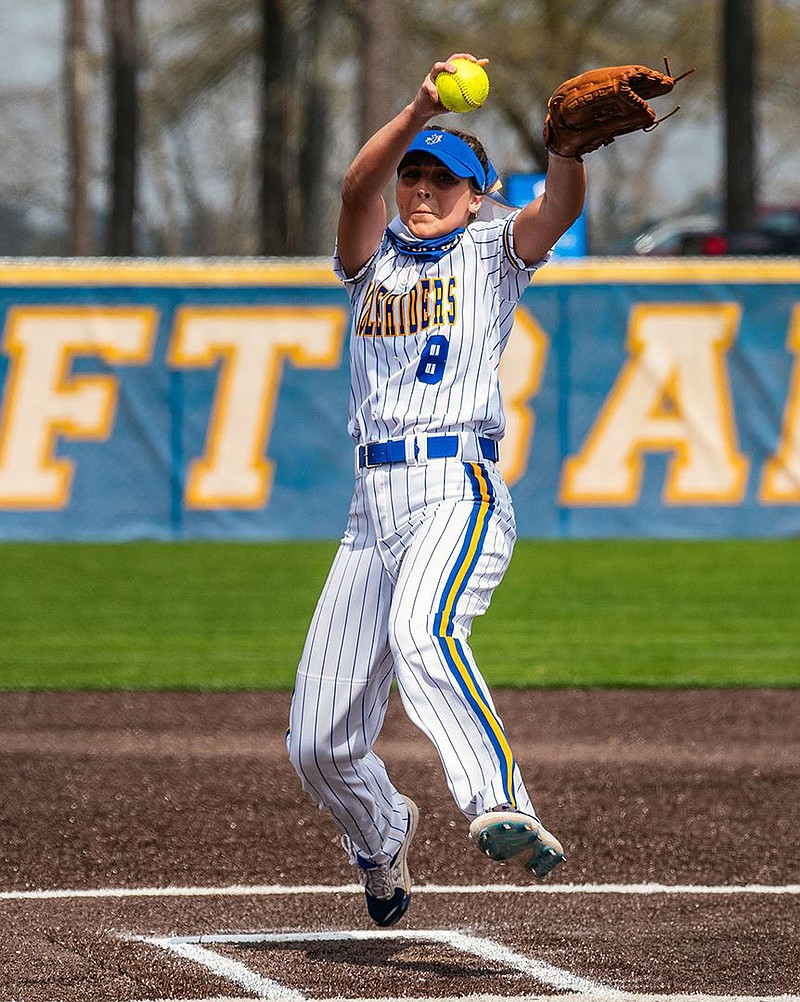 Pitcher Victoria Taylor throws in the circle for the Lady Muleriders, who will play a nonconference game at Arkansas-Monticello today at 4 p.m.

The SAU Lady Muleriders returned to their winning ways over the weekend by sweeping Henderson State in a three-game series by a combined score of 31-3. They won by scores of 12-3, 7-0 and 12-0.

During the 12-0 shutout, the Lady Muleriders pushed across three runs in the bottom of the first. Jaxynn Dyson led the inning off with a walk and scored on a Laina Suesue double. Faith Otts would single to put runners on the corners and Elisa Favela would ground into a fielder’s choice to score the second run.

A two-out double by Christina Hill, one of two doubles for her on the day, would tally another run for the Lady Muleriders.

Favela, who also started in the circle for the first time this season, struck out the side in the top of the second and the Lady Muleriders would push the final nine runs they would score across in the second inning.

Makana Morton and Dyson singled to set up Suesue, who singled in Morton. Otts would draw a walk to load the bases before Favela would drive a run in on an infield single that went off the Lady Reddies pitcher’s glove.

Alese Casper singled in a run and Hill drove in a pair of runs on a double. A Lady Reddies pitching change led to Casper scoring on the next batter after the Lady Reddies catcher overthrew their pitcher, causing the ball to go into centerfield.

Hill advanced to third on a Sarah Evans flyout before scoring on a Maeson Grace RBI single.

The scoring would be capped by Morton, who left the yard for the first time in her Lady Mulerider career to make the final score 12-0.

Favela picked up her first win of the season, striking out six and allowing only two hits in three innings of work. Landry Newgent worked in relief for the second game in a row, throwing two hitless innings and striking out two.