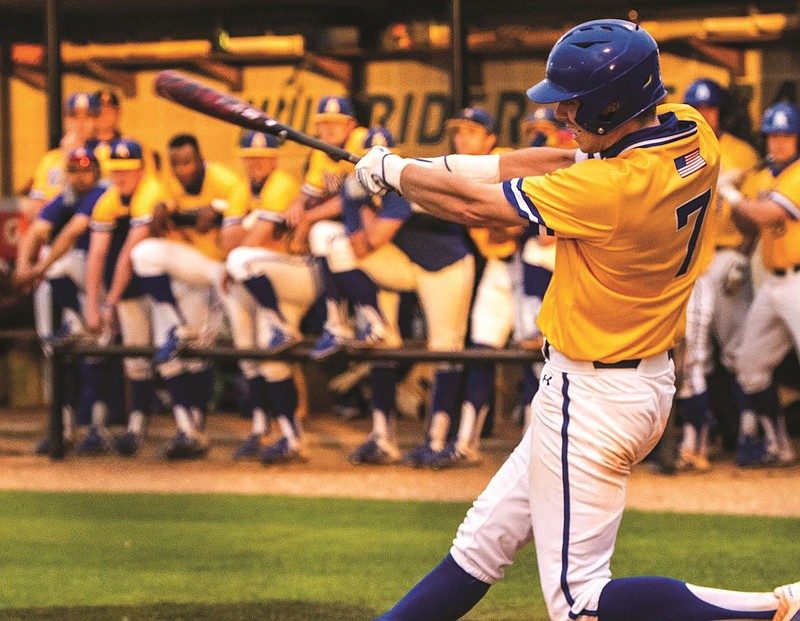 SAU’s Kobe Morris takes a hard swing during GAC baseball action. He and the 25th-ranked Muleriders will take on Delta State at 5 p.m. today in Cleveland, MS.

Southern Arkansas will be in Mississippi today for against longtime Gulf South Conference rival Delta State. First pitch in Cleveland is scheduled for 5 p.m.

The 25th-ranked Muleriders took 2-1 GAC series over Henderson State over the weekend. On Friday, they overcame a five-run deficit to win 9-6.

Senior Kobe Morris pushed his hitting streak to 19 games as SAU had a dozen hits. The Muleriders’ win streak improved to nine games and SAU has won 12 of its past 13 games as the club’s overall record moves to 15-6 with a 12-4 mark in league play.

On Saturday, Southern Arkansas sophomore right hander Jacob Womack went 6.1 innings in the opener against the Reddies as he scattered seven hits with one earned run, but the Muleriders were edged by the Reddies 3-2 which snapped SAU’s nine-game winning streak and evened the series. However, Southern Arkansas bounced back in the finale with a six-run first inning to win 8-5.

The Muleriders led 2-0 heading into the stretch of game one as a sacrifice fly from Morris plated senior Austin Baker, who reached on a triple in the third inning, and an RBI single from the latter that scored sophomore Ty Manning. HSU struck for three runs in the home half of the seventh and that lead would hold for the Reddies as the Muleriders were unable to tie the game in the ninth with runners at the corners and one out. The loss was just the second in the past 14 games for SAU.

Peterson added the team’s seventh run in the third inning as a groundout chased home Manning. The final run came courtesy of sophomore Brett McGee who left the yard in the fifth inning with a solo shot to right centerfield; his seventh of the season. Bilodeau worked around eight hits and five runs to fan five with two walks as he improved to 2-0 with a complete game effort in the seven-inning contest.

After today’s game against the Statesmen, the Muleriders return to league play when they host Harding Friday and Saturday.