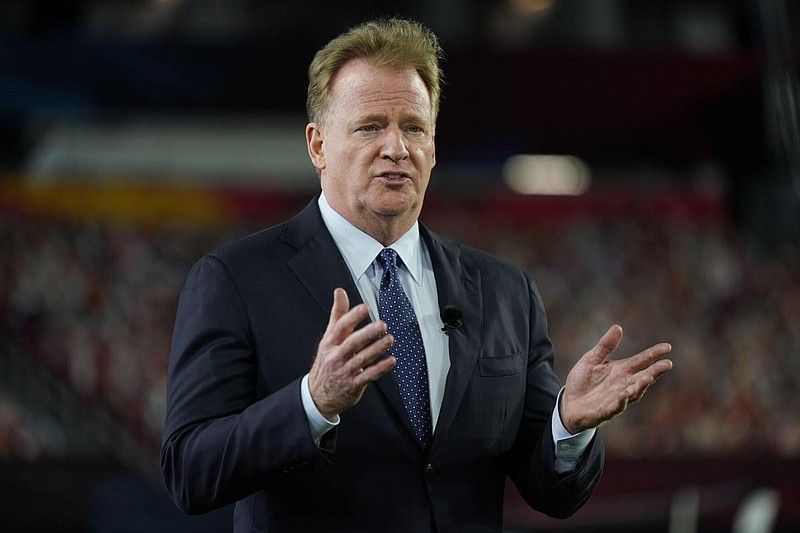 Commissioner Roger Goodell gestures during the NFL Honors ceremony as part of Super Bowl 55 in Tampa, Fla. The NFL is increasing the regular season to 17 games, as expected, and reducing the preseason to three games. Team approved the 17th game, marking the first time in 43 years the regular season has been increased. (AP Photo/Charlie Riedel)

The NFL is increasing the regular season to 17 games and planning to have full stadiums for those games.

While reducing the preseason to three games the league will be able to generate additional revenue, of course. America’s most popular sport also will provide more content for the broadcast partners who soon will be spending a total of about $10 billion a year on rights fees.

Team owners approved the 17th game as expected, marking the first time in 43 years the regular season has been increased. It went from 14 to 16 games in 1978.

The Super Bowl now will move back a week to Feb. 13, which places it directly in the middle of the Winter Olympics in Beijing. Coincidentally, NBC has the broadcast rights to both.

Each extra NFL game will be an interconference matchup based on where teams finished in the previous season. AFC teams will be hosting the 17th game in 2021.

Beyond next season, the league plans for some of the extra games to be played at international sites, with regular hosts London and Mexico City possibly joined by other venues.

“This is a monumental moment in NFL history,” NFL Commissioner Roger Goodell said. “The CBA with the players and the recently completed media agreements provide the foundation for us to enhance the quality of the NFL experience for our fans. And one of the benefits of each team playing 17 regular-season games is the ability for us to continue to grow our game around the world.”

Some players have voiced their unhappiness with the expanded regular season, but Goodell and other league executives point out that data accumulated over the past decade or so show more injuries occur in a preseason game than any other. Also as part of the labor agreement, the players now will receive 48.5% of shareable revenues with a 17th game, up from 47% last season.

This year, the AFC East will host the NFC East in Week 17, with Washington at Buffalo, the New York Giants at Miami, Dallas at New England and Philadelphia at the New York Jets.

The NFC West teams will visit AFC North clubs, with Seattle at Pittsburgh, the Los Angeles Rams at Baltimore, Arizona at Cleveland and San Francisco at Cincinnati.

NFC South members go to the AFC South, so New Orleans will be at Tennessee, Super Bowl champion Tampa Bay at Indianapolis, Carolina at Houston and Atlanta at Jacksonville.

For NFC North clubs, Green Bay goes to Kansas City for a juicy matchup of Aaron Rodgers and Patrick Mahomes, while Chicago is at Las Vegas, Minnesota at the Los Angeles Chargers and Detroit at Denver.

The full schedule will be released in May, but the Buccaneers will kick off the season on Thursday, Sept. 9. The regular season will end Jan. 9.

As for fans in the stands — 119 games, including the postseason, had some in-person attendance during the coronavirus-impacted 2020 season, with approximately 1.2 millions fans in total — Goodell sounded optimistic.

“We’re discussing plans to welcome back all fans across the country at all stadiums,” he said. “All of us want to see every one of our fans back. Football is not the same without fans, and we expect to have full stadiums in the upcoming season.”

The Super Bowl will be played in Los Angeles at SoFi Stadium.

“We have been in constant communication with our partners about this change, and we’re excited for the unprecedented opportunity of presenting the American audience with the two biggest events in media simultaneously,” NBC said in a statement. “We will promote the Super Bowl during the first week of the Winter Olympics, and we’ll promote the second week of the Winter Olympics during the Super Bowl. It’s a win for us, our partners, advertisers, and certainly viewers.”

Last season, the league added two playoff teams to increase the number of postseason games. Now, it is adding 16 more matches, or “inventory,” as league executives often refer to it.

— The 32 franchises were told that organized team activities (OTAs) will begin April 19, with COVID-19 protocols in place. The early launch of OTAs afforded to teams with new head coaches has been waived this year.

Specifics on other offseason programs, including minicamps and the opening of training camps, are being discussed by the league and union.

— Dr. Allen Sills, the NFL’s medical director who oversaw the COVID-19 response and protocols that helped the league play every game last season, updated the teams. Goodell said Sills and his staff are dealing “primarily in the area of education and trying to make sure not to just educate players but all our personnel on the importance of vaccinations — the fact it does help protect you from getting COVID and spreading COVID.”

“We will be encouraging all personnel to get vaccinated and working with the players association on all these issues. … We are also using our platforms publicly to talk about the importance of getting vaccinations.”

The NFL doesn’t plan to mandate vaccinations for players, coaches or staff members.