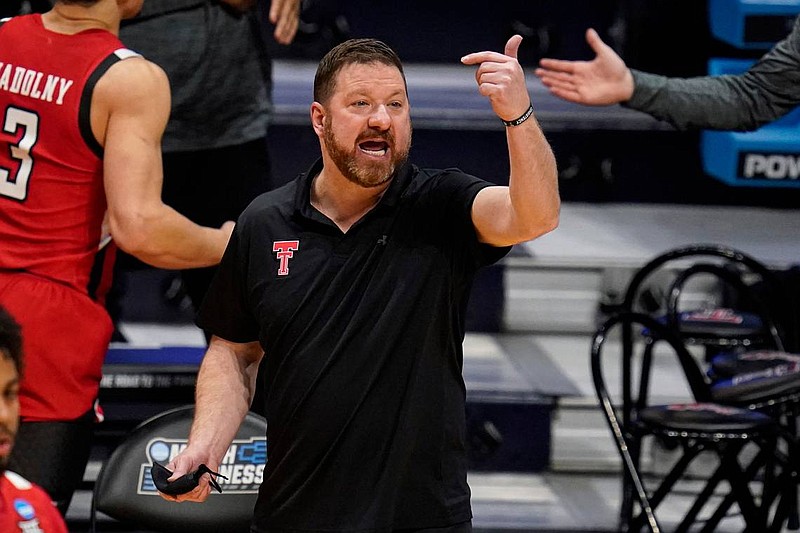 Texas Tech head coach Chris Beard signals to his team as they played against Arkansas in the first half of a second-round game in the NCAA men’s college basketball tournament. (AP Photo/Michael Conroy)

By bolting to Austin, its seems Beard left some rough feelings out on the high plains of the Lone Star State.

“It’s been a whirlwind of a day,” Beard said Thursday in a statement released by Texas. “It’s a difficult and emotional day in a lot of ways as I leave Texas Tech, a place where I’m very appreciative of not only my five years as a head coach but also my 10 years as an assistant. I owe so much to Texas Tech University.”

Texas didn’t announce the hire until after Texas Tech athletic director Kirby Hocutt discussed it in a mid-afternoon conference that dripped with frustration after news of the move began to leak.

Hocutt said Tech officials had engaged Beard about a longterm contract, but never had an opportunity to counter the Texas offer. The Tech AD said Beard told him he was ready for a new challenge.

“Frustration? Absolutely. Disappointment? Absolutely,” Hocutt said. “You know, you work along(side) somebody for five years and you invest into this program and you grow this program. And, of course his leadership had a great deal to do with that. But, you know, at the same time there are other components that have led to the success of Texas Tech basketball.”

Hocutt said Beard told him “he was ready for another challenge. I don’t fully understand it. It obviously wasn’t for better fan support or better facilities. He told me it was not for financial reasons.” He added that Texas Tech was prepared to give Beard a “lifetime rolling contract.”

“And you have somebody that then walks away to go to an in-conference school, an in-state school,” he said. “Absolutely, that frustrates you. Heck yeah it does.”

Texas did not immediately release terms of Beard’s deal with the Longhorns, but it was clear the school has coveted athe coach who led the Red Raiders to an NCAA Tournament runner-up finish two years ago.

“We’ve all seen what he’s done in building Texas Tech into a national force, recognize his wealth of knowledge and experience, and his track record at every place he’s been is extraordinary,” Texas athletic director Chris Del Conte said.

At Texas, Beard will replace Shaka Smart, who left after six seasons for Marquette after failing to lead the Longhorns past the first round of the tournament in three appearances.

Beard, 48, will be expected to produce consistent postseason success the Longhorns never achieved under Smart, who had led VCU to the Final Four in 2011 and was one of the hot names in coaching when Texas hired him.

Beard was 112-55 in five seasons with the Red Raiders. He was named The Associated Press coach of the year in 2019 as he guided Texas Tech to a 31-7 finish and lost to Virginia in the national championship game. The Red Raiders made it to the second round of this season’s tournament.

The Longhorns last made the Final Four in 2003 but made tournament appearances 16 times under Rick Barnes from 1999 to 2015 and reached the regional finals in 2006 and 2008. Texas hasn’t made it out of the first weekend of the tournament since then.

Texas entered this season’s tournament as a No. 3 seed with a veteran team, but lost in the first round to No. 14 Abilene Christian, which had been playing Division I basketball for less than a decade.

Beard’s coached one season at Arkansas-Little Rock, leading the program to a 30-5 finish and to the second round of the tournament in 2016.

He then accepted the head coaching job at UNLV, before leaving less a month later for Texas Tech, citing a desire to return to the program where he’d spent several years as an assistant under Bob Knight.