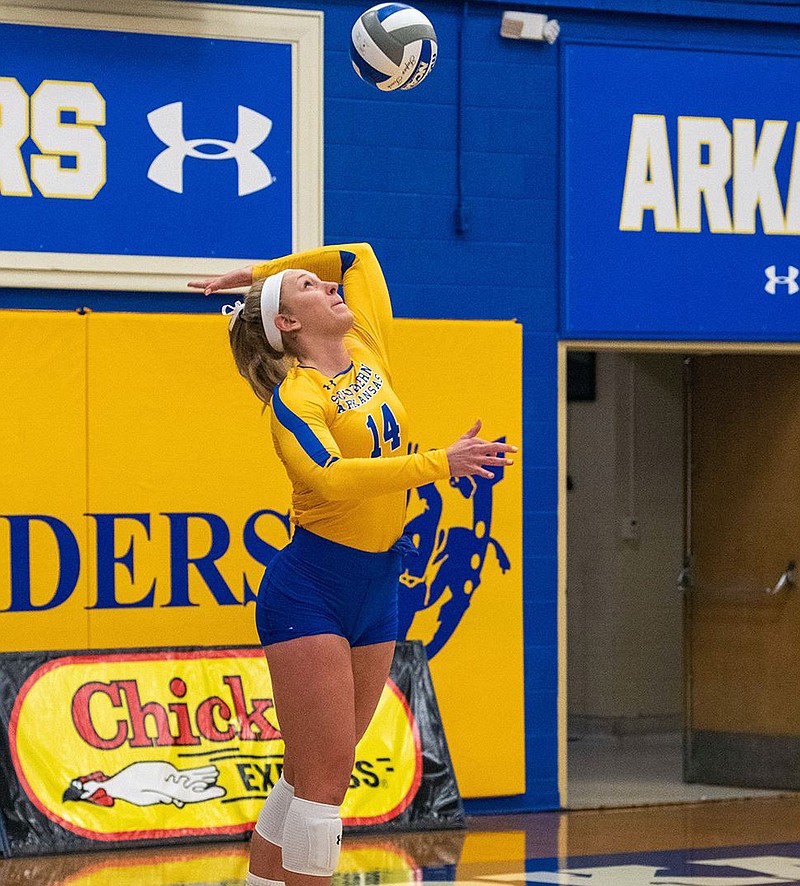 SAU’s Morgan Gross serves the ball during a match. The Lady Muleriders will play in the first round of the GAC Volleyball Tournament at 6:30 p.m. Thursday in Arkadelphia against Henderson State. (SAU Sports)

After closing their regular season Thursday night against sixth-ranked Harding, the SAU Lady Muleriders will compete in the GAC Volleyball Tournament starting Tuesday. SAU, the sixth seed from the Eastern Division, will travel to Arkadelphia to take on Henderson State in the first round at 6:30 p.m.

Against Harding, SAU fell in three sets for the second time to the Lady Bisons. The Lady Muleriders got off to a slow start in set one and were unable to recover, losing set one 25-10 before dropping the final two sets 25-19 and 25-13.

Morgan Gross led all players with 11 kills with a .364 attack percentage. Morgan Schuster recorded 26 assists and seven digs and libero Bailey Kirk added seven digs of her own.

In related news, White received the GAC Offensive Player of the Week honor for her exploits against Arkansas-Monticello. The freshman tallied 19 kills and only had one attack error against her for a total attack percentage of .581.

She became the first Lady Mulerider to receive the honor under head coach Lindsey Parks and the first to receive a weekly conference honor since Taylor Reaume got it on November 17, 2015.

In her rookie campaign, White has tallied 83 total kills, averaging 2.86 per set and she owns a .175 attack percentage, both of which are second on the team.