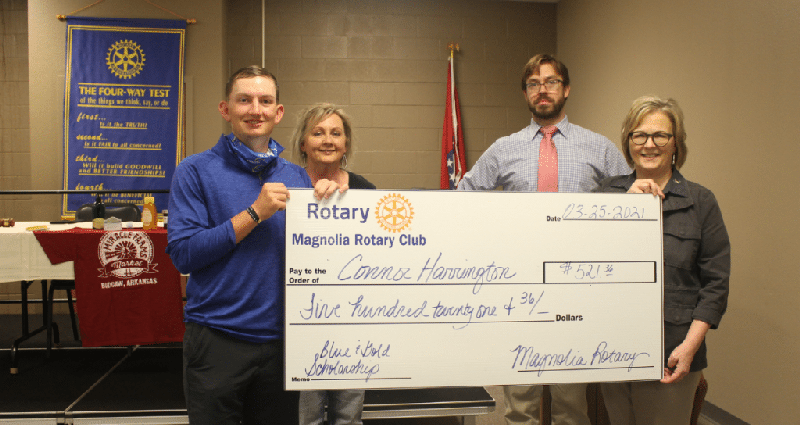 The recipient of the Magnolia Rotary Club Scholarship for the 2020-2021 academic year is Connor Harrington. Connor is a sophomore from Magnolia, Arkansas. He graduated from Magnolia High School in 2019 and is pursuing a degree in Mathematics Education with an emphasis in coaching. Connor is a member of the SAU Men’s Golf Team and serves as the Men’s Golf Representative for the Student Athlete Advisory Committee. He has been named to the President’s List for two semesters and the Dean’s List for one semester. Following graduation, Connor plans to become a Baseball Coach while teaching Math at the high school level.

Connor shared, “Receiving the Magnolia Rotary Club Scholarship truly means the world to me. I am especially grateful to have been raised in Magnolia and to be a student athlete at SAU.”

The scholarship is intended for a student who resides in Columbia County and is active in the local community. To qualify, applicants must have evidence of financial need and a minimum GPA of 2.5. Preference will be given to the sons and daughters of Magnolia Rotarians or graduates of high schools in the Magnolia area.

“The Magnolia Rotary Club Scholarship Endowment is making a lifetime of difference to SAU students. This endowment has been supporting student scholarships and will continue to do so in the future,” stated Macy Braswell, SAU Foundation Executive Director and member of the Rotary Club of Magnolia.

This gift was a part of the University’s Love and Loyalty Campaign, an effort that is in its fifth and final year seeking to raise $22.275 million. Increasing the number of scholarship endowments available through the SAU Foundation is a major focus of the campaign. For more information on the Love and Loyalty Campaign, please visit www.sauloveandloyalty.com or contact the Division of Advancement at 870-235-4078.