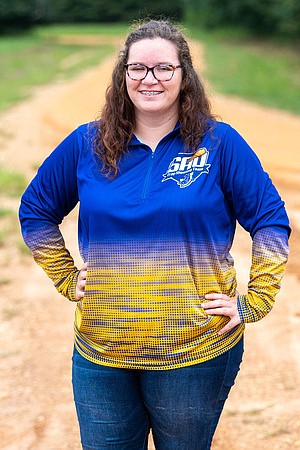 SAU’s trap shooting program began in the fall of 2019, long after Newsom had joined the SAU family. Newsom, from, Paragould, Arkansas, is a junior Animal Science major. “When I chose SAU, I knew that there was not a trap team, but during my freshman year, I heard that they were trying to start one,” said Newsom, who began the sport when she was 12 years old. “I started out trapshooting through the Arkansas Youth Shooting Sports Program (AYSSP), which was hosted by the Arkansas Game and Fish Commission. My senior year of high school, I got more involved in trap shooting and joined the Amateur Trap Association.”

Newsom was a member of Greene County 4-H and was competitive in air pistol, air rifle, .22 pistol, .22 rifle, muzzleloader, and archery. She has qualified four times for the Junior Olympics in Colorado Springs, Colorado, in air pistol.

“Callie is the epitome of hard work and determination,” said Steve Crowell, coach for the 31-member trap team. “She didn’t let the challenges of the season stop her drive. She stepped up and, in head-to-head competition, beat out every other national shooter in her class and age divisions.”

The championship competition offered three events including 100 handicap targets, 50 doubles targets and 200 singles targets. Newsom was among 1,160 classified shooters, many of whom competed in more than one event. In the Handicap Championship, she shot a 99 out of 100 from the 20.5 yard line, landing her in a threeway tiebreaker competition. She won her age division. In the Doubles Championship, she shot an 81 out of 100. The third and final event was the 200 Singles Championship which was held over two days.

Though the score did not put her in the running for champion, she was still able to place in her age division and class, winning Junior Gold Class B Singles Champion. “I was placed in Class B because of my average going into the competition. I also won High Lady Junior Gold Champion, which was determined based on my scores from all three events,” Newsom said. “It felt amazing to receive these honors at this level of competition,” she shared. “For me, it’s as much about having fun as it is about winning.”

Crowell said that with these wins now under her belt, Newsom ranks among the best shooters in the nation.

“We are proud to have her as a part of the SAU Trap Shooting Team,” he said, “and look forward to more competitions.”

In addition to the Trap Team, Newsom is a member of Sigma Alpha. She chose SAU because she loved the thought of being on a small campus that enjoys the support of the community.

“After visiting the campus, I knew this was where I wanted to go,” she said. “If someone is considering making SAU their university home, I would tell them they should visit the campus and be ready to gain the biggest support system because they will have support from the people on campus as well as in the community,” she said.

SAU’s Trap Team competed in February and each member qualified for the national competition which was to be held in March, but was cancelled due to COVID.

The team continues to grow, with nine incoming freshman joining the team. Membership in the trap program is open to any interested SAU student. The team competes in the Association of College Unions International (ACUI) Collegiate Clay Targeting Program and is preparing for the ACUI Virtual Shotgun Bowl Series which will consist of two month-long virtual events in September and October. For more information and to register interest in the program, visit www.saumag.edu/trapshooting.