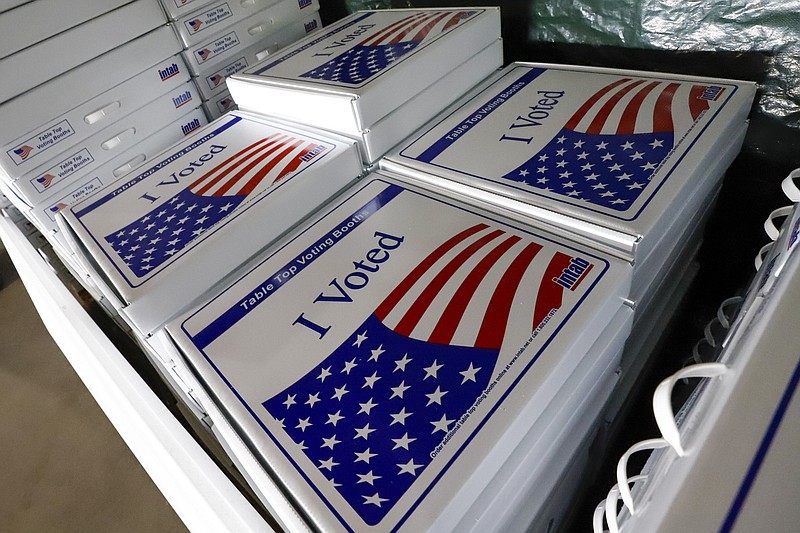 In this June 1 file photo a stack of table top voting booths are stored at the Allegheny County Election Division’s warehouse on the Northside of Pittsburgh. Election officials are bracing for a potentially chaotic election, trying to navigate the risks of voting during a pandemic, a tidal wave of mail ballots and the president fanning skepticism about the validity of the tabulation. - Photo by AP Photo/Gene J. Puskar, File

Political battles and pending court fights threaten to upend months of planning for the pandemic election, election officials are warning. In key states, they remain hamstrung with only weeks to prepare.

Ongoing partisan litigation could dictate dramatic last-minute changes to rules and procedures in several states. Legislatures continue debating laws that could change how votes are processed. Meanwhile, money to pay for counting 150 million or more votes during the pandemic is stalled in Congress.

Time is short. Though Election Day is two months away, ballots are being mailed to voters on Friday in North Carolina. By the end of the month early voting will be underway in states like Minnesota, Virginia and Vermont.

Many election officials in states likely to decide the presidential race — the frontline planners — say they believe they will be ready. But in interviews they also warned of a worrisome uncertainty that could undermine efforts to run a safe, fair and accurate election.

“I’ve got a growing list of things that I’d normally do, but I can’t,” said Forrest Lehman, elections director in central Pennsylvania’s Lycoming County.

Lehman says he’s been scrambling since the coronavirus hit in March. He’s recruited dozens of new poll workers to replace those who may be vulnerable to infection. He’s ordered supplies to ensure in-person polling stations can be clean and safe. His four-person office bought a new $11,000 machine that opens envelopes to prepare for an expected avalanche of mail ballots.

Still, he’s braced for trouble. In Pennsylvania, courts have yet to decide whether the state can expand the use of drop boxes to collect ballots, if mail ballots need to be received or just postmarked by Election Day, and who’s allowed to monitor polling places. The legislature is also considering a change to election procedures.

“We don’t know what the rules are,” Lehman said.

At least 170 lawsuits have been filed across the country over voting procedures, many by groups tied to the two major political parties or by the parties themselves. Some still pending this year could have major consequences.

In Wisconsin, a judge has yet to rule on a Democratic lawsuit seeking several changes, including lifting the state’s requirement that voters provide identification to get absentee ballots. In Nevada and Montana, the Trump campaign is suing to prevent the states from sending out mail ballots to all voters.

Rulings can set off confusion. In Iowa, two judges last week invalidated 64,000 absentee ballot requests that they said were improperly filled out, after the Trump campaign sued. Democrats asked another judge to rule them valid.

It’s not just lawsuits. In several states, lawmakers have been unable to agree on new procedures, including recommendations from often-nonpartisan election officials.

Among the most pressing is when election officials can count the vote. In Michigan, Pennsylvania and Wisconsin, states that could determine the presidential race, election laws bar officials from processing mail ballots before Election Day.

Election officials in those states have warned for months that those laws will not only slow the tally of mailed ballots, but could fuel distrust in the outcome.

The laws ensure that the first publicly available numbers will be a count of in-person voters, who are more likely to be Republicans. The full number of Democratic votes — and the ultimate winner of each state — could come days later. That could leave Americans with a distorted impression of the results for days.

Republicans have resisted changes to those laws, arguing there’s no need to revise long-standing statutes and contending it could make the system vulnerable to fraud. In Pennsylvania, the legislature is debating a bill to allow earlier processing, but it’s unclear the measure will pass and be signed by Democratic Gov. Tom Wolf before Election Day.

In Michigan, election officials have also been pleading unsuccessfully with their Republican-controlled legislature to change the law on mail processing. Jocelyn Benson, the Democratic secretary of state, said her office is now looking for other ways to help local clerks speed up the count.

One big target is Detroit, which stumbled badly in mail ballot counting during last month’s primary. In more than 70% of the city’s precincts, the number of counted absentee ballots did not match the number recorded. The state’s canvassing board has called for Benson’s office to take control of Detroit’s elections in November, and on Wednesday her office announced it will jointly oversee the voting along with the city.

“They got tired. They didn’t care. They threw everything in a box and left,” Winfrey said.

Errors like that could have disastrous consequences in November.

Trump has spread distrust of mail voting among Republicans, baselessly claiming it could lead to massive fraud although that has not occurred in the five states that regularly mail ballots to all voters. On Wednesday, Trump encouraged voters in North Carolina to attempt to vote twice — both by mail and in-person — as a way to test the system. Voting twice is a felony in the state.

Later, Trump slightly walked back those comments, tweeting that people who vote early by mail should show up at polling places and vote again if their ballots haven’t been counted

“We’re faced with the president undermining vote by mail,” said Arizona Secretary of State Katie Hobbs, a Democrat. “It’s just another level of misinformation we have to contend with.”

Hobbs said a big part of her election preparation is countering misinformation on social media. Her office has been contacting Facebook about misleading posts and trying to get a verified blue check mark on local election offices’ Twitter accounts, so voters know the information from those accounts are legitimate.

Adding to the chaos is rapper Kanye West’s quixotic presidential bid. Lawsuits trying to remove or insert West’s name on the ballot could delay the printing of ballots in states like Arizona, Ohio, Virginia and Wisconsin.

Amid the uncertainty, election officials have tried to focus on what they can control and learning lessons from the chaotic spring primaries.

In Milwaukee, election officials expect to have most of the city’s 184 polling stations open for the general election. Only five polling places were open in April and lines stretched for blocks.

The Wisconsin Elections Commission has ordered 125,000 masks, 130,000 pairs of gloves, 5,600 spray bottles to hold 10,000 liters of disinfectant. It has purchased 1 million pens so all voters get their own and 6,000 rolls of painter’s tape to mark floors to ensure social distancing.

In Florida and North Carolina, election offices filed requests with their emergency management counterparts to get protective gear.

“The pandemic makes it feel like you’re becoming a healthcare administrator as well as an election official,” said Claire Woodall-Vogg executive director of Milwaukee’s elections commission.

It’s been hard to pay for these new expenses, and election experts say states have had to defer public information campaigns or take other steps to handle the cost. Congress allocated $400 million in election aid in the spring, but another $3.6 billion that the Democratic-controlled House passed has been stalled by the Republicancontrolled Senate.

Charities have stepped into the void, as Facebook founder Mark Zuckerberg and his wife, Priscilla Chan, donated $300 million to foundations that had already started ending millions to help cashstrapped election offices.

Philadelphia, which received $10 million in those initial grants, hopes to have close to its typical number of polling places open — about 800, said spokesman Nick Custodio.

“We’re going to try to have as normal an election as possible,” Custodio said.