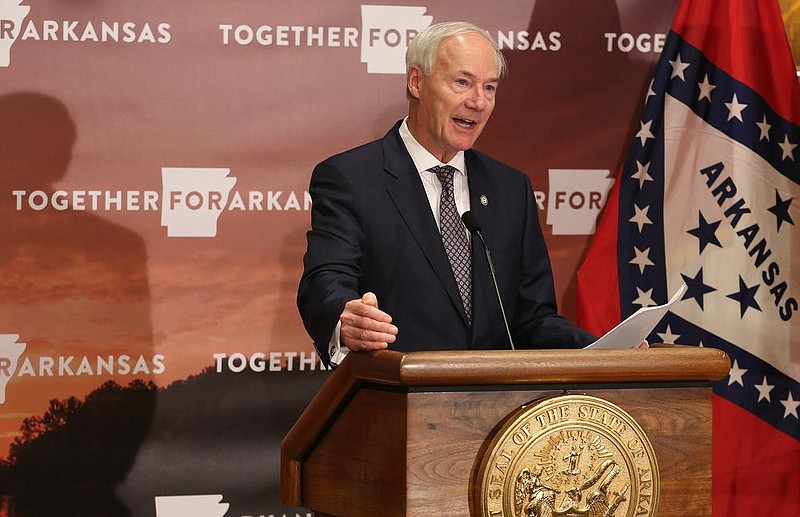 Gov. Asa Hutchinson talks about new cases of COVID-19 during the daily cover-19 briefing on Wednesday, Sept. 1, 2020, at the state Capitol in Little Rock. - Photo by Arkansas Democrat-Gazette/Thomas Metthe

LITTLE ROCK, Ark. — A group of Republican lawmakers in Arkansas filed a lawsuit Thursday challenging the state’s mask mandate and other coronavirus restrictions, even as the state reported one of its highest one-day increases in virus cases and deaths.

The 18 lawmakers asked a judge to rule that the Health Department’s directives issued since the pandemic began are invalid. They argue the orders require legislative approval.

Arkansas was one of a handful of states that didn’t issue a stay-at-home order, but has dozens of other restrictions in place.

Republican Gov. Asa Hutchinson said it’s unrealistic to delay health guidelines for weeks as they go through legislative review in the middle of an emergency.

The Department of Health reported 969 new confirmed cases of the coronavirus, bringing the state’s total since the pandemic began to 63,081. The state reported 20 new deaths from COVID-19, the illness caused by the virus, bringing its total fatalities to 861.

The highest number of new cases, 211, came from Washington County, where the University of Arkansas is located. The department said most of those cases were among people who were 18 to 24 years old. The university has said it has nearly 400 active cases on its Fayetteville campus.